Philip Taylor sits on a swiveling stool behind his desk, a worn trucker hat with an image of a fish perched on his head. The breeze blows a few loose wisps of his sandy brown hair; the rest is gathered into an unruly ponytail that grazes the collar of his down vest. Taylor, who by day is a research associate in rainforest ecology at the University of Colorado Boulder and a postdoctoral fellow at Duke University, pauses to take in his office for the afternoon: a dusty swath of Black Cat Farm that overlooks the fertile foothills of north Boulder County.

The 34-year-old drags his desk into the Colorado sunshine as often as he can. On this pleasant April day, he rests his gaze on the greenhouse to his left. Taylor, a native of Rising Sun, Maryland, spent months of his free time building the 1,800-square-foot structure. He cleared the land, leveled it, dug postholes, sunk the poles into concrete, and finally, in mid-February, hosted a sort of barn-raising to bring the hoop house—and his plans—to life.

As a way of baptizing the greenhouse and, perhaps, as a gentle reminder of what’s at stake, Taylor nailed a metal sculpture of a fish to a plywood plank just outside the door. Inside, it’s 95 degrees—hot enough to produce beads of sweat in just a few minutes. It also happens to be what he considers the ideal setting to breed thousands of nonbiting black soldier flies.

After plenty of trial and error, Taylor has the greenhouse buzzing with the bugs, which mate and die about every 30 days. Every so often, Taylor stands up from his desk, slides open the greenhouse door, and steps into the humid heat to survey the scene. These fast-producing, protein-rich insects are, Taylor believes, the key to solving the problem of ocean sustainability.

The world’s oceans are vast and from a distance appear mighty—but dive deep and you’ll find an ecosystem that’s fragile and vulnerable. Just as on land, there’s a natural food chain: Big fish eat medium fish, and medium fish eat small fish. Strip out the bottom layer, however, and eventually everyone goes hungry—which is what civilized society has been doing for the past 50 years.

Every pound of farmed fish we eat requires five to 10 pounds on average of small, wild fish—such as herring, anchovies, and sardines—to raise it. Across the globe, fishermen trawl the water catching these little guys (25 million tons, or one-third of the global fish catch annually); they grind them up into meal and pellets and feed them to the big farmed fish so that they get nice and plump and we can eat them for dinner.

Relying on wild, ground-up small fish to sustain fish farms is helping push the ocean’s delicate ecosystem toward collapse (along with other things, including the widespread effects of climate change). And demand for this type of feed extends beyond the water: Fish meal, which is rich in protein, fat, and omega-3 fatty acids, makes up a portion of hog and chicken feed. Each year, millions of tons of fish are ground up to feed land animals so we can enjoy chicken breasts and pork chops. In a way, the ocean’s little fish are feeding much of the world.

During the past couple of decades, scientists have arrived at a quasi-solution: soy. But while replacing ground-up fish with ground-up soybeans takes pressure off the oceans, the resource-intensive crop comes with other environmental consequences. Farming soy requires massive expanses of land (which contribute to the destruction of the rainforest) and huge amounts of water, not to mention fertilizers and chemicals—all for a bean that’s relatively high in protein but only partly digestible for fish, chickens, pigs, and even humans.

That’s where Phil Taylor comes in. Taylor grew up roaming the waters and fishing the tributaries of the Chesapeake Bay. One of his favorite fishes is printed on his cap: the legendary blueback river herring. But despite being an avid fisherman, he’s never caught one; in fact, the fish is so endangered that he’s never even seen one. To Taylor, the fish symbolizes both destruction and hope: He recounts his grandfather telling him stories of the herring running so thick you could almost walk on the water. “The herring is gone because of human consumption,” Taylor says. “But it’s unbelievably fecund if left alone and the ecosystem is healthy.”

Fishing has always been more than a sport for Taylor; it’s his gentle way of slipping into nature’s rhythm. Being in tune with the ocean’s natural equilibrium has given him firsthand experience with collapsing fisheries, and for years it’s something that he’s wanted to help amend. “The problem Phil is trying to solve—the depletion of the ocean’s small fish stocks—is massive,” says Eric Skokan, the Boulder restaurateur, farmer, and owner of the land on which Taylor’s greenhouse sits. “Even if one percent of fish stocks could be saved, that’s a staggeringly large number. We’re talking endless train loads of small fish being used up every day.”

The rainforest led Taylor to black soldier flies. As a research biologist, Taylor spends a fair amount of time in places such as Costa Rica, Indonesia, and Malaysia studying the effects of climate change and human impact on the rainforest ecosystem. Through his research, he’d become frustrated with the palm oil industry (which brutalizes the forest), and he was voicing his frustrations to a friend who mentioned he should explore more sustainable industries, like insects. As Taylor puts it, he “bit the hook.” 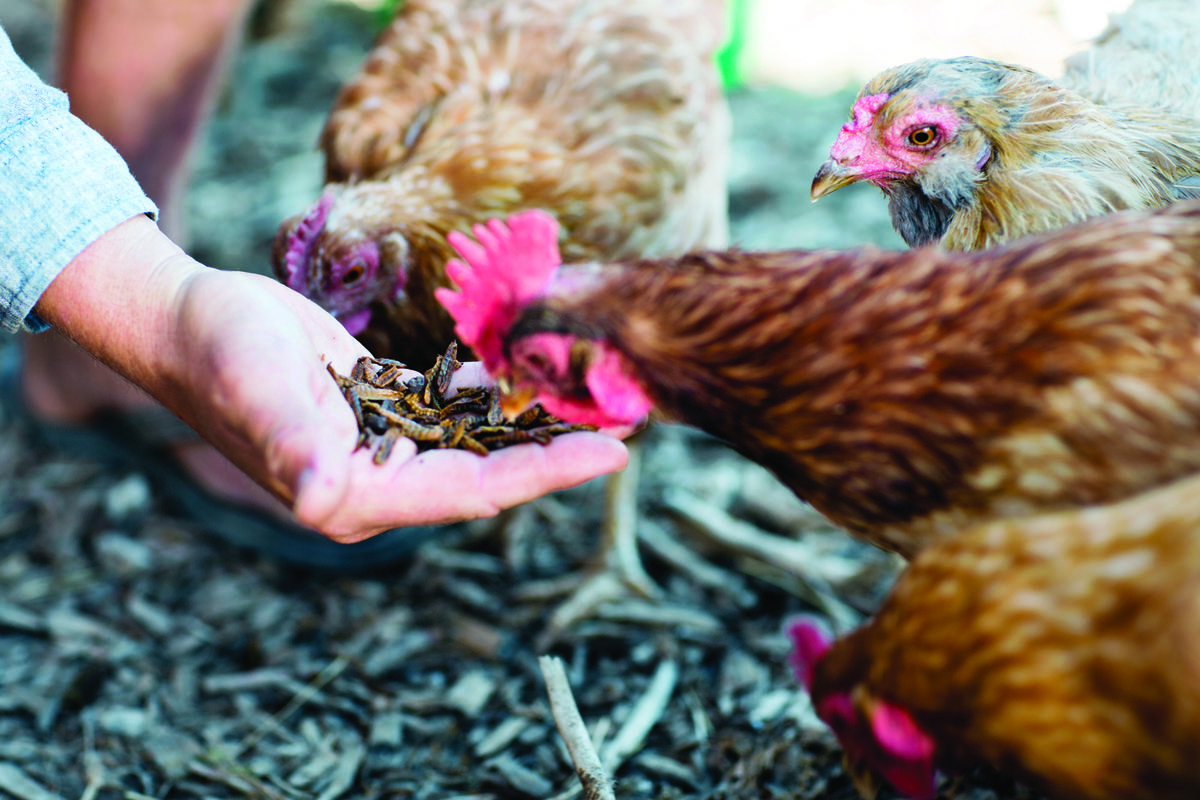 The black soldier fly’s sole mission is to eat and mate; females have the added responsibility of laying eggs (600 or so each) that produce larvae. And that larvae can be ground up into high-fat, high-protein feed for fish and animals. In their equatorial habitat, the insects can easily produce 100 times more protein in a year than a crop of soybeans on the same amount of space, and colonies require no arable land, no fertilizer, and very little water. The bugs also feed on food scraps, which helps with another growing problem: As much as 40 percent of America’s food supply is trashed annually.

The more he learned about the flies, the more Taylor believed they could be a viable alternative to conventional fish and animal feed. All he had to do was find a way to replicate the flies’ natural breeding environment—a challenging task that other scientists had attempted unsuccessfully. Taylor tapped his knowledge of the rainforest and, in his free time, started with a makeshift lab in his garage and various light bulbs from the hardware store. He hoped to simulate the right light spectrum and activate the flies’ unique mating ritual. “Forest canopies are proportionally rich in UV light beneath their leaves,” Taylor says. “Flies use their wings in a mating ritual based on UV light.” After a few adjustments, the colony began to reproduce. This past spring, Taylor submitted a paper on his findings to the Journal of Insects as Food and Feed, and he expects the work to be published this fall.

Having figured out the keys to black soldier fly reproduction, Taylor needed to test his theories in a real-world way. He contacted Skokan, whom Taylor had gotten to know because their children attend the same school, and asked if he could build a greenhouse on his land. “Phil and I, we’re really similar in that we have a lot of weird, harebrained ideas,” Skokan says. “He’s swinging to hit a home run.”

In fly terms, reproduction means larvae and, eventually, more insects. In Taylor’s system, as the larvae fatten up on food waste, he allows only five percent to become flies (those are the bugs that will breed and ensure the colony’s future existence). The remaining 95 percent are either fed to chickens or ground up into high-protein feed destined for fish, chickens, and pigs. Skokan’s livestock have been the happy recipients of Taylor’s labor since May.

Other companies, including a large Canadian company called Enterra and a small start-up in Kenya called Kulisha (“to feed” in Swahili), are chasing the same alternative animal feed idea. The founders of Kulisha recently spent a week with Taylor in Boulder. For his part, Taylor strongly believes in the value of sharing intelligence (hence his paper on black soldier flies’ ideal mating environment). “Solutions to major problems don’t do anything unless they’re put into practice,” he says. “I’m a ‘rising tide lifts all boats’ kind of guy.”

For starters, Taylor is thinking small and local: With his help, a farmer could set up a fly farm, feed wasted food to the insects, and then use the resulting larvae to satiate the farm’s chickens, pigs, or fish. This model accomplishes two things, says Aaron Hirsh, a research associate in CU’s Department of Ecology and Evolutionary Biology: “It recycles the lost value of food and takes the pressure off of fish populations in the ocean.” The system can be replicated anywhere there’s a source of food waste (a restaurant, a grocery store) and someone nearby who can use the final product.

In May, Taylor hired his first employee, Xavier Rojas, who helped found the Boulder Food Rescue and has an intense interest in reducing waste. Rojas is in charge of managing bug production and obtaining food waste for the greenhouse on Skokan’s land.

Taylor also recently returned from Blue Hill at Stone Barns in New York, the hallowed restaurant and 80-acre working farm that sits on land once owned by the Rockefeller family. Through his work, chef and co-owner Dan Barber has become a global advocate for agricultural change. He wrote The Third Plate: Field Notes on the Future of Food, which won a James Beard book award in 2015, and he has given multiple TED Talks on related subjects.

Taylor’s and Barber’s paths first crossed at a book signing in Boulder last year, and they met again this year at Stone Barns. Taylor says farm director Jack Algiere is interested in implementing a black soldier fly processing system, and Taylor’s hoping to help them design it. If the Stone Barns project comes to fruition, it has the potential to catapult Taylor’s small-scale project into the mainstream—which would be a significant boost toward Taylor achieving his goal of impacting the feed industry and starting to help restore the ocean’s balance.

In a very real way, Taylor is living out the mantra of one of his favorite poets, Wendell Berry, who wrote “Manifesto: Mad Farmer Liberation Front,” a satirical poem about the sorry state of agriculture. Taylor, who sometimes refers to himself as the “mad farmer,” carries Berry’s stanzas around for inspiration. The last line of the poem, “Practice resurrection,” is reflected in the name of Taylor’s new insect feed company: Mad Agriculture. Those words—and that reminder—sit on his trucker hat, just below the forked tail of the blueback river herring.