People become vegan for many reasons, whether it’s out of concern for animal welfare, a growing waistline, or, increasingly, climate change. As we now know, meat production has a major environmental impact, generating about 14.5 percent of the earth’s total greenhouse gas emissions thanks to factors like deforestation, transportation, the large amounts of food needed to feed the animals, and the methane emissions from the animals themselves. You could argue that if everyone went vegan, the world would be a better place for it. So why don’t we? In short: we love the protein, mouthfeel, and taste we get from meat.

Enter Ethan Brown from Beyond Meat. When Brown founded the company in Columbia, Missouri in 2009, his goal was to use plants to replicate animal protein directly. He reached out to researchers at the University of Missouri who were already pursuing the science, and convinced them to partner with him to develop products for mass consumption.

“Looking at the issue of how do we sustainably and humanely provide protein for this growing planet, we realized that if you take the cow out of the equation you can remove an enormous bottleneck,” Beyond Meat’s director of marketing Will Schafer says. “What the cow is doing is turning plant matter into meat. Can you skip the cow and make it by finding a component part to its meat in the plant kingdom? It turns out you can and that’s what we’re doing.” The company is intentionally elusive about the technological process, but it involves using vegetable protein to replicate a meat-like fiber.

Beyond Meat’s first product was a convincing chicken strip that began selling at Northern California Whole Foods in 2012. Then came a beef crumble in 2013, and last year, the Beast burger, a frozen patty that resembles a more traditional veggie burger and is best described as a nutrition shake on a bun. The product that will change the company forever launched this past May in Boulder, Colorado: the Beyond Burger. It’s a raw patty that looks, cooks, and tastes like fresh beef. 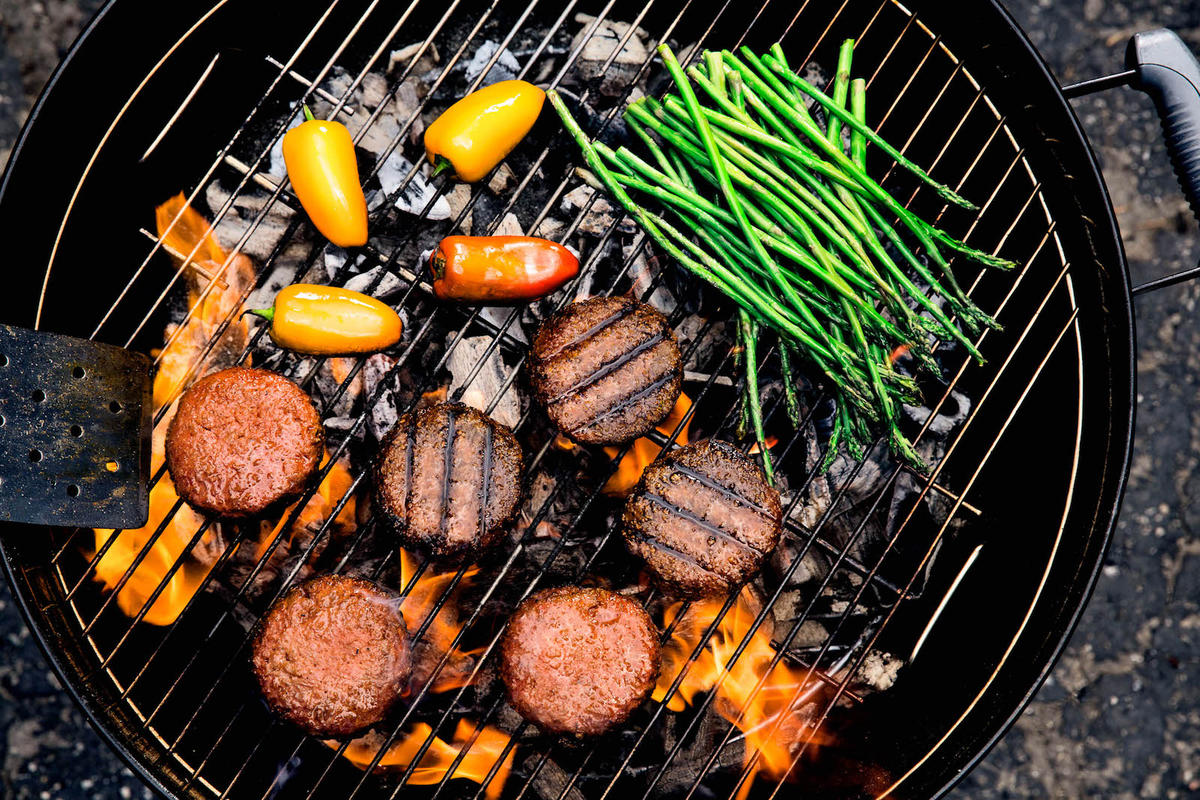 The Beyond Burger is currently sold at only 11 whole Whole Foods nationwide, nine of which—Pearl Street, Superior, Baseline, Alpine, Belmar, Capitol Hill, Tamarac, Colfax, and Washington Park—are in the Denver-Boulder area. The burgers are completely soy-free, gluten-free, non-GMO, and contain 20 grams of pea protein. Stocked in the refrigerated meat section at stores, the pre-formed patties resemble quarter pounds of raw beef (two for $5.99). Throw one on a greased pan or the grill and watch the outside brown as the inside changes color. Be careful not to overcook it—you want the inside to remain a pink “medium-rare,” so that when you cut it open, the beet juice may even “bleed” a little. Raw, it smells like something you can’t quite place, but once properly cooked, it tastes like ground beef should, with an impressively similar texture. There’s been buzz surrounding the burger for some time, and I was surprised when it actually lived up to the hype.

In addition to making the meat analogues, Beyond Meat supported Whole Food’s development of a Beyond Burger restaurant inside Boulder’s Pearl Street location. There, you can have your burger cooked to order alongside other vegan, 100-percent plant-based foodstuffs from throughout the store. Order a single or a double topped with a slice of Field Roast Tomato Cayenne Chao, a coconut based cheese seasoned with fermented tofu that actually melts. For a side, try the sweet potato hush puppies or the millet tots from Rollingreens. After visiting, you can’t help but wonder: Is this vegan fare the fast food of the future? 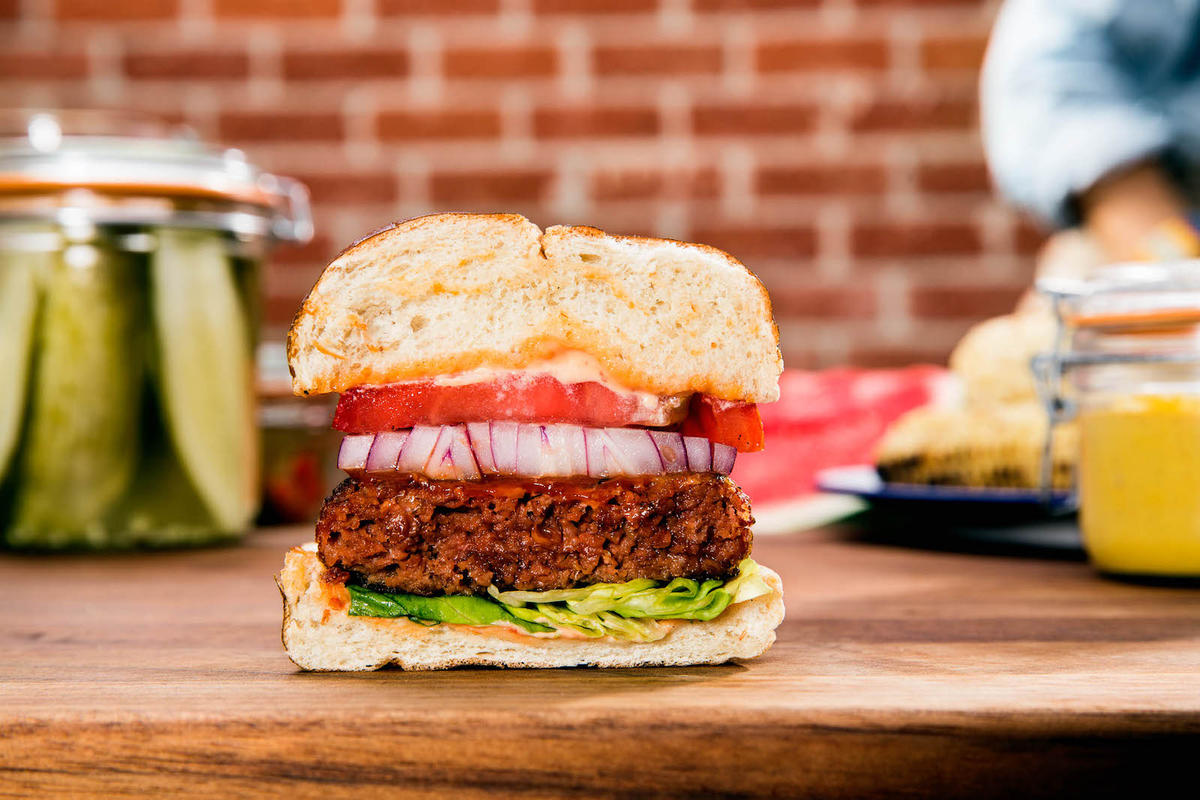 With the help of Whole Food’s regional vice president for the Denver area, Tom Rich, Beyond Meat settled on Boulder as the launch site due to the city’s progressive and environmentally-conscious reputation (Rich is also the brains behind the in-store burger bar). “Boulder is known for being open-minded and full of trailblazers who are willing to try new things,” Schafer says. “We love that, but we can’t rely on that for everywhere we go in terms of our national expansion.”

So far the burger has been introduced in Colorado and the Washington, D.C. area, where it has sold well. Beyond Meat hopes to have the Beyond Burger patties for sale in every Whole Foods by fall, and the company is already in talks with restaurant chains interested in adding it to their menus.

“The idea with the burger and the restaurant is to bring more carnivores—happy meat eaters who don’t like some of the downsides of eating meat—into the category of plant-based meat,” says Schafer. “And sales have blown our expectations out of the water.”

Now, it’s a matter of scale, and the company is being forced to ramp up production in a big way to stay ahead of competitors with similar products like Impossible Foods. As a former vegetarian of seven years and someone who’s well-versed in meat alternatives, I’m confident in Beyond Meats’ success. And although I’m not a vegetarian anymore, I’ll likely turn to the Beyond Burger the next time I’m craving beef.