Even on Broadway, where the number of restaurants rivals the plethora of hipster boutiques, finding a reliable breakfast place—or lunch that’s not tacos or pizza—has long been a challenge. No more. In June, Moxie Eatery opened just south of First Avenue and has been pleasing fans with a.m. eats such as avocado toast with a sunny-side up egg. At lunch, sandwiches and salads populate the menu: The acorn squash sandwich with black beans, avocado, pickled onions, pico de gallo, and cashew chipotle aïoli eats like a hearty torta, and a salad bowl with a falafel waffle (which could have been a wee bit crispier) comes with excellent fattoush and cumin yogurt. Moxie is the brainchild of Dylan Moore, longtime owner of the now-closed Deluxe and Delite. He knows good food, and at this new-ish spot, nothing on the menu costs more than $12. Now that’s moxie. 70 Broadway, Suite 150, 303-524-9236

When ordering at this casual, counter-service spot in Ruby Hill, go straight for the house specialty: flautas. The filling of your choice—options include deshebrada (shredded beef), potato, and chicken—is stuffed inside a large corn tortilla, rolled into a flute, and deep-fried until crispy. Topped with a drizzle of crema and crumbles of queso fresco (plus whichever sauces and garnishes you pile on at the gratis salsa bar), the flautas, around 10 bucks for four, are a crunchy alternative to traditional tacos. Our go-to order: two potato, two shredded beef, and a side of the brothy bacon-and-chorizo-studded beans. Don’t forget to add a hefty dose of the fiery red salsa. Pro tip: Take your flautas to go and nab a table at nearby Garfield Lake Park for a quiet picnic lunch with a view of the water. 1420 S. Federal Blvd., 303-922-0835

Troy Guard is one busy guy. In the past nine months, he’s opened two new restaurants, he’s reworked two of his existing spots, and he has another location of Los Chingones forthcoming. But if you’re forced to choose one of his nine restaurants, make it two-month-old Mister Tuna on Brighton Boulevard. Taking inspiration from his dad’s nickname, the space—which features a large mural of Guard’s mother and family photos amongst charcoal and gold accents—feels personal. The food is thoughtful, too, with an emphasis on wood-grilling, rotisserie meats, and creative seafood dishes like the salt block of the day (compositions change daily, arriving on two-inch-thick, eight-by-eight-inch squares of Himalayan salt). Despite the beautifully plated and precisely executed dishes, the foundation of the food is humble and comforting—just like Guard’s memories of his dad’s backyard barbecue. 3033 Brighton Blvd., 303-831-8862

We haven’t met an egg sandwich we didn’t like. So when we caught sight of the breakfast bao at Orient Espresso, the cafe attached to Zoe Ma Ma’s Union Station location, we were intrigued. For this portable treat, the kitchen halves a fluffy Chinese steamed bun stuffed with pork belly (or curry chicken or veggies) and adds a scrambled egg and cheddar. Manager Blake Carpenter devised the snack last year to satisfy his craving for an American-style breakfast. It remained a secret staff favorite for months, but the bao was finally added to the menu this past spring. We’re happy it was: The made-to-order sandwich is one of the best breakfasts around. 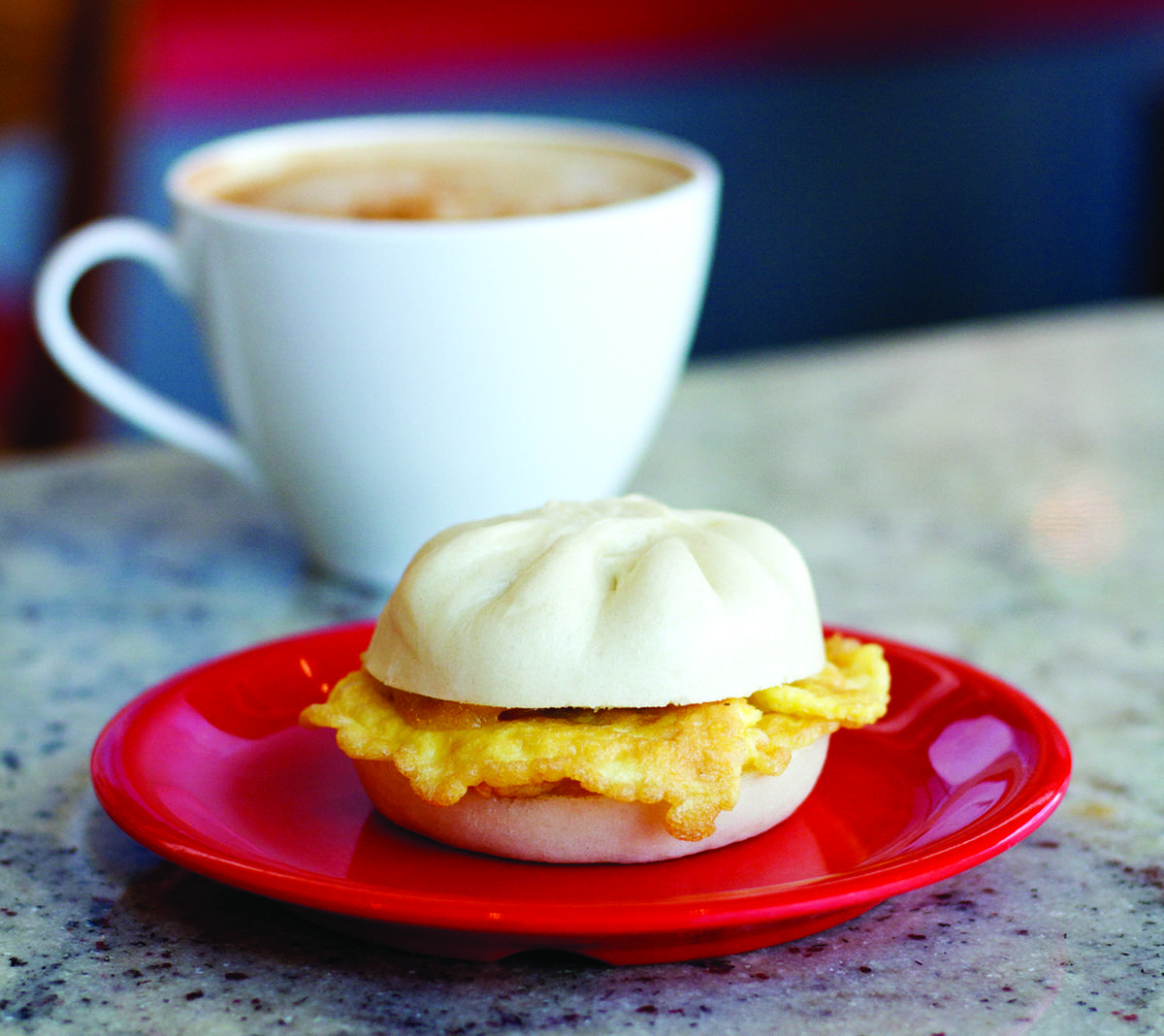