Not so long ago, the British claim of inventing the sandwich went unchallenged by most Western food writers. But in our current age of culinary enlightenment, we’d have to insist on a pretty darn narrow (not to mention ethnocentric) definition of the word to continue giving all the credit to the Earl of Sandwich.

Most of us are by now aware that the Middle Eastern and Indian practice of wrapping flatbreads around various fillings far predates the British claim. So does rou jia mo, a street staple of China’s Shaanxi province that’s estimated to be centuries old, although it’s only now becoming a stateside sensation. Picture chopped, barbecued pork or brisket on a bun that resembles a crumpet but flakes like a pastry, and you get the idea. Better yet, try the version available at New Peach Garden in Golden, which recently landed on 5280’s list of Denver’s best sandwiches.

To be fair, it may come as a surprise that the Chinese bake breads and eat sandwiches—and in fact are among the world’s leading wheat producers. That’s no doubt because China is the exception to the continental rule: Most other Asian countries grow rice almost exclusively and have no bread-making traditions to speak of. Which means that most Asian sandwiches are bound to be works of Asian-European fusion.

In America, the best-known example of the Asian-European fusion sandwich is, of course, the Vietnamese banh mi. Or rather it’s the one Americans think they know best, starting with the fact that it’s a product of colonialism. As Jeffory Alford and Naomi Duguid put it in their seminal 2000 cookbook Hot Sour Salty Sweet: A Culinary Journey Through Southeast Asia, “The French introduced bakery-produced baguettes to their Southeast Asian colonies…and they became an entrenched part of the food traditions.”

But did you know the all-important roll (banh mi actually translates as “bread”) isn’t a true French baguette? It’s a Vietnamese adaptation that incorporates rice flour, which makes it “light, white, with a crisp crust,” in Alford and Duguid’s words, rather than hearty, crackly, and chewy. And did you know that butter is as traditional a condiment as mayonnaise? What about the indispensability of pungent soy-sauce cousin Maggi Liquid Seasoning, according to renowned cookbook author Andrea Nguyen, or the inclusion of headcheese as well as pâté in the classic banh mi dac biet?

Well, now you know—and I’m sorry about that, because you’re going to be hard-pressed to experience the real thing in Denver. Despite the size of the Vietnamese population (and the comparative profusion of pho joints), Denver is shockingly light on banh mi shops. That said, Vinh Xuong Bakery and New Saigon Bakery & Deli both do it right, in my opinion. I’m especially fond of the barbecued-pork version at the former and the sardine sandwich at the latter. 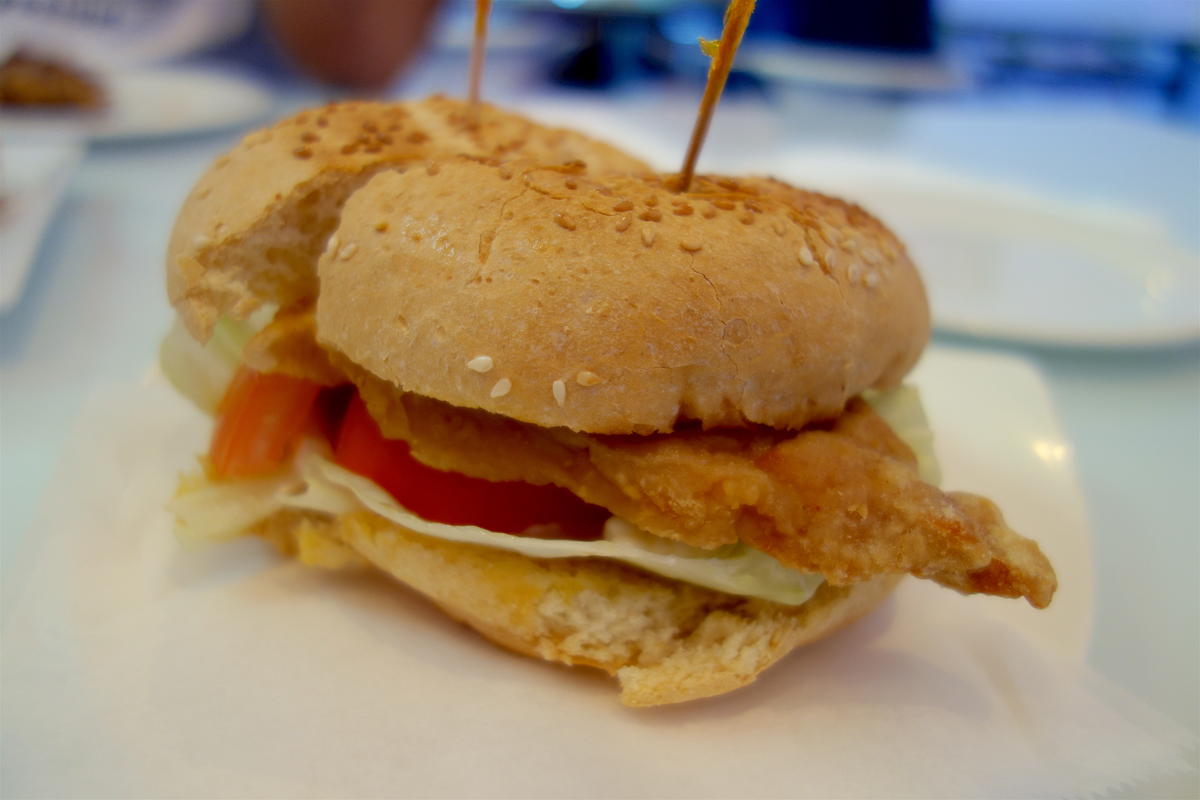 Meanwhile, if the banh mi is the sandwich you may not know as well as you think you do, the Macau pork chop bun is the one you probably know better than you think you do—even if you’ve never heard of it. Its roots (as this Lucky Peach article notes) harken to the sautéed, sliced, mustard-and-chile-spiked pork bifana of Portugal, which colonized the Chinese peninsula of Macau until the turn of the millennium.

The simple pork-chop bun consists of a fried pork cutlet (sometimes breaded, sometimes not) on a bun. And while it evolved from bifana, it might actually bear more resemblance to Iowa’s famed pork-tenderloin sandwich. That’s especially true at the ridiculously charming Hong Kong Cafe on the edge of Aurora (Hong Kong is 40 miles from Macau by ferry). Here, the cutlet is breaded and comes layered with lettuce, tomato and mayo on a sesame-seed bun.

All of this begs the question: Is there such a thing as “authentic”? Though so-called “fusion” cuisine tends to refer to truly original mash-ups (think bulgogi tacos or green-chile bagels), the truth is most of the world’s cuisines are essentially hodgepodges of cross-cultural influence. Which brings me back to banh mi: To say that I regret the scarcity of traditional versions around here is not to say that I despise Americanized ones. If it tastes as though someone cared about what they were doing as they made the sandwich, that’s authenticity enough for me.