Bread as a salad ingredient is nothing new—after all, even the most boring house salads from chain restaurants across America typically include a sprinkling of croutons. But the difference between those uninspired starters and exciting bread salads like panzanella and fattoush is vast. These two classic dishes, which hail from Italy and the Levant, respectively, have an enduring allure thanks to their respect for ingredients and subtle details.

Let’s start with panzanella, which, in recent years, has become a darling of American chefs—but rarely in its traditional form. The Tuscan original is simplicity itself, coming down to two key ingredients: ripe tomatoes and coarse-crumbed country bread, which are often supplemented by cucumbers, onions, basil, red-wine vinegar, copious amounts of olive oil, salt, and pepper. By contrast, here in Colorado, most versions of the dish skew unconventional. Izakaya Den has long gussied its panzanella up with crab meat, pears, and pistachios; Root Down DIA offers a version with apricots, Burrata, and black-currant relish; and River and Woods’ take uses farro, peaches, fava beans, and poppy seed dressing.

What could explain the proliferation of such non-standard recipes? It could be the fact that consistently sourcing those two principal ingredients—high-quality tomatoes and bland Tuscan bread (more on that later)—isn’t so simple. I still remember, living in Boston some years ago, a Sicilian friend who had such contempt for domestic tomatoes that she simply refused to make anything in which canned, imported pomodori wouldn’t suffice instead. Even today, very few places in the United States are rolling in high-quality tomatoes year round—and Colorado, with its short growing season, certainly isn’t one of them. That said, even in Italy, panzanella is a summer salad, and now—at the tail-end of tomato season here in the Centennial State—is the best time to sample the dish in its traditional form.

As for the bread, while various loaves (such as ciabatta) make reasonable substitutes, Tuscany’s cooks rely on “their beloved unsalted bread, known as pane sciocco, meaning insipid,” according to Michele Scicolone in Savoring Italy. “It is made in no other region”—arguably because only the “traditionally frugal Tuscans” would have gone to such “bland” lengths “to avoid paying the high government salt taxes.” 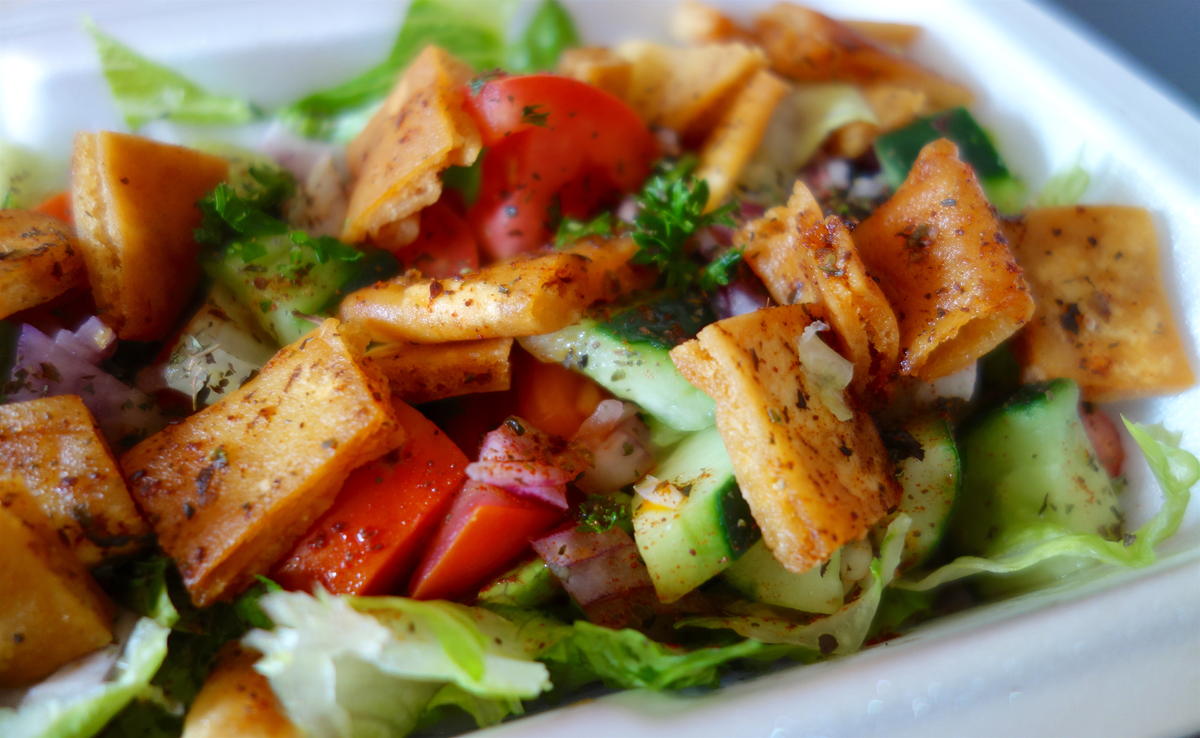 Regardless of geography, it’s likely that cooks began adding bread to salads as an easy way to use up stale pieces (as well as stretch fresh produce). Which brings us to the fattoush of Lebanon and Syria. Mediterranean food historian Clifford Wright says it “developed quite naturally in the Arab world because much of the bread that is consumed there is flatbread, [which] dries out quickly.” In addition to toasted or fried bits of pita, fattoush typically contains some of the same core ingredients you see in panzanella, namely tomatoes, cucumbers, and olive oil (plus salt and pepper). But rather than vinegar, Levantine cooks prefer lemon juice; basil gives way to parsley and perhaps mint, and other greens are incorporated as well. Both Wright and Claudia Roden, author of The New Book of Middle Eastern Food, recommend romaine and arugula; the former also adds watercress or chickweed, the latter purslane or lamb’s lettuce. And veggies such as bell peppers, scallions, and radishes may appear as well, along with garlic and sumac (a spice with a tangy flavor) for seasoning.

Though most of Denver’s Middle Eastern eateries offer fattoush as an everyday staple, tomato season is quickly coming to an end. Now’s the time to fill up on both it and panzanella in all their juicy, tangy, crisp and crunchy glory.