The Draw:
Kyle Mendenhall’s kitchen turns out rootsy, often inventive dishes that go well with a terrific wine, beer, cider, and cocktail program
The Drawback:
Has yet to live up to its vaunted goals of blending traditions into a new definition of American cooking
Don’t Miss:
The toasts, trout, lunchtime chicken salad sandwich, lemonade

More rests on the shoulders of Arcana in Boulder than the success or failure of yet another farm-to-table seasonal new American eatery. Not that a restaurant has shoulders, but you get what I mean: After more than a year of reviewing restaurants in Denver and its abs-fab satellite city, I have to say that Boulder, despite hosting a healthy number of the 25 Best Restaurants celebrated in this issue (page 82), tends toward the conservative. My biggest pleasure this year was the opening of Blackbelly Market’s butcher annex and the fact that the Blackbelly kitchen seems to be moving from strength to strength.

Arcana’s February launch signaled that its owners, Annie and Elliott Toan, had sky-high ambitions. The Toans talked about exploring the roots of American food, all the way back to native eating traditions—foraging, bison, and other stuff that was “Old American”—to boldly define a cuisine that was unflinchingly American. They found the perfect-seeming executive chef in Matt Lackey, whose time with Sean Brock at Husk Restaurant in Charleston connected him to the superstar of cutting-edge wayback cuisine. I found his menu a bit hard to parse, thematically, but it offered Shawnee cake (a cousin of johnnycake, it turned out), wild rice, “embered beets,” pheasant, grits, bison, trout, diverse greens, and lots of pickled things, with dishes that tended to be complicated on the plate: not exactly Southern, not exactly Western, certainly not Old, but interesting nonetheless.

By April, though, Lackey was fired over what local news cited as a “difference of opinion.” The Toans leaned on their seasoned sous chefs and began a new talent search. I tried Arcana a couple of times after the post-Lackey kitchen ought to have calmed down, but results were wildly uneven. Solid offerings such as the house-made breads, a smoky pheasant sausage, a memorable brown-butter corn purée, and a tasty vegetarian plate of quinoa and grilled trumpet mushrooms were overwhelmed by signs that the wheels were falling off: A pork chop was nearly raw; a pile of greens seemed to have been scythed from a roadside ditch; and a bland, chewy $38 bison rib-eye was unsauced but for a giant puck of cold butter. Prices that touched $18 for apps and a breathtaking $40 for the pork chop were over the top.

I won’t pile on, because that’s history since Kyle Mendenhall, an eight-year alum of the Kitchen, came on this summer. (Even the prices seem to have eased a bit.) Six weeks after that hire, Arcana had steadied in the saddle. At the time of this writing, having sampled many very good Mendenhall dishes, it’s too early to predict Arcana’s triumph, or even its final direction, but I’m quite encouraged. 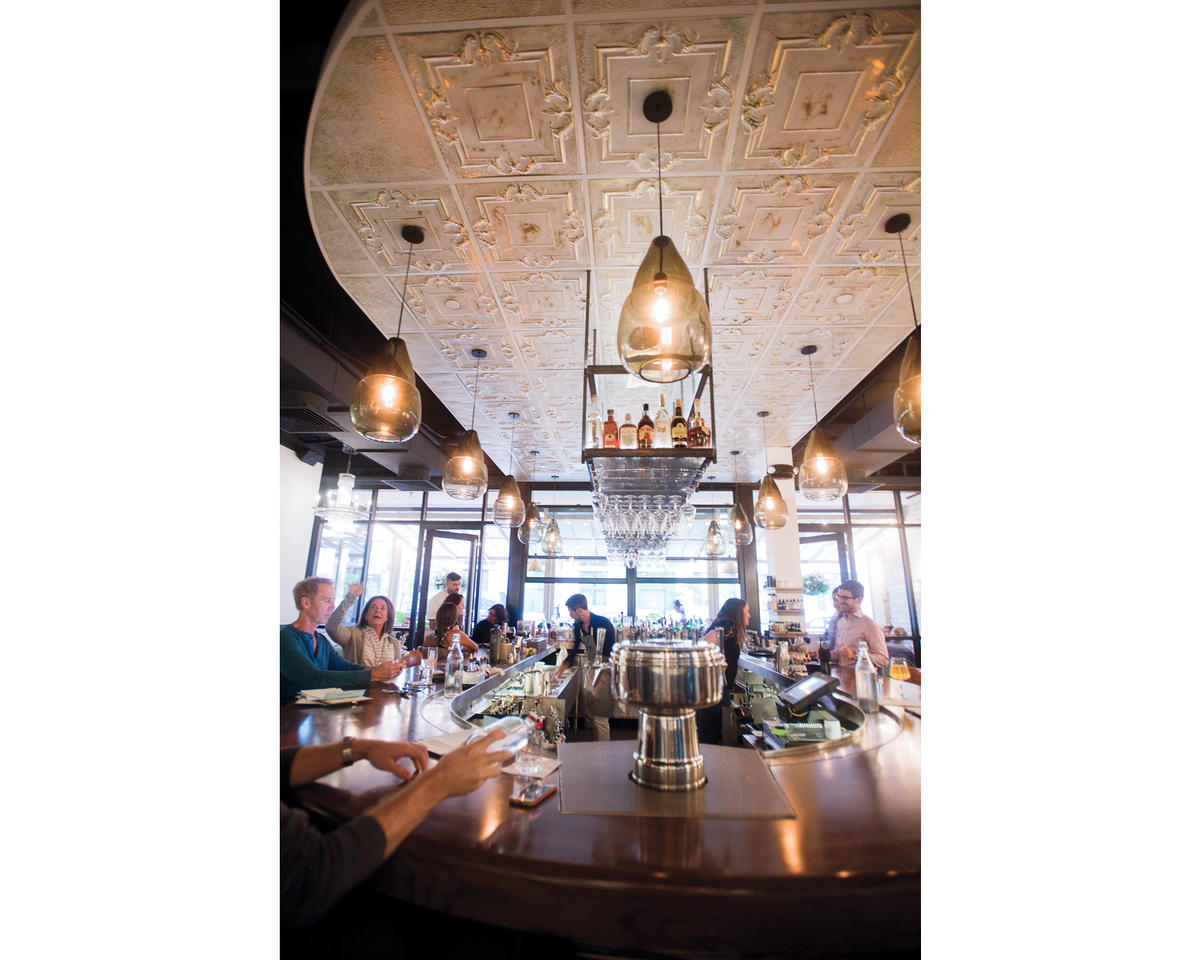 Under Mendenhall’s leadership, the menu was not so much rethought as refocused. Some dishes continued in fresh guises; others were new but not out of tune with the original rootsy–new wave concept. A few signatures, like the blue-corn Shawnee cake, remained. (It tastes like a very good buckwheat pancake topped with barbecue sauce, ham, mayo, and…freeze-dried corn.) Colorado trout was served with a brilliant dandelion cream—proving that bitterness, despite the national IPA obsession, is underused in savory cooking. Smoothed out but not silenced by the cream, the aspirin-bitter greens made the trout (charred skin, succulent flesh) one of the better fish dishes I’ve had in this state. It came with wild rice that reminded me that wild rice isn’t some generic, chewy thing but an often disrespected whole grain.

A deftly cooked, medium-rare lamb sirloin sat on a cool salad of tender beans that had a perfect vinegar edge. Less successful, but intriguing, was the fried pork chop, a sort of chicken-fried, on-the-bone schnitzel (rendered dark as dark chocolate) festooned with fava purée, fava beans, and radish slices. It looked like a stoner’s art project but tasted just fine.

One of Arcana’s foundational strengths is its bread. The lunchtime chicken salad sandwich was a minor masterpiece, elevated by house-made black-garlic bread, which looks like very dense black Russian rye but is both soft and crusty, with a tangy, almost tannic character. Inside were chunks of confit chicken in mayo and a tart cherry preserves. The tomato toast, another entrée, sat on a slice of Benne Loaf, which is bread made from heritage sesame flour milled in the Carolinas. Crunchy toast was topped with a purée of marinated fresh tomatoes, a mix of greens, and dabs of “black pepper mayo.” The dish had an exacting but relaxed summery quality that took me back to the Chez Panisse cafe in Berkeley, California, and that’s high praise indeed. 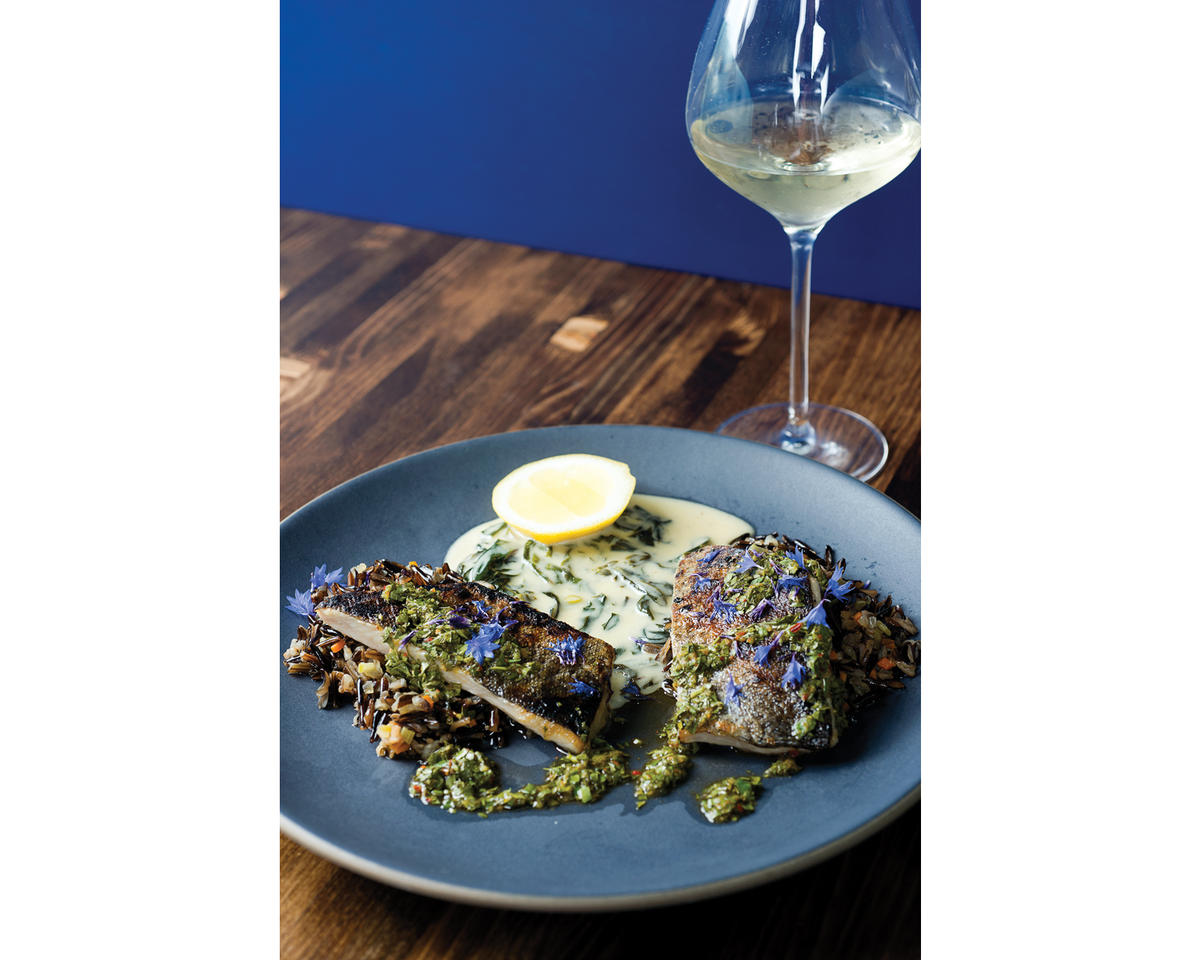 Another strength: Arcana offers a bazillion opportunities for interesting beverage-food matchups. For example, a snappy, salty herb pork sausage was fantastic with Scar of the Sea apple cider from California, which is hopped like a beer and lean like cider from Spain. There were more than a dozen ciders on the rotating list (including three on tap) from Germany, France, Spain, England, and many domestic states. Tieton Cider Works’ sublime apricot cider from Washington was served in a grand TeKu glass, which made me run out and buy more of that cider and four of those glasses.

That’s just the start. There’s a full page of wines by the glass, more than 130 bottled wines of remarkable diversity, and an impressive spirits list. It adds up to one of the deeper, better-rounded alcohol programs I’ve seen—even before you detour into the complicated but solid cocktails. Let me praise, also, the nonalcoholic Arcana lemonade, a sparkling beverage that gets pucker from a vinegary lemon shrub.

My only real complaint about Arcana, other than some long delays on cocktails and apps one evening, concerns a dessert called black and white pudding. The menu specified regionally sourced chocolate, vanilla, gooseberries, and puffed wild rice, but the result reminded me of two instant puddings topped with crunchy bits of stuff that might have been blown off a pastry counter by an evening breeze. Four of us were eating it, and all four sighed and put down our spoons.

Which gave us time to really take in the room. The Toans poured gobs of money into Arcana’s design: The space stretches from sidewalk tables past a large, appealing bar-and-banquettes space to a main dining area with a view of the open kitchen, a facility that chefs in many cramped cities would regard as approximately the size of a bison ranch. I mention the substantial investment because Arcana’s wobbly start must have strained pocketbooks. During none of my four visits was this large restaurant anything close to busy. Without wanting to sound boosterish, I have to say that I hope it survives its troubled start to explore whatever it is that “food migrations and inspirations”—a phrase used on the website—adds up to under the new chef’s reign. Boulder requires more places with this degree of ambition.