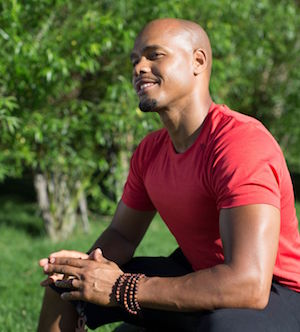 Tyrone Beverly enjoyed teaching yoga at a Denver health club, but the area native—who grew up amidst gang violence in Five Points, Aurora, and Park Hill—knew the pricey gym environment was out of reach for many. So he started teaching for free.

“I immediately noticed this style of programming fit the needs of the underserved in Denver,” says Beverly, 35, who in 2012 founded Im’Unique—a nonprofit that offers free community yoga classes and facilitated discussions. He’s dubbed the chats “Breakin’ Bread, Breakin’ Barriers,” and they address difficult topics such as mental health, race relations, and police brutality.

The organization’s Union Yoga Tour has brought these wellness classes—and their diverse audiences—to museums and stadiums across Colorado, including Mile High Stadium, the Denver Zoo, the Denver Museum of Nature and Science.

On September 10, Im’Unique celebrates its Good Karma Award from Yoga Journal with a free community yoga class at Wings Over the Rockies Air & Space Museum. The magazine and Gaia TV—both based in Colorado—will film the free, family-friendly meetup as a part of the companies’ Live Be Yoga Tour, which is taking place at locations throughout the U.S.

Here, Beverly talks to 5280 about his childhood, Denver’s diversity, and why one of his sessions that started with anger ended with hugs.

Tyrone Beverly: I was five years old when I heard my first gunshot, outside my bedroom window. Being that I was so young, I thought that was a normal experience for everyone. Despite all that was going on, I found so much joy in the city. I was never a paperboy, but I rode my bike around the city like I was. I went from neighborhood to neighborhood, witnessing different lifestyles. The exposure showed me that a person’s environment is extremely important, and there’s more than poverty and violence in the city.

Do you have a memorable moment to share from a recent yoga class or discussions?

We’ve held Breakin’ Bread discussions on police relations [everywhere] from Noodles and Company in Denver to [Hughes] Stadium at Colorado State University in Fort Collins. Many people showed up with very strong opinions on police brutality. The atmosphere was uncomfortable for some, but after the open conversations, people were educated on the deeper concerns of the community. People who previously disagreed were hugging, crying, and looking to make a positive change. Conversation was the starting point to creating a viable solution. We know that for some people, the hardest thing to get rid of is an idea well planted; in this case, new seeds were planted.

What do you think of the relationship between police and citizens in Denver?

I think police-citizen relations in Denver are different for different people. Once a person is given one [a label], one of the easiest things to do is create stigmas, separation, and push people against one another. If we truly want to communicate with people who share different options, we must first listen to what they have to say. Listen to understand—not just to respond; there is a big difference. Almost all our discussions are rooted in addressing misconceptions, stereotypes, and public perception.