It’s been a few days since the latest Rogue One: A Star Wars Story trailer was released, and it’s another two months until the film hits theaters—but don’t despair. You can get your fill of the Star Wars world in the interim with Star Wars and the Power of Costume, which takes over the second floor of the Denver Art Museum (DAM) from November 13 through April 2.

But the DAM has transformed this pop-culture showcase into something entirely new, and more arts-centric, by focusing on the creative process of costume conception and design—providing the backstory for how these outfits, and the characters wearing them, came to be. The DAM’s version includes additional costumes (including some from Star Wars: The Force Awakens) and more than 100 objects previously not on view. We asked DAM interpretive specialist Stefania Van Dyke, who helped bring this exhibit to Denver, to share some insider secrets. (Full disclosure: She’s married to a 5280 editor.) Here, four behind-the-scenes tidbits so you can get the most out of your visit. 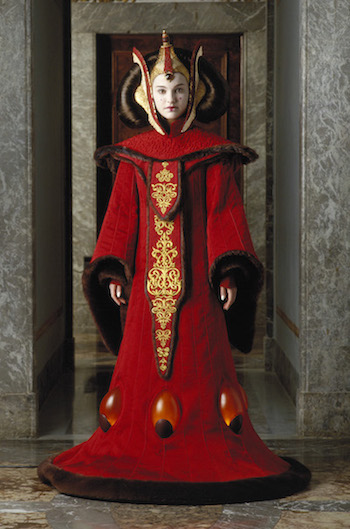 The DAM and Star Wars have a previous connection. When Van Dyke and her team visited Skywalker Ranch, they were searching through files from the concept artists. In a pile of papers that inspired the look of Naboo, Van Dyke discovered a xerox of Thomas Cole’s “Dream of Arcadia“—a painting in the DAM’s collection and currently on display in the galleries.

There are costumes that only people involved in the movies have seen before—because they never made it onto the big screen. For example, a striking ensemble known as the peacock and brown gown. Natalie Portman wore it while filming Star Wars: Episode III—Revenge of the Sith, but the scene was cut. Not only is the gown and its associated headdress on display at the DAM, but auxiliary materials such as fabric samples and the headdress mold are shown with it in the costume shop to give visitors a more complete understanding of how a 2-D design comes to life. “[It shows] all the work that goes into a costume,” Van Dyke says. “And then it might be cut from the film and never see the light of the day.”

C-3PO wasn’t a real robot! You knew that already? We figured. But you can get a peek at how Lucas and his team made that costume—and others—so believable. The DAM exhibit includes a deconstructed C-3PO, revealing the onesie—fake wires on the belly included—the actor wore underneath to make it, as Van Dyke says, a “wearable, movable costume and still make it look like a robot.”

There are five Easter eggs. No, not colored eggs—these are Star Wars references hidden throughout the exhibit. A few hints: In the 1970s and ’80s, puppets were used since CGI didn’t exist. Lucas was so focused on the details that tiny costumes were made for the puppets. One of those is concealed within the exhibit. Some of the others are numbers or symbols that only true Star Wars fans will recognize, while others are located underneath or behind objects.

Make it a staycation: A number of Denver hotels are offering special Star Wars packages, some of which include two VIP tickets to the exhibition. Check out the list of participating venues here.

For a few months at least, the Star Wars galaxy won’t be quite so far, far away.

If You Go: Tickets are $24 for adults, $5 for kids age 6 to 18, and free for kids 5 and younger; members get discounted pricing. A kid-specific audio tour (in English and Spanish) was also developed to help structure this massive exhibit for young ones who might otherwise get overwhelmed.