Few projects capture the essence of Denver’s growing visual arts scene more accurately than Forrest J. Morrison’s murals at the The Curtis Hotel. As Morrison sits on an overturned bucket tucked in the elevator bank at the back of the hotel’s lobby, you might not notice him or his art right away. But if you know where to look—or if you stumble upon the art by happenstance—it’s hard to avoid taking a peek.

Morrison, a Denver-based painter and board member of the Art District on Santa Fe, has made the Curtis his new artistic home for the coming months as he paints five of the hotel’s elevator lobbies based on imagery from historic art pieces. Although the Curtis has shut down its elevators at points to aid the process, much of Morrison’s work—aided by assistant and fellow artist Michael W. Vacchiano—has come as the hotel’s guests pass in and out of the elevators throughout the day. “Part of the charm of this project versus being in studio is that you get so much direct interaction,” Morrison says.

Commissioned for the project by Denver-based Nine Dot Arts, Morrison is adding a touch of tongue-in-cheek flair to works by Rembrandt, Michelangelo, Hiedronymus Bosch, Francois Boucher and Edward Hopper. “Each one of the floors we’re kind of taking liberties with the artwork [to] make a kind of social commentary, using the lens of imagery that most people have probably already seen,” says Morrison, who began the project in late October with a three-dimensional representation of Edward Hopper’s “Nighthawks” on the lobby level. The piece includes a representation of Denver’s historic Gates Rubber Plant (pictured) in Hopper’s style and palette, and will feature painted scenes of the Curtis’ neighboring restaurant, The Corner Office, by the end of the year. 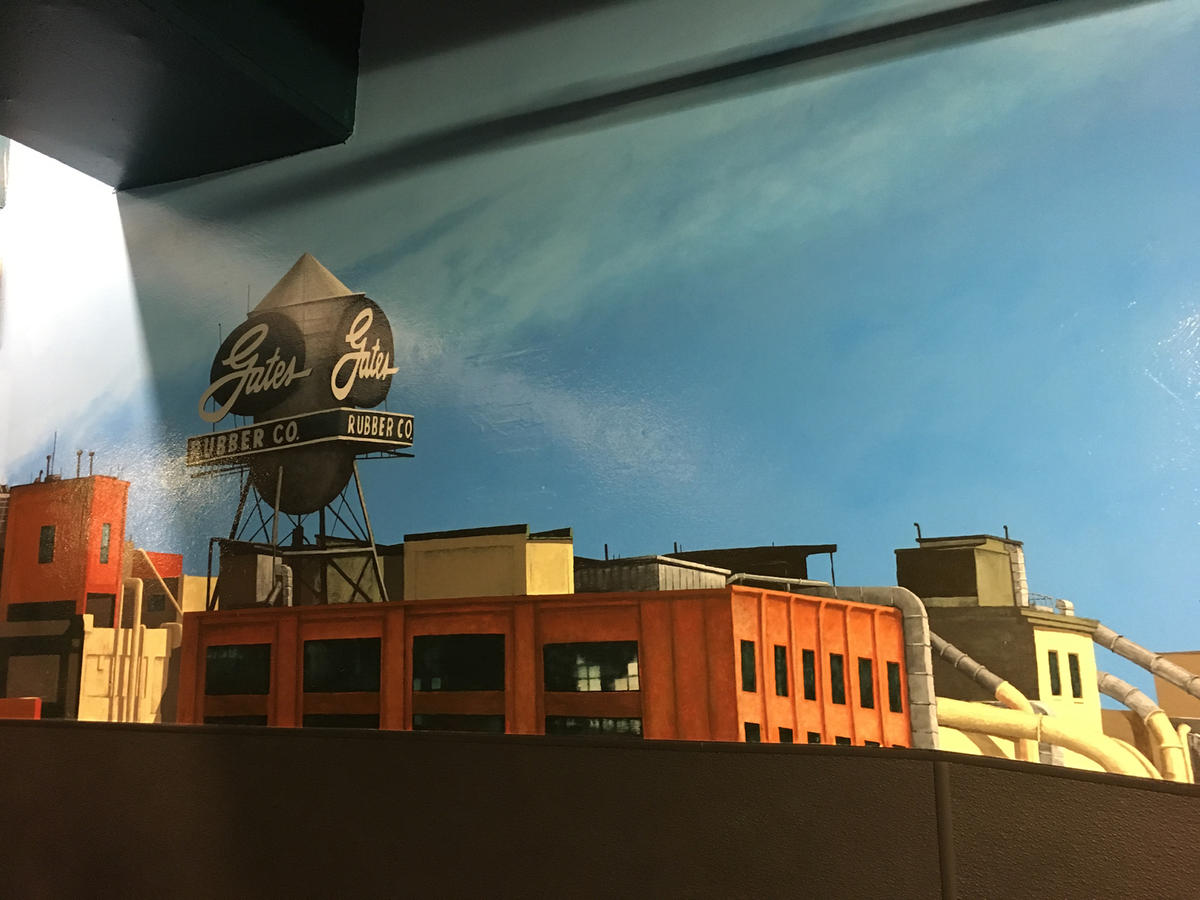 Following Nine Dot Arts’ request of painting scenes that correspond to each elevator level, the rest of the floors will take on the themes of heaven on the higher lobby levels and hell on the lower floors. The second-level lobby will display an alternative view of Michelangelo’s Sistine Chapel, and floor 1A will mix imagery of Boucher’s cherubs (“putti”) with painted selfie sticks, smartphones and headphones. On the lowest of the five levels, Morrison’s depiction of Rembrant’s “The Anatomy Lesson of Dr. Nicolaes Tulp” will recreate the famous work in the scene of a 70s kitsch basement, with figures in contemporary clothes. Morrison will paint himself in a wide-brimmed hat with a tattoo gun, giving tattoo stylings to a representation of his assistant, Vacchiano.

Once each floor is finished, it will be covered with a silicone, anti-graffiti coating that Morrison says will give the art a sense of permanence uncharacteristic for a mural. He estimates that painting each floor will take two to three weeks, giving the project a projected end date in the early months of 2017. And while Morrison is fine to remain in the back elevator lobbies of the art world for now, he hopes the Mile High City continues to grow in how it supports local artists like him. “I know a lot of people who really like to support their favorite breweries and restaurants…Buying a painting once a year instead of a few nights out at the bar goes a long way to help artists keep it going.”

(Read the 5280 guide to buying locally made, original art here)