Nobu Matsuhisa, one of the most successful chefs in modern history, oversees more than 30 restaurants around the globe, from Los Angeles to Cape Town, South Africa. Like fellow traveler Wolfgang Puck, he immigrated to the United States as a young chef, moved to Los Angeles in the 1970s, made a name for himself in Beverly Hills, and then set his sights on the world. Matsuhisa excited celebrities and pleased the rest of the rich with precisely calibrated, inventive, never-weird Japanese food. His expanding brand was a warm, cloned excellence: If you craved Matsuhisa’s famous miso black cod, you’d be able to find it wherever he opened his doors next.

Jet-setting Aspen was a logical choice for Matsuhisa, and Vail, too, but Cherry Creek strikes me as a riskier investment given the grandness of the restaurant, which opened in April. It will take a lot of high-ticket repeat traffic to keep this beautifully appointed ship—with its miles of polished cherry wood and dark stone accents, long cocktail bar, and splendid sushi bar—afloat. One thing I can say after three meals: The Denver crew is doing the boss proud. The best dishes matched or beat ones I first ate at red-hot Nobu and Nobu Next Door in Manhattan 10 years ago.

If you, like me, enjoy eating a fancy meal alone on occasion, then a Japanese “omakase” (chef’s choice) menu is one of life’s great, meditative pamperings. (It’s also a companionable choice for two, of course.) Matsuhisa’s seven-course Chef’s Daily Creation is $175, before drinks, so there’s that—$100 more than the omakase at Sushi Ronin, which I like very much. But this is the finest fish you’ll eat in the city.

I signaled my omakase intentions to the greeter and then to my server, both of whom exuded an exacting solicitude that suggested I was a long-known regular. With omakase there is no need to study the hefty menu, so I ordered a Matsutini—a satisfying, brisk, fizzy passion fruit gimlet with shochu and yuzu—and waited.

The sashimi course consisted of three shallow bowls, each with a slice of fish or seafood and fresh wasabi. The abalone was the best I’ve had, a “new style” preparation in which thin slices of the marine snail meat were brushed with garlic and lightly seared, then placed in a pool of olive oil and yuzu juice and garnished with sesame seeds, chive, and a matchstick of ginger. Horse mackerel, firm and delicious, was topped with jalapeño-yuzu soy. Albacore tuna came with truffled yuzu vinaigrette, powdered dry miso, and shavings of black truffles. 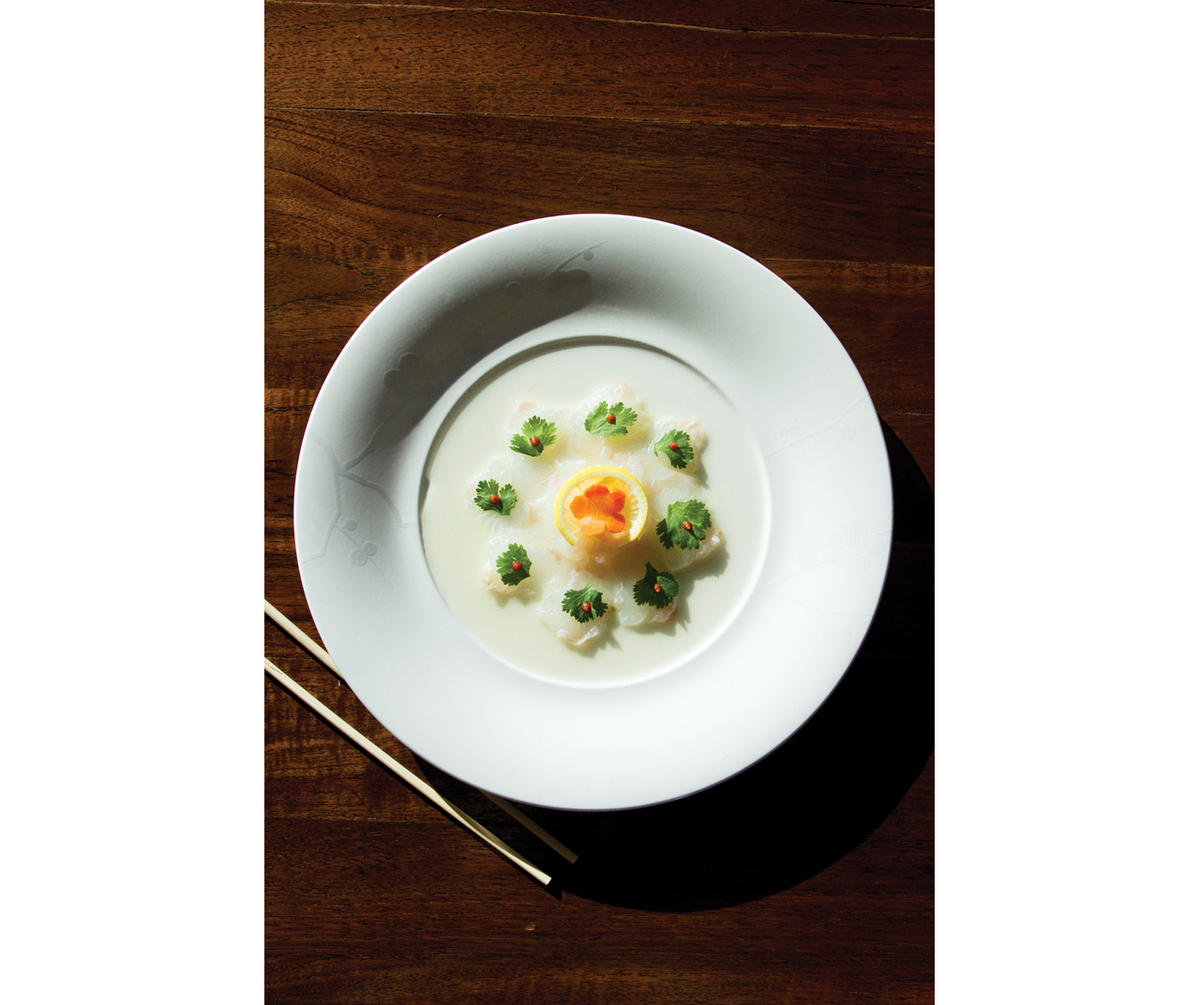 The beautiful nigiri sushi course featured gnome fish (“akamutsu”) with thin pickled onion; a little disk of seared scallop with salmon roe on a crispy tofu cracker; bluefin tuna just in from Boston (the server knew the provenance of everything); and mackerel. That last fish can be, for lack of a better word, fishy, but here it had an almost creamy texture and a delectable, mild sea flavor. There was also a marvelous strip of “tamago” (rolled omelet) with the Matsuhisa logo seared on its side. It had the texture of superfine sponge cake and the flavor of shrimp.

Consider, for example, the shiitake mushroom salad my wife and I ordered on another evening: a dome of tender greens dressed with a lemony, neutral-oil mixture that was so light as to be gossamer. The greens were ringed by little half-moons of dry-cooked, almost desiccated shiitake caps, and the mushrooms had an intense, caramellike woodsy flavor and appealing chew. It was exquisite. Another salad, with crab and endive and bits of puffed buckwheat, came with a dressing that seemed to have floated through a room of toasting garlic.

Matsuhisa’s menu can also be playful, as with an appetizer of fried cubes of rice. They arrive speared on toothpicks in a little wooden sake box. You top these morsels with a creamy mixture of chopped raw fish and dip the bites in a tangy sauce. The rice cubes, not much bigger than dice, were dark and crunchy outside and sticky within—which is no easy feat.

That dish is simply called Spicy Tuna, Crispy Rice, which highlights a challenge of the Matsuhisa menu: In this era of restaurant verbosity, the dozens of offerings are thinly, sometimes cryptically, described. I advise quizzing the servers, every one of whom seems to be well-schooled. Detail the textures and flavors you like. Take your time and plan the cadence of the meal over a cocktail. 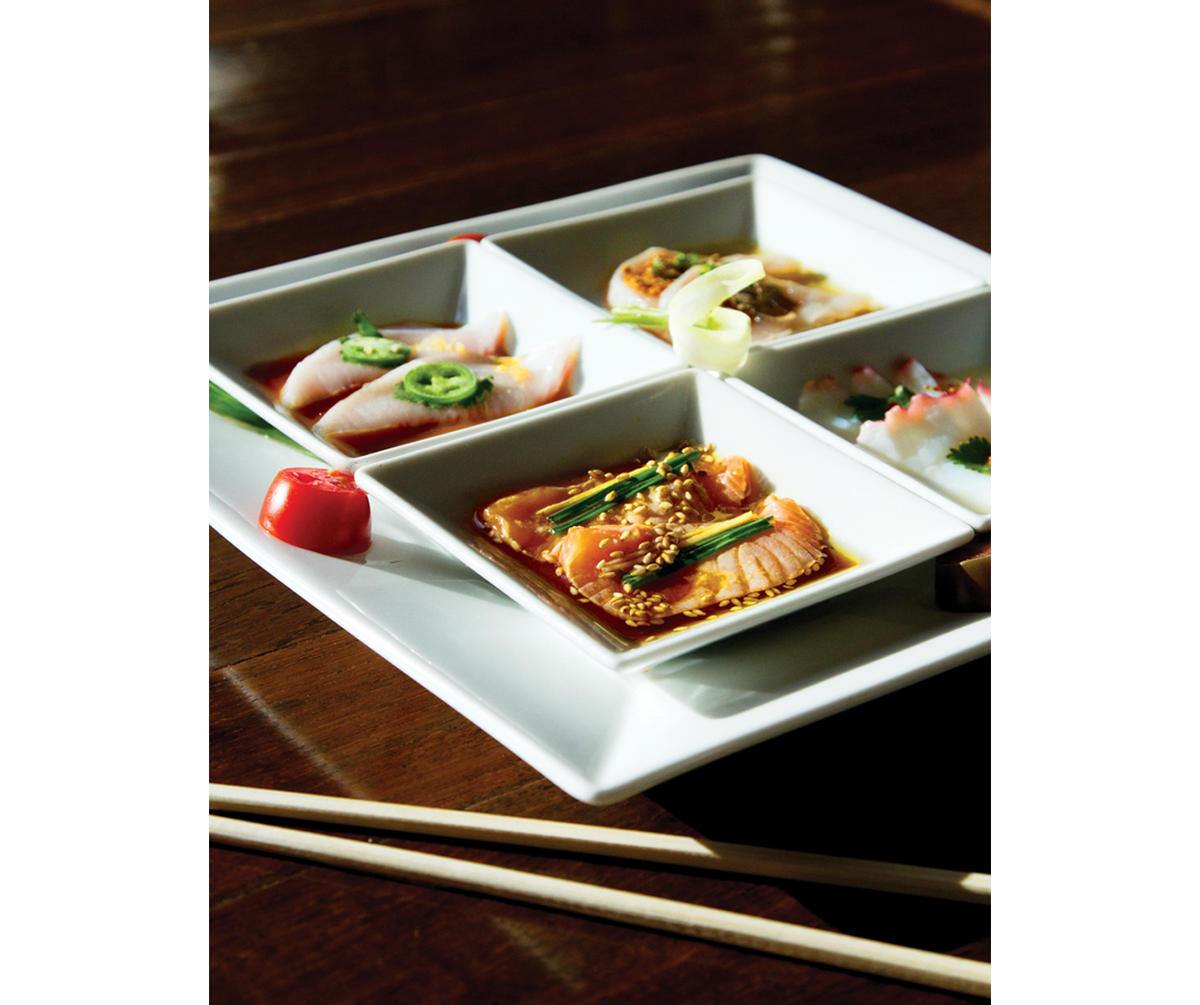 Back to my $175 solo meditation: After an exquisite piece of cooked sea bass, I finally had the chance to contemplate the fat-bomb strangeness of top-grade wagyu beef from Miyazaki, Japan. A flat of black stone arrived bearing four slices of the precious meat along with oyster mushrooms, a little gratin of mountain potatoes, seared leeks, and a smoky leek purée. The meat was so unctuous and tender that but for the pink color, it might have been pure fat cut from roast beef. This was intended to be a showstopper, but I was more startled than seduced by the mouthfeel of bovine obesity. I will offend wagyu worshippers by saying this, but a funky dry-aged New York strip would have suited the dish’s sweet-sour flavors better.

I ordered a glass of sake. Matsuhisa has an impressive wine list, but with an omakase meal it is right to drink fine sake, served here in beautiful little egg-shaped glasses. The house Nobu label Jun Mai daiginjo is a balanced bargain at $15. If you’re feeling flush, compare it to the TK40 daiginjo, a bit lighter and more complex, for $20, or run the table with glasses priced at $30, $45, and even $70 (and please report back to me how they are).

My experiences at Matsuhisa were not without flaws. A dinner for two involved some ball-dropping between two servers that resulted in a couple of botched orders. A dessert with the omakase menu was a misfire: corn ice cream on corn pound cake that had the texture of a deep-sea sedimentary layer. The restaurant itself is both spectacular and warm, but the two-person tables seem rather crammed together given the scale of the room and the prices one pays. That’s about the extent of my complaints, though.

I did eat lunch—a diverse $45 bento box big enough for two—at Matsuhisa, with another glass of sake, but the magic happens at dinner, when it becomes clear that one of the world’s most successful chefs has cloned his excellence right here in Denver.