“She could make anything out of nothing,” reminisces Joshua Pollack, the owner of Rosenberg’s Bagels & Delicatessen, while speaking of his grandmother’s cooking during a recent chat. That statement turned out to be a poignant summation of the topic at hand: matzo balls and hushpuppies alike symbolize cuisines that developed amid unimaginable hardship. In fact, their parallel roots in deprivation and displacement may be all the more reason why Jewish and African-American cookery are now synonymous with comfort, heart, and soul.

In the Old Testament, matzo is literally the stuff of exile. The Israelites, led by Moses, fled Egypt with what little they had, including the unleavened dough that became their so-called “bread of affliction.” Fast forward a few thousand years and the cracker-like flatbread remains a token of impoverishment. Even in its most beloved form—the dumpling known as the matzo ball (or knaidlach in Yiddish)—it’s typically served in soup, which, Pollack points out, is a means of making the best of slim pickings in any culture.

Soup is also an expression of TLC. Pollack’s decision to add matzo ball soup to Rosenberg’s menu presented “a big challenge” precisely because of the nostalgia it inspired in his team. “Everyone thinks that his or her grandmother makes the best.” The debate over the proper method for making this beloved dish rages on: should the balls be “large or small, fluffy or dense?” Should you add seltzer or baking powder to the dough? Should the matzo balls be showcased in a simple consommé or something more elaborate? That all depends on with what, and with whom, you grew up.

Rosenberg’s final result, Pollack says, represents “the melding of many bubbes’ (grandmother’s) recipes.” The matzo balls themselves are “on the fluffier side” and the soup starts with locally sourced whole chickens. There are onions, celery, and carrots—“the cheap vegetables that are the basis of Jewish cooking”—as well as herbs galore, especially dill. There’s schmaltz (chicken fat), “the other basis of Jewish cooking.” And there’s the garnish of fried chicken skin, which may sound like a modern flourish but actually evokes gribenes, a traditional mixture of cracklings and fried onions. 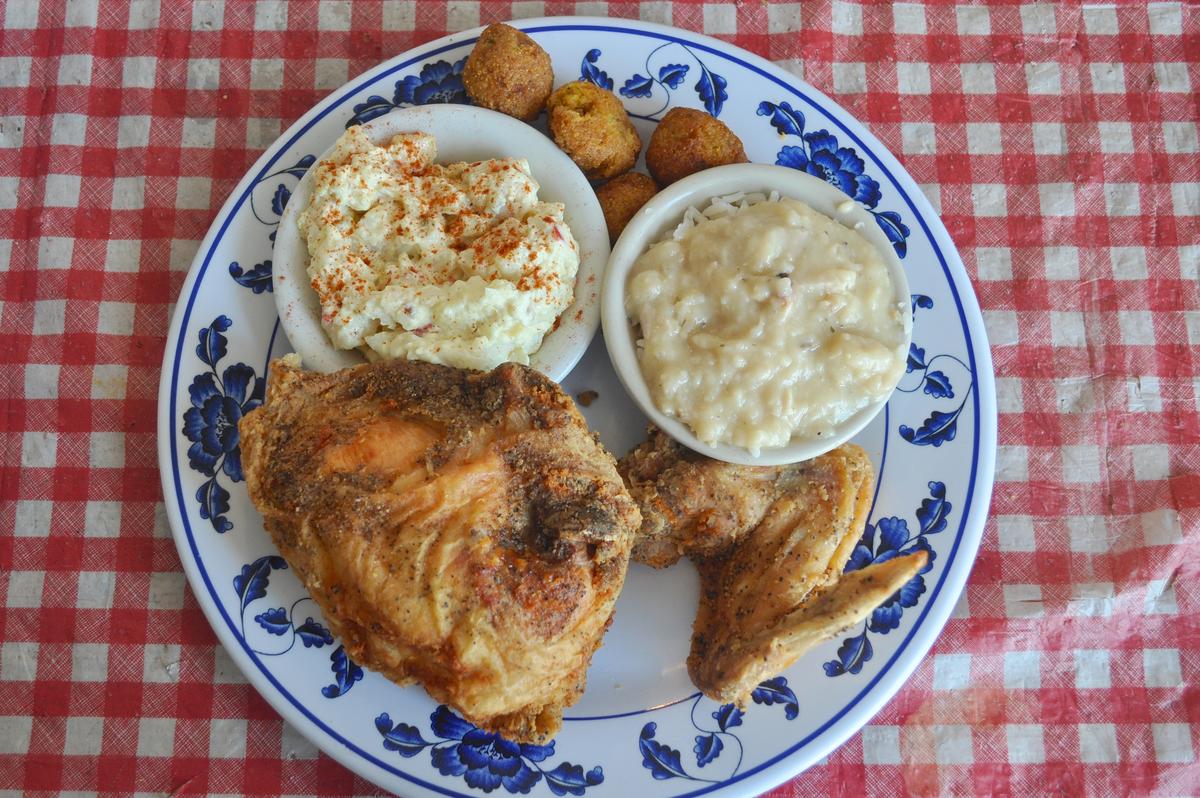 No CoraFaye’s spread would be complete without hushpuppies (at the top of the plate). —Photo by Ruth Tobias

As for the Southern staple that is the hushpuppy, there’s no concrete proof that nuggets of fried cornmeal batter were an African-American invention. After all, Native Americans were grinding corn into meal for baking and frying long before anyone else arrived, and “cornbread was the staff of life in America until…the middle of the nineteenth century” for both natives and settlers alike, according to the Oxford Encyclopedia of Food and Drink in America.

But we do know that cornmeal was central to the African-American diet. Consider the sheer variety of products to be found at the field slave’s table, including “johnnycake, cornmeal dumplings, cornmeal mush, hoecakes, corn dodgers, corn pone, [and] cornbread,” per Oxford. And African-Americans in turn “played such a prominent role as the cook-practitioners of the South…[that] it is reasonable to view the boundaries between soul food and so-called Southern food as extremely blurred.”

But reason rarely trumps racism, and so the influence of black cooks on the region’s cuisine was long “whitewashed” by mainstream historians who couldn’t fathom its value or bother to chronicle it, as Denver-based author Adrian Miller explains in his James Beard Award–winning book Soul Food: The Surprising Story of an American Cuisine, One Plate at a Time. As for hushpuppies, “I don’t see any mention of them before the Civil War,” he says. Similar dishes existed throughout the South, however, including South Carolina’s “red horse bread” that (to quote Miller’s book) was “named for the Red Horse fish with which it was often paired.”

Which brings us to a theory of Miller’s that rings true: “In West Africa, there’s a tradition of pairing fish with small fried balls of black-eyed pea meal called akara,” he told me. “So my guess is that hushpuppies”—which are commonly served at Southern fish fries to this day—“are an analog to that.” And while some scholars dismiss the hushpuppies’ origin story, in which field hands dining around the campfire would quiet their hungry dogs by throwing them pieces of fried cornmeal batter, Miller points out that, true or not, “the earliest versions of that myth apply to black people.”

It all reminds me of my favorite line in The Brothers Karamazov: “Isn’t it strange, Kolya. Such sorrow and then pancakes afterward.”

Try It: Doesn’t matter who you are, where, or with whom you grew up—Rosenberg’s traditional matzo ball soup tastes like home (725 E. 26th Ave., 720-440-9880). I also love chef Daniel Asher’s update at River and Woods (2328 Pearl St., Boulder, 303-993-6301), which is based on a family recipe obtained through his community-sourcing project (read more about that here). He makes his matzo balls with duck fat, and then adds them to ramen broth topped with a duck egg.