Most of us associate fruitcake with those glow-in-the-dark bricks that double as the butt of Yuletide jokes. But think again. Like it or not, fruitcake actually belongs to a proud European family of sweet treats ranging from Spain’s flourless, fig-based “pan de higo” to the date-filled sticky toffee pudding of England. Two of fruitcake’s closest relatives are especially beloved this time of year: Italian panettone and German stollen. The first hails from Milan and the latter is a culinary symbol of Dresden, but you’ll find fine examples of both in Denver’s western suburbs, of all places.

The owner of Wheat Ridge fixture Dolce Sicilia Italian Bakery, Franco Spatola, isn’t from Milan; he’s a native of small-town Campobello, not far from Marsala in Sicily. “But everyone has adopted panettone,” he says. “I grew up in a family that owned bakeries and restaurants, so at a young age I was exposed to making it during the holidays.”

Here in the States, you’re most likely to encounter packaged, imported versions of the eggy, buttery yeast bread, shaped like a tall muffin and studded with raisins or currants and candied citrus peel. There’s a good reason that most local bakeries, even Italian ones, don’t make the pastry themselves: Not only is the recipe “very time-consuming and labor-intensive,” according to Spatola, but the result has such a long shelf-life that Italian companies may start production for the winter season as early as June. For him, however, nothing can trump the nostalgia of baking panettone from scratch: “I like to stick to tradition. These are my memories of childhood.” And while Italian markets may stock all sorts of flavor variants like tiramisù and pistachio, Spatola prefers the simplicity of the Milanese original, limiting his alternative flavors to chocolate. 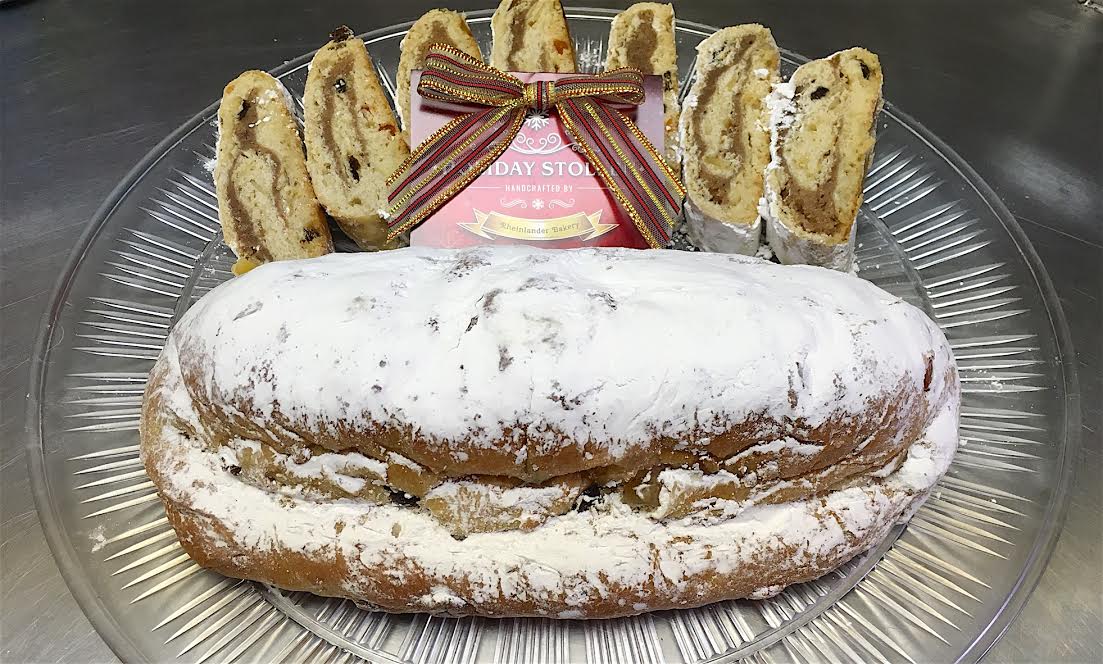 The stollen at Arvada’s Rheinlander Bakery also has deep roots in family history. As Maro Dimmer tells it, her father-in-law, Jacob, came to America from the German village of Olmscheid in the late 1950s “and brought the art of baking with him,” founding Rheinlander in 1963. To this day, the Dimmers base their rich, sweet stollen on his recipe, which typically contains the same ingredients as panettone, along with nuts and sometimes booze. Once baked, the loaves are brushed with butter (“Ours get three brushings,” Maro promises) and then covered in powdered sugar. As for their oval shape, it’s supposed “to represent the Christ Child in swaddling clothes, whence the name Christstollen,” according to the Oxford Companion to Food.

In addition to a basic version, the Dimmers offer three variations: one is flavored with rum; another features almonds and not-so-traditional cranberries; and then there’s the one stuffed with marzipan (or almond paste, which Maro calls “Germany’s national candy”), per Dresden custom. It’s this marzipan version that boasts special protected geographical indication, or PGI, status in Germany. PGI is one of a few classification systems designed to preserve the integrity of European food and beverage products deemed culturally significant—other examples include mortadella and Cornish pasties. Shockingly, panettone has yet to receive the same formal recognition. But given time, perhaps, all fruitcakes will get the respect they’re due.