At first, some thought the gunshots were just noise from the construction next door. It was June 28, 2016 in The Alliance Center, a coworking space on Wynkoop Street for organizations dedicated to various aspects of sustainability. A little before 3 p.m. on that Tuesday, a group of about 10 was holding its weekly staff meeting in a fifth-floor conference room when a colleague burst in. “We assumed we’d run over our meeting time,” says Christi Turner, communications manager for The Alliance for Sustainable Colorado, the nonprofit that owns and runs the building. “But she said, ‘The building is surrounded by police. You need to get out of here.’ Then she left.”

The group scattered throughout the fifth floor. The Alliance Center completed a multimillion-dollar renovation in 2014, transforming what once resembled a dank school library into a sleek, high-tech—and of course, environmentally green—modern workspace. Those upgrades included the addition of high-definition security cameras that would soon become a valuable investigative tool. But it also presented a problem: The futuristic glass-walled offices offered little protection from whoever might be coming up the stairs.

Led by Jason Page, Sustainable Colorado’s acting executive director (he’s now its COO), the group and others on the fifth floor scrambled to find cover behind pieces of furniture. They waited, some crying, some silent, some making gallows-humor jokes, as they peered anxiously at each other across the floor. Within minutes, some of their phones started ringing. It was CNN, MSNBC, and local media, who’d been monitoring police scanners and were now dialing the cell phones of Alliance Center staffers still inside the building, trying to figure out if they were becoming the latest victims in the uniquely American epidemic of mass shootings.

Neither Page, Turner, nor anyone else in the building knew what was happening. Turner was hiding in a corner near an outside window, and she worked up the nerve to stand up and steal a glance outside. On the street below she saw a squadron of SWAT team officers in riot gear, guns trained on the building’s front door. “I thought to myself that these could be the last moments of my life,” Turner says, “and I don’t even know half the people in this room.” 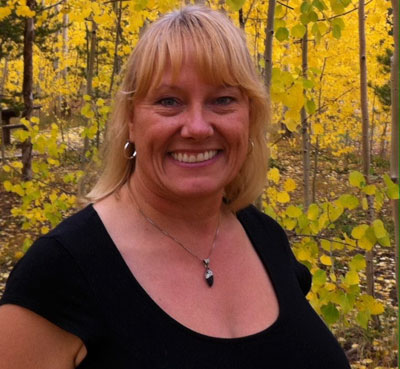 On June 28, 58-year-old Mickey Russell entered The Alliance Center, walked up to the second-floor office of his estranged wife, Cara (pictured, right), and shot her before killing himself. Cara Russell died from her injuries about 12 hours later. She was 52 years old, a former mayor of Buena Vista, and had recently relocated to Denver to take on the role of executive director for the Colorado Association for Recycling, setting up shop in The Alliance Center.

To much of the outside world, Cara’s death was merely the latest incident of domestic violence between a troubled couple. Once the national media realized the tragedy at The Alliance Center wasn’t a mass shooting at a politically active organization—a possibility enhanced by the fact that Hillary Clinton happened to be speaking nearby that day—they moved on to other topics. “It was pretty surreal how quickly the spotlight shined on us, then how quickly it swung away once they figured out we didn’t bleed enough for the national news to cover it,” Page says. That evening and the next morning, most local news outlets led not with the story of the shooting, but with the Broncos’ signing of Von Miller’s contract extension.

Back at The Alliance Center, Page’s work was only beginning. Once SWAT teams cleared the building floor by floor, Page and Alliance Center manager Chris Bowyer surveyed the eerie scene with police: Laptops left open mid-email, unfinished meals from a late-lunch meeting strewn across conference tables, the lingering smell of burnt toast left behind by a fleeing barista in the lobby coffee shop, phones and purses and backpacks hastily forgotten amid the chaos. They surveyed the security footage, which had captured some audio but no video of the incident. Because of that and the uncompleted investigation, it wasn’t until later that evening that Page knew for sure that the victim was Cara.

Given his role at the organization and being the self-described “old man in the building,” Page knew the task of shepherding his colleagues through this nightmare fell largely to him. That evening he sent the first of countless emails to The Alliance Center staff, trying to reassure them about the unconscionable act and letting them know that, individually, they would be free to decide when to return to work. He also began setting up resources that would help the staff at The Alliance Center community, which has about 200 people spread across 50 different organizations, mentally process the tragedy.

“He was very respectful of making sure everyone was filled in and emotionally fine,” says Jamie Perkins, program manager at Transit Alliance, a nonprofit focused on transportation issues that resides in the building. “But he also made sure we had the resources to do our work, because everyone who works here is trying to achieve a higher purpose.” Even though The Alliance Center leaders had encouraged their people to take whatever time they needed, virtually everyone was back to work within two days.

As The Alliance Center community began healing from the trauma, stories of angels and heroes emerged from the fateful day. A young intern had confronted the gunman in a stairwell, pleading with him not to do anything before the shooter pushed past him. Another tenant and his printer repairman (an ex-Marine) who happened to be onsite assured everyone around them as they hid and waited: “You’ll be OK; he has to get past us.”

But Cara herself was the biggest protector of all. When she saw her ex-husband, she shouted that he had a gun and then confronted him directly, allowing others to escape. “She was really strong,” Page says. “Her courage and actions helped others escape.” Witnesses later reported how Cara had defiantly confronted her ex, telling him, “You aren’t going to hurt me.”

Because Cara had been at the organization for such a brief period, she was still relatively unknown around The Alliance Center. “We’re not just another office building where you don’t know people you don’t work with,” Page says. “One of the hardest parts about this was that Cara was so new we hadn’t gotten time to really know her yet, so that felt like an organizational failure to us.”

He set about correcting that, staying in close contact with Cara’s family and employer to figure out the best ways to honor and remember her. Page led a public memorial service outside the building in July, but the incident is still raw, and The Alliance Center’s leaders plan to work with Cara’s family in the coming months to figure out how to permanently pay tribute to her. There have been thoughts of etching one of her quotes onto a wall, but they ruled out erecting a simple plaque because Page and his colleagues deemed it “too traumatizing for some people because it brings it all back. [The recovery has been] this weird mix of not wanting to forget, a reminder of the fragility of life, and of [figuring out] what type of life you want to lead.”

As the organization moves deliberately in some ways, it’s become far more intentional in others. “After a tragedy like that you feel so helpless and purposeless, and it was my job to give [my colleagues] ways to feel OK about coming back,” Page says. He worked closely with Scott Snow, director of the Denver Police Department’s victims assistance unit, to set up counseling and other programs for Alliance Center tenants. Page and others also met with a group of former Columbine High School teachers who survived the 1999 massacre and now help survivors of other similar incidents.

“I just started by handling basic life questions, like how to get someone’s purse or cell phone back to them, and from there I started offering daily updates about counselors and what to do next, a ‘whatever you need’ kind of thing,” Page says. “We looked for ways to get people involved with the emotional recovery and try to gently urge the more reluctant ones not to be afraid to return, because we’d always be here with open arms.”

Today Page says he’s still sorting through the past six months, a period he says has been a bit of a “time warp”. In addition to supporting his colleagues, he’s trying to spend more time at home. Rather than stay late at the office, he’s more likely to share dinner and bedtime rituals with his wife, their three-year-old daughter, and infant son, and then finish his work after they’re asleep. “I don’t want to miss out on time with my family and on the things that aren’t guaranteed,” he says. “The Columbine teachers have talked a lot about what a long process [trauma recovery] is. It might be years before we fully know how deeply this has affected us, and our staff has a pact to keep eyes on each other.”

In a sad irony, the younger Alliance Center staffers are probably better equipped to bounce back, because most of them have experienced the increasingly common mass shooting-response training in college or at other jobs. The Transit Alliance’s Perkins was in a lockdown situation during an elementary school shooting, another tenant was at Virginia Tech University during the 2007 incident that took 33 lives, and Page has personal connections to Columbine, to the 2006 Platte Canyon shooting, and to the 2012 Aurora Theater massacre. “Once police determined that this was ‘just’ a case of domestic violence, it gave people some relief that it wasn’t a senseless random act,” Page says. “But it was still cold-blooded murder, and people here are still wrestling with the proper way to feel about that.”

The rank-and-file employees say The Alliance Center—whose entire mission revolves around trying to make the world a better, safer place—has already become more kind and welcoming, if also more vigilant. “Now if I’m in the coffee line [in the building’s lobby] next to someone I don’t know, I’ll just introduce myself,” Turner says. “A lot of these small, individual organizations could’ve vacated the building after this; instead we united faster.” Perkins says she’s much quicker to greet an unfamiliar face, which has made her work more productive because she’s ended up forming professional alliances that she didn’t realize were available.

Many in The Alliance Center give Page credit for creating that supportive environment through his regular, detailed, and enduringly warm all-staff emails. “Those became a touch point for me and everyone else,” says Carina Gaz, community engagement manager at BikeDenver. “Jason really created the opportunity to ask questions and was always very transparent, open, and connected. Today I feel like I know and work better with everyone and see more overall collaboration.” Whether these emails are merely informational updates or something more emotionally charged, since June 28, Page has ended every one the same way:

Jason Page has been selected for 5280’s 2016 Do-Gooder Award, an honor that recognizes individuals and organizations that are working to make the world a better place. Several Alliance Center employees nominated Page for his grace and resilience in the face of tragedy. Stay tuned for next year’s Do-Gooder Award nominations, launching in November 2017. Read about our 2015 Do-Gooder Award winner here.