Even though the Broncos won’t be in the Super Bowl this year (we’re still celebrating the 2016 win anyway), we can take comfort in knowing one of our very own was drafted for the starting line up of Animal Planet’s annual Puppy Bowl—the second most-watched program on Super Bowl Sunday, following the big game.

The Mile High puppy, Squirt, will represent our city with his dashing good looks and playful personality, alongside 78 puppies from 34 rescues across the U.S. The Dashund/Rat Terrier Mix is 12 weeks old and weighs in at a whopping 3 pounds.

Denver Dumb Friends League, the largest community-based animal welfare organization in the Front Range, is participating in the event for the second year. “The puppy bowl is more than entertainment,” says Joan Thielen, communications specialist for DDFL. “It encourages adoption, a message engrained in every aspect of the event.” 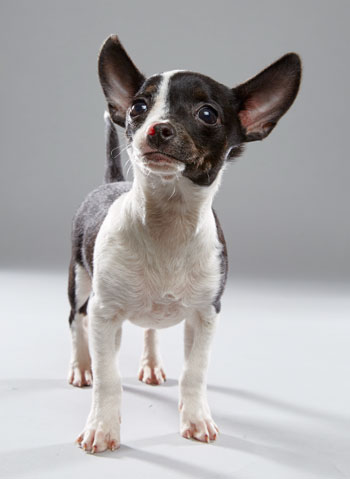 DDFL had four candidates for the event this year, but Squirt, with his petite size and passion for fetching, was the only one that caught the eyes of the Puppy Bowl XIII recruiters (what a job!).

Squirt’s debut comes after weeks of training in a DDFL foster home. He was escorted by Thielen to travel to the Big Apple to film the show in early January. At the time, the wide-eyed fur baby was available for adoption, but it’s no surprise Squirt quickly charmed his way into a forever home with his irresistible snuggles. (Don’t fret if you had your heart set on him: Denver Dumb Friends League has many more adoptable animals to choose from.)

You can follow Squirt’s journey to Puppy Bowl fame on Instagram and Twitter, and don’t forget to tune in on February 5 to root for this little guy and Team Ruff.

Tune in: The Puppy Bowl tailgate starts at 12 p.m. local time and the game kicks off at 1 p.m. on Animal Planet. Fortunately, in case you miss an aww-worthy close up of the iconic water bowl cam during, say, a nacho refill, the Puppy Bowl XIII will repeat all day and night for 10 straight hours (that’s right—10 pure hours of puppy goodness). Don’t think they’ve forgotten cat lovers: During the Kitty Halftime Show, the sophisticated felines will take center stage.