Why we love it: The single longest run on the mountain, Riva Ridge is one of Vail’s most iconic ski trails

One of the longest ski runs you’ll ever come across, Vail Mountain’s Riva Ridge drops an impressive 3,000 vertical feet over four miles. Named in honor of a major World War II battle waged by members of the 10th Mountain Division, a number of whom helped found Vail, the iconic, expert-level route is steeped in history and offers breathtaking views of the Gore Range from the mountain crest all the way down to the base.

To reach the ridge, take the Northwoods Express or Mountaintop Express lift up and start down the green Swingsville run. Where it veers left, stay straight, following the signs for Riva Ridge. After branching off from Swingsville, Riva Ridge plunges down alternating black and blue slopes that are usually covered with moguls. The steepest and most difficult pitch, jokingly called the Tourist Trap, is about mid-way down the mountain and is known for its extra-large but wonderfully rhythmic bumps.

To avoid icy patches, the route is best skied in mid-to-late season in good snow. A shorter version, which still includes the Tourist Trap, can also be accessed from Gondola One. Whatever route you take, make sure you’re prepared—you’re in for a bumpy, joyful ride. 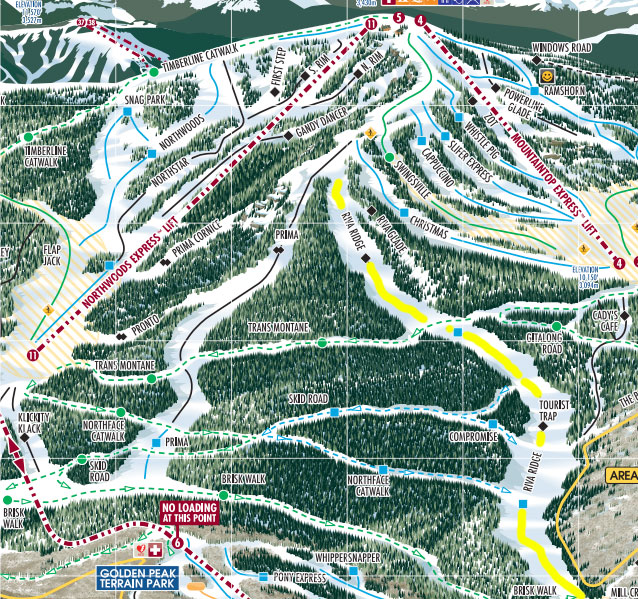 The Riva Ridge run is highlighted in yellow. Map courtesy of Vail Resorts