It wasn’t the biggest home on the leafy street in Hilltop, nor the flashiest. But as soon as Ashley Swapp and her husband, Tom, saw this 1932 Tudor, they were smitten. The 2,400-square-foot house oozed enough historic character to overshadow its age-related shortcomings (dark interior and awkward, misused space), and they knew it was just a matter of finding the right designer to help make it their own. “We always wanted to live in an older neighborhood in an older home with charm,” Swapp says.

A floral designer with a trained eye and the owner of Denver’s Park Floral Design, Swapp is no stranger to style—something she has in common with her college friend, Shea McGee, co-owner of Insta-darling design firm Studio McGee, which is based in Salt Lake City. Despite the distance, Swapp brought on Studio McGee’s design team for the renovation and signed off on an aesthetic they call “clean eclectic”—a mix of traditional, modern, and rustic styles that preserves classic elements while creating a fresh, energized take on the Tudor. It’s historic but current. 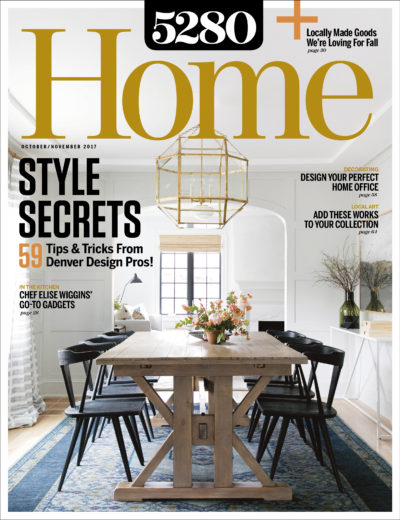 Shea has always had such a distinct style,” Swapp says. “I pretty much said, ‘Just have fun.’” And wow, did that approach pay off.

To avid followers of design feeds on social media, photos of Swapp’s renovated kitchen—with its green cabinets and black-and-white cement floor tile—and her classic-yet-modern living room probably look familiar: They’ve been liked and linked a whole lot. While it’s hard to pinpoint what’s in the special sauce that makes this home so darn pin-able, it probably has something to do with the design-magic trifecta: the right house, the right homeowner, and the right designer. “This was the last house we looked at, with these huge trees everywhere, and as we drove up the street, we just fell in love,” Swapp says of her first glimpse of the Tudor. And after Studio McGee’s team swooped in to reimagine and polish up every room, we can’t help but like it, too.