There are plenty of fall traditions, but yesterday marked an important one for anyone with school-age kids: The release of the Denver Public Schools’ annual School Performance Framework (SPF) ratings.

The SPF is meant to be, as the DPS website states, “a report card for schools,” based on a matrix of factors including student growth, test scores, family satisfaction, and a variety of others. Schools are placed on a continuum from accredited on probation (red) to distinguished (blue).

For new schools, SPF ratings are critical for spreading the word and boosting enrollment, something I wrote about in September’s “Testing Ground,” which chronicled the first two years at Roots Elementary, a DPS charter school in Northeast Park Hill. The young school, which aims to provide innovative and individualized learning, was listed red after it’s first year. The reasons for the rating, I wrote in the piece, were complex:

“The SPF is typically based on an average of two years of data, and as a new school, Roots only had one. In addition, most schools can pull academic testing data from several grade levels, but Roots had just two grades last year—and kindergartners’ results weren’t included. That left a pool of 19 kids on one reading test (the statistical cutoff point for a small data pool is 16 students) to sway the SPF matrix. While he wouldn’t mind if the SPF ranking had a footnote to explain the small sample size, [Roots founder Jon] Hanover won’t take the easy way out. ‘I think it is better to have accountability for schools sooner rather than later,’ Hanover says. ‘There is nothing more important than how we are educating our kids. We should have some way of measuring performance and holding schools accountable.’ ”

Yesterday, the school announced that it earned a yellow rating. The growth is thanks, in large part, to achieving green or blue ratings on the SPF’s individual academic growth metrics, which helped pull the school’s two-year average up two levels. (Of note, Roots earned a blue rating in early literacy catch-up.) 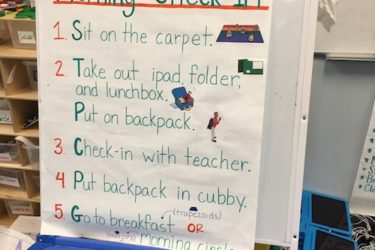 I caught up with Hanover to hear his reaction to the result. “We’re very proud of our kids and encouraged by the results,” Hanover says. “I think that it shows the dedication and excellence of our teachers and how much work they are putting in.” Hanover is hopeful that as the school grows, the rating will continue to rise, but acknowledges that, “we have a lot more work to do.” He wants to celebrate the achievement, but not lose focus on what the students need to keep excelling.

His words echo a phrase—“Grow Your Brain”—that I heard often while reporting at Roots. I asked Hanover why and he cited research that encourages treating intelligence as something that is malleable, instead of a fixed thing. The idea has taken hold at Roots. In class, students often boast about their “big brains” or “building my brain.” Teachers are less likely to talk about a kid’s score on an assignment than about the growth he or she made from the previous one. “Your brain is like a muscle,” Hanover explains. “The more you work it out the more it will grow.”

So far, it looks like the strategy is working.

BONUS: This Saturday, some 200 volunteers will erect a playground on the south side of Roots Elementary in just one day. The area, which is a joint effort with insurance provider Travelers and nonprofit KaBOOM!, will be accessible to the entire neighborhood. A ribbon-cutting ceremony will be held at 2:30 p.m.