Not so long ago, most attorneys were jacks-of-all-trades: One lawyer could write the contracts for your business, handle your estate, and defend you against criminal charges. That’s no longer the case. The law has been split into dozens of categories—ranging from criminal law to bankruptcy to water law to civil rights—each of which demands a specialist’s knowledge. Navigating this complicated legal world can be overwhelming, which is why we’ve put together Denver’s Top Lawyers 2018, our fourth annual list of the best attorneys in the region. We invited lawyers in the seven-county metro area to vote for the contemporaries they respect most in 50 legal specialties. Survey responses in hand, we then did weeks of reporting to get an on-the-ground perspective: Who are the best litigators? The finest contract writers? Who’s been quietly building a name for herself? Who’s been coasting on an outdated reputation? Based on those interviews and our survey results, we assembled the following list of the most skilled attorneys around. 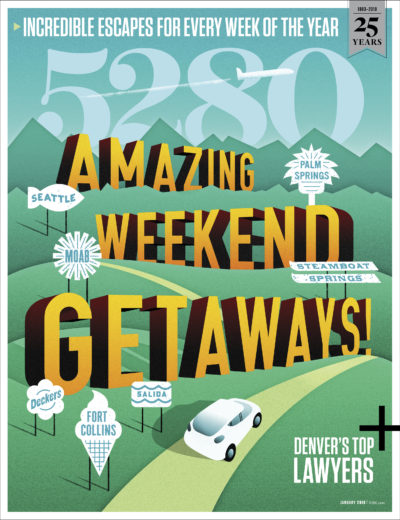 Which attorneys did you survey?
All licensed attorneys in the seven-county metro area were welcome to participate in our survey, which went live on 5280.com in May. We mailed postcards to more than 16,000 licensed attorneys actively registered with the Colorado Supreme Court’s Office of Attorney Regulation Counsel and reached out to local bar associations to make sure we received a strong response to the peer-reviewed ballot.

How did you ensure that big law firms didn’t stuff the ballot box?
Good question! In order to vote, each attorney had to register with his or her work email address and his or her Colorado attorney registration number. We monitored IP addresses to make sure one person wasn’t voting for everyone in a firm. We checked out any suspicious votes—and tossed them if necessary.

Were the results from the ballot the only data you used to create the list?
No. To supplement the online ballot results, we did what we do best: research. We made many, many phone calls, spent hours digging for standout cases, and generally did our due diligence on each name on the list.

How did you pick the specialties represented on the ballot?
We assembled this year’s list of 50 specialties based on input from the Colorado Bar Association,
local attorneys, and area law firms.

Did you check out each attorney?
Our research department independently verifies every lawyer’s pertinent information (name, phone number, office address, website, etc.). We take the added step of sending the list to the Colorado Supreme Court’s Office of Attorney Regulation Counsel to check for disciplinary and
licensing issues—meaning attorneys on the list are currently in good standing with the state.

Denver continues to be one of the leading cities for new business growth, according to the Kauffman Index, a group that measures entrepreneurship in metro areas across the country. As part of such development, startup businesses—including those in the booming tech scene and a bevy of new restaurants and breweries—have sprung up throughout the Mile High City. 5280 spoke with Moye White’s Dominick Sekich, who advises burgeoning startups, about how legal counsel can benefit emerging companies.

5280: How can you help entrepreneurs in the initial stages of business development?
Dominick Sekich: One of the first things we do is look at their good idea and confirm what sort of business structure is most useful. Sometimes the idea has the opportunity to protect itself through existing intellectual property (IP) laws, and we try to provide a container for the IP [a lawyer can help select the best business structure, ranging from a corporation to a sole proprietorship]. We are also concerned with the company’s competitive position and tax planning.

How do you protect intellectual property for different types of startups—for example, a restaurant versus a software company?
A fast-casual restaurant concept may find the IP they create can be protected without any more complex structuring than just an operating company. Software companies or high-tech device manufacturers may want to create a separate entity or holding company for the IP. It is all very advanced, but startups should be aware that there are myriad IP issues out there and be in regular contact with their lawyers and other trusted advisers.

What would you say to a startup that’s not considering any type of legal counsel?
It is quite common for startups to form an advisory board and not uncommon for those boards to be compensated with equity—or the promise of equity—in the company. It’s useful to have a lawyer who can take a more objective view: who may be interested and aligned with your success (and perhaps your other goals) but who is not driven to extract a timely return on investment.

How does your role evolve as these businesses become more successful?
At that point in the cycle—when they’ve reached a certain level of success—they will have
attracted more expertise by adding members to their management team. The reasons they reach out become less frequent but more complex. It could be a specific situation with an investor, or we might need to connect them with someone with more expertise, like, say, a patent lawyer. At some point the client needs to move on to another level of representation, and that is a sign that you have had some success with them.

Stay In Your Lane

Cycling is one of Coloradans’ preferred modes of transportation—especially as traffic has become an annoyance in the expanding Mile High City. Yet the latest report from the Governors Highway Safety Association noted that bicyclist deaths increased 12.2 percent nationwide from 2014 to 2015, the largest percentage increase of any roadway user group. Michael Burg, a 5280 Top Lawyer and trial attorney with Burg Simpson, spoke with us about following the rules of the road from the saddle of a two-wheeler.

Burg says the incidents he deals with in his practice often involve a bicyclist not adhering to basic safety protocols or traffic codes. The following are some guidelines and laws—a few of them painfully obvious—to follow while spinning around town.

Denver’s construction-defects laws have faced significant scrutiny over the past few decades, which isn’t surprising in a burgeoning city. Local leaders such as Mayor Michael Hancock say these laws—which govern the abilities of property owners in multiunit buildings to file suits for design or construction flaws that cause damage to personal property or injury (think: a roof that allows water intrusion)—have prevented the development of affordable condominiums. That problem then leaves the city without entry-level housing stock. Here, a look at misconceptions surrounding such litigation and how things have changed in recent years.

The Misconception: A much-talked-about 2005 law has made it easier for homeowners to sue builders over defects.
The Reality: There is no 2005 law. The main principles for construction-defects litigation in Colorado come from the Construction Defect Action Reform Act (CDARA), which was passed in 2001 and amended in 2003. Brian Connolly, a land use and real estate attorney with Otten Johnson Robinson Neff & Ragonetti, says confusion with the CDARA may have produced the constant references to the nonexistent law.
What The Attorney Says: More lawyers began defect litigation in the mid-1990s, which caused an uptick in the number of lawsuits, according to Alvin Cohen, a 5280 Top Lawyer and a construction and real estate attorney with Benjamin, Bain & Cohen. The volume of class-action lawsuits made it more difficult for developers to insure condo projects.

The Misconception: Builders do not have the opportunity to repair a defect before being sued.
The Reality: The CDARA requires any party claiming defects to provide the construction professional with a 75-day pre-litigation notice. Builders have 30 days to inspect the claim and then another 30 days to offer a solution. The homeowner then has 15 days to accept or reject a proposal.
What The Attorney Says: Although intended to limit the number of class-action lawsuits, the CDARA did not necessarily deter them. Cohen chuckles at the idea that such a law would be effective because it should have already been common practice to notify someone when you plan to sue.

The Misconception: It only takes two or three owners to file a lawsuit on behalf of a homeowners association.
The Reality: In May, a state law was passed that requires majority consent from
members of a homeowners association to file a lawsuit. Previously, this could be done by as few as two members. Builders often claimed the provision impeded condo development. The law also requires an association board to inform members about the risks of litigation.
What The Attorney Says: Connolly says he thinks the new majority threshold and required notice stipulated by the law is likely to make homeowners second-guess filing claims and spur condo development in Denver.