Justin Cucci loves a good design challenge. He is, after all, the chef and restaurateur who transformed a gas station, a mortuary, and a brothel into stylish Denver eateries. So when he first set foot in this 1890 Victorian in Highland, he didn’t see a perfectly lovely historical home; he saw what he could change. “When most people move into a Victorian, they try to make everything look Victorian,” he says. “That was the last thing I wanted to do. I really wanted the juxtaposition of two styles colliding.”

The contrast Cucci had in mind was pairing the ornate finishes of Queen Anne-style architecture—which this house retained, despite having previously been converted into six apartments, then back to a single-family home—and the stripped-down materials of modern, industrial design. To merge them, he turned to Jessica Doran of Jessica Doran Interiors, Angela Coleman of Luxe Kitchens & Interiors, and Kevin Stephenson, principal of Boss Architecture, who had previously helped bring Cucci’s visions to life at restaurants Linger, Ophelia’s Electric Soapbox, Vital Root, and El Five—and knows just what makes him tick: “Justin is always pushing the boundaries of everything he does,” Stephenson says. “If an idea hasn’t been twisted around and flipped upside down, he just can’t believe it’s the right answer.” 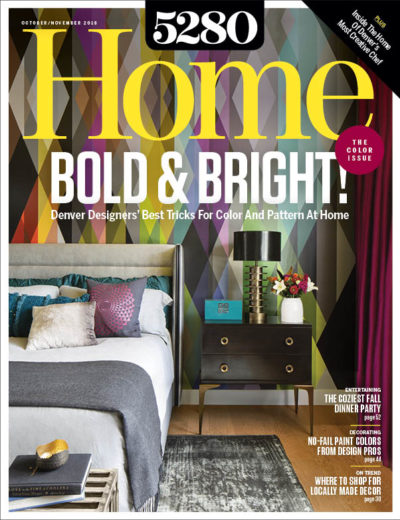 5280 Home: Marrying Victorian and modern sounds tricky. How did you decide what to preserve and what to update?
Justin Cucci: The rule was, if it’s original, let’s not touch it, but if it was added later, let’s scrap it. Now we have a really modern- looking house, but with stained glass and Victorian trim around the windows.

By removing the plaster interior walls to reveal the brick underneath, you actually brought out more of the original details.
Yes, but it’s funny because I grew up in New York City, where you never, ever painted brick. It was sacrilegious. But I’m so tired of seeing raw brick; it just doesn’t do anything for me anymore. So we painted it.

The kitchen is clearly the heart of this home. What were your must-haves?
Most of the recipe development [for my restaurants] happens here, so I had to have a combi oven, a Wolf range (with dehydrator, wok ring, griddle, and grill), a teppenyaki grill, and a giant butcher block to cut on. Most of all, I wanted a really big area to work in and make a mess.

And a place for all your cookbooks?
The steel bookcases that hold my cookbooks slide to reveal—or conceal—a powder room, freezer, and the basement. We incorporated as many built-ins as we could; I just hate having to buy cheap IKEA bookshelves.

Your dining area reminds me of a restaurant booth.
I wanted an intimate breakfast nook, but I also wanted to be able to have people over to eat. So local woodworker David Kremer designed a walnut table with a hinged edge; it pops up, we put a movable base under it, and we can fit 10 or 12 people here.

There must be a story behind that screen in the living room.
Years ago, I bought those plastic panels from an architectural scrapper, and I never knew what to do with them until we removed the wall between the entry and the living room. It felt weird to sit with my back to the front door; I wanted a wall, but I didn’t want a wall. So we cut the panels to fit, painted them to match the steel fireplace enclosure, and made a screen.

Do you have more architectural details just waiting to be used?
I have three storage units filled with them. I had a lot of tall, vertical metal blades salvaged from the old Cherry Creek post office that we used to create a privacy screen in our side yard. I have 40 or 50 more that will eventually conceal the greenhouse we’ll build by the garage.

Tell us: Have you always had a passion for design?
I think it started when I would try to inject ideas into my restaurants, but without a good sounding board to make my ideas better, I wasn’t as thrilled with the results. I like my ideas when somebody else shakes them around.

You’re pretty good at shaking things up, too.
It’s probably just a good eclectic upbringing in New York City where, stylistically, things blend into each other all the time. Architects are schooled; they know the right things to do at the right times. But I say, let’s not worry about those rules. Let’s worry about how it feels.