The transformation of the Highland neighborhood’s old Queen Anne Victorians, Craftsman bungalows, and classic cottages into modern million-dollar homes is often so dramatic, it seems a bit dizzying at times. But the most amazing thing about the rehabilitation of this 1888 Victorian isn’t its one-eighty from dreary to bright, but that its new owners—professional baseball player Josh Thole and his wife, Kathryn—decided to renovate it at all.

The three-story house had major flaws—a choppy floor plan, spooky attic, hidden basement room—and was in such bad repair, it would cost more to fix it up than to tear the whole thing down and start from scratch. But the couple fell in love with it nonetheless and felt that renovating was the right thing to do. That attitude was the perfect match for Denver-based design-build firm Design Platform, which specializes in adaptive reuse projects—and in spotting potential in unlikely places. 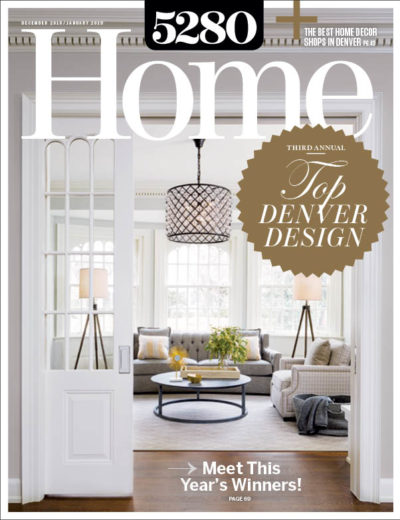 “A lot of the things you’d want from an old Victorian home had already been taken out of this house,” says Jonas DiCaprio, the firm’s principal and an architect and general contractor for the project, “but not having to work around lots of original details allowed us to focus on improving the function of the space, which needed to work for the couple and their children.”

5280 Home: From the street, this looks like a classic Queen Anne Victorian—except for that front porch.
Jonas DiCaprio: The roof that covered the front entry was falling off the house, so we had to take it—and the porch—down.
Caroline Wilding: When we realized we’d have to rebuild, we asked ourselves, “Are we going to do a fake-Victorian porch or be true to the fact that this is all new?” We decided the language for this house would be to leave as much of the original texture as we could, and make every intervention as minimal and modern as possible.

Which original details did you preserve?
CW: We approached it in a surgical way: We left specific pieces of trim, revealed areas of the existing brick, and preserved the staircase that connects the first and second floors. We repaired as many exterior details as possible, and chose a less-is-more paint palette to let the textures and workmanship shine.

So then, what did you change?
CW: The house was divided into many different rooms, which didn’t work for this family. So we combined several rooms to create an open living-dining-family area. We added a mudroom and powder room, transformed an extra room into a second-floor playroom for the kids, and turned the entire third floor into a master suite.
JD: We also made changes to help them enjoy the Colorado environment. The powder room and family room open onto the backyard, and the dining room and kitchen are oriented toward the back as well. We really wanted the outdoor space to function as an additional living area.

Did that kind of practicality drive all the finish and furnishing selections?
JD: We pushed for finishes that would make life easier. The flooring—concrete in the new addition and prefinished white oak elsewhere—is very forgiving. It has a lot of variation in texture and color, so it hides dirt well.
CW: A great example is the kids’ bedroom: Those are just mattresses on the floor—but Kathryn dressed them with amazing European bedding—and her homemade, house-shaped “headboards” are just black tape on the wall!

So many unexpected design details! Any favorites?
JD: When we were reframing the third floor, we realized that the master bedroom could have a view of downtown…
CW: So I added a skylight to the underside of the gabled roof so Kathryn and Josh can see the skyline from bed.

Did this project reveal the secret to modernizing an old Denver home?
CW: I think the key was that we weren’t trying to do a fake Victorian and make the new spaces look like they’ve always been there. It turned out to be a really nice dialogue between the old and the new.