On June 19, 1865, Major General Gordon Granger arrived in Galveston, Texas, with news that the Civil War was officially over, thus marking the end of slavery in the U.S. More than a century later—on June 3, 1979—Juneteenth was designated as an official holiday in Texas, commemorating this historic day in American history.

Today, Juneteenth is a party for the masses, celebrating African American freedom, culture, and advancements. And, because the culture is rich with art, music, dance, and food, those are the staples of the celebration across the nation and here in Denver, which is hosting its eighth annual Juneteenth Festival in Five Points on June 15–16.

For as long as I can remember, my grandmother told me Juneteenth was a safe place to celebrate my people. As an African American woman, it’s one of the few festivals in Denver I see people who look like me. The location of the event is not lost on me either—Five Points’ ascendancy as the Mile High’s most historic black neighborhood makes it the ideal spot for such a festival.

Before Norman Harris took over the Denver event in 2011, Juneteenth was no more than an afterthought. But under Harris’s direction, the festival has evolved to become a cornerstone in the Mile High City’s African American community. “When I was a youth, Juneteenth was the most exciting part of the summer, so one of our high-level organizational goals is to re-establish Juneteenth into the hearts of our community,” says Harris. “We are working to improve the aesthetics this year, and we are hoping to get a wow from returning attendees.”

From epic musical acts to a first-ever celebration of black beauty and fashion, here are four things happening during this weekend’s celebration that you won’t want to miss. 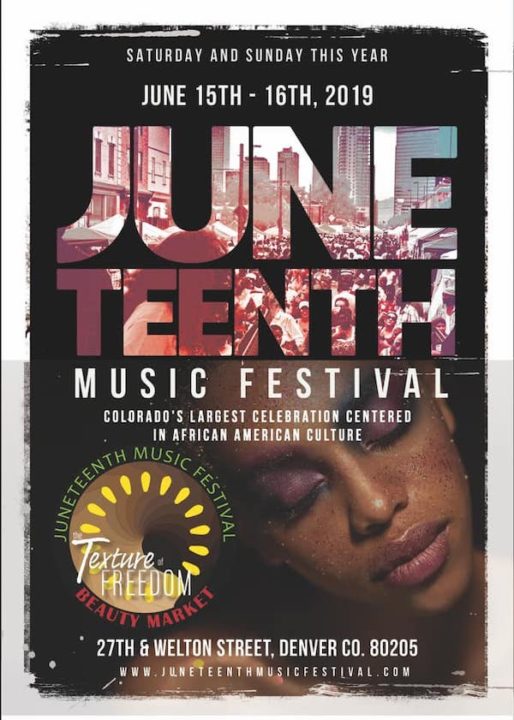 Juneteenth has consistently brought big-name acts to the stage (previous years have seen performers like Jadakiss and Slick Rick). But this year will be one for the history books, as Grammy Award-winning songstress Ashanti is set to headline the festival on Sunday. The R&B princess, who shot to fame in the early 2000s after her self-titled album hit number one on the Billboard Hot 100 chart, will be bringing a dose of millennial nostalgia alongside her melodious voice for a performance that is likely to be a highlight of the weekend.

On Saturday, festival-goers can catch the headlining performance of German-born singer Ro James—an R&B phenom whose sultry voice can be heard on hits like “Permission” and “Burn Slow.” While general admission to these shows is free, those who want to get a closer look can purchase VIP tickets for $50 or rent eight-person cabanas with bottle service from $1,000–$1,500.

The Texture of Freedom Beauty Market

New at the 2019 Juneteenth Festival, Denver native Cynthia Martin teamed up with Analise Harris of Curls on the Block—a nonprofit enrichment program that helps young girls of color explore STEAM education—to create the Texture of Freedom Beauty Market. This space will celebrate black beauty and promote black-owned businesses through tutorials, demos, meet-and-greets, and more hosted throughout the weekend. “We needed people to understand that they should spend money and support black businesses,” says Harris. “Beauty is all-encompassing—from makeup, hair, skin, nails, and fashion.”

On Saturday, attendees will find everything from a head wrap demo to a tutorial on how to create LED floral crowns ($5 donation recommended). And on Sunday, the space will host a fashion boutique, as well as a braid tutorial and a demo on how to make a Cowry shell necklace. “I think: What does freedom feel like? What does freedom sound like? What does freedom look like?,” says Harris. “Being a woman of color, I wanted the Beauty Market to highlight those feelings of pride I have every day.”

Throughout the weekend, Welton Street will overflow with vendors from across Denver (and beyond). Get your grub on with Charlie’s Smoked Meats, Big G’s BBQ, or Reggae Pot Express. Or, level up your wardrobe with Elevate Fashion Boutique and snag some hand-made pieces from Jewelry By Sankofa. For the little ones in tow, don’t miss the Denver Museum of Nature and Science’s booth, which includes a kid-friendly flying activity. There’s truly something for everyone—no matter your age or interests.

Start your Saturday with thousands of Denverites by participating in the annual Juneteenth Parade. Attendees will gather at the Manual High School Parking lot on 26th & Gilpin Street at 11 a.m. for the official kickoff to the Juneteenth celebration. The purpose of the parade is to pay homage to those who fought for freedom from slavery and reflect on the progress that has been made for African Americans in the U.S. (and how far we still need to go).

If you go: The Juneteenth Festival takes place June 15–16 at 27th and Welton streets in Denver’s Five Points neighborhood. The festival is free to attend.