5280 Home: Your house is beautiful. What’s the backstory?
Amy Purdy: We moved to Colorado [after living in Tahoe and Idaho], so I could prepare for the 2014 Paralympic games. After I did Dancing with the Stars, we really wanted to have roots somewhere. We were so tired of renting places and moving a bunch. We kept our eyes open, thinking, “OK, maybe we’ll buy a condo.” But then this house popped up, and I ended up buying it before I even came to check it out, just based on looking at it online.

That’s a bold move.
I know. [The house] spoke to us because it’s in the mountains. It’s in Silverthorne, and what’s so beautiful about this area is that we’re close to everything. We are a mile away from the freeway, yet you don’t hear it; you don’t see it. We’re far enough in the mountains that we’ve seen moose in the yard, and bear and fox. It really feels like we’re just tucked in the aspen trees. 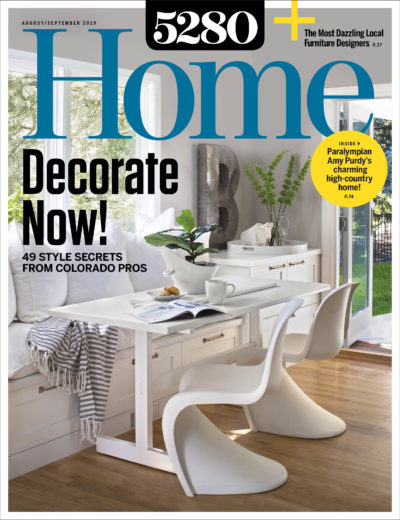 Was the house itself so idyllic when you bought it?
The house was built in the 1970s and was really out of date, but it had potential. The house is very square, and it’s three stories with a wraparound porch, plus a detached garage with this awesome bonus room up above it, which was already renovated with an entire bedroom and bathroom. The house had little windows, but this beautiful view, and so we thought, “Gosh, if we put picture windows in with these aspen trees, it would have such a pretty view, and we’d actually be able to make this place look more modern!” There was something clearly charming about it, yet it needed so much work—even more than we knew we were getting into.

Did you plan to do the work yourselves?
There’s definitely some stuff that we D.I.Y.’ed, but we quickly realized we would need a contractor. Unfortunately, our first contractor got us in quite a bit of trouble: He ripped out stabilizing walls without the proper permits. We were neck deep before we realized there was no way out. We brought in other contractors and basically had to redo everything. We gutted this house from the inside out, pretty much.

Nightmare! Were there any silver linings?
Of course, it was costing way more [than we had expected] and taking a little longer, so we decided to get creative with some stuff—for example, our staircase, which was an old, dark eyesore right when you opened the front door. We were able to expand it a little bit and bring it up to date, and we tore down the walls so you can see through it. We ended up making the rails out of metal electrical conduit [tubing] from Lowe’s, and we spray-painted it flat black.

Brilliant! Other hacks you’re especially proud of?
In the kitchen, we really wanted a grayish wood [on the front of the island], and I had such a hard time because every kind of stain we would use would bring the red out. I did a lot of research on Pinterest, and what we ended up doing is putting steel wool in a Mason jar with vinegar. You soak it for a day or two and then when you brush [the steel wool] on the wood, the combination oxidizes the wood and makes this beautiful, natural finish in the color we wanted.

And you love the rest of the house?
It’s exactly what we envisioned, and we’re thoroughly enjoying it. It feels like we’re in a treehouse; when you look out the picture windows, it’s almost like [the views are] these gorgeous pictures on the wall. Even though we went through so much, it was worth it because it’s totally us.