Emily Lockwood admits it: She wasn’t so sure about the antiques at first. Just a few months before she and her husband, Scott Hutchinson, bought their home in Southmoor, Scott’s grandfather passed away, leaving a house in Sea Island, Georgia, brimming with old furniture and relics from world travels. Lockwood understood that her new home could be the ideal repository for the pieces—everyone else in the family already had furnished homes. But she also knew that the antiques would be subjected to her two young daughters’ sticky fingers and games of tag gone awry. “Some of [the pieces] just looked too fancy to have in the house with two little kids,” she says.

Lockwood’s interior designer, Jess Knauf, wasn’t worried. This home would be her first project since starting her company, Jess Knauf Design, but because she had worked for several firms around Denver before striking out on her own, she knew from experience that a smart risk could pay off significantly. What’s more, Knauf—a friend of Lockwood’s sister—had known the family for years and suspected that, with some clever updates, the antiques would fit perfectly with the couple’s aesthetic: “Scott and Emily are both
fresh and fun and young, with this vibrant family,” she says. “But their style is also a tiny bit traditional.” 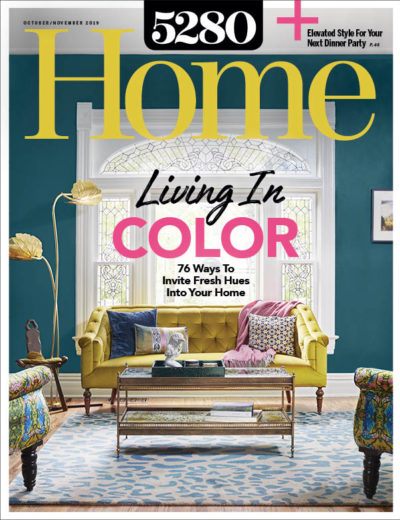 Knauf’s plan to modernize a lot of the old furniture convinced Lockwood. Using photos and measurements of the pieces, they mapped out where each one might go, allowing the antiques to steer the layout (the house’s original architecture remains). Shape and scale were the duo’s main concerns. After all, Knauf says, fabric and paint can, and should, change. She wouldn’t alter valuable vintage items, of course—treasures including the living room’s ornate gold mirror, a souvenir from a trip to China, remain untouched—but she did update less-precious pieces with a few creative tweaks.

That approach pays off throughout the 1968 Cape Cod–style home. The same bamboo headboards Hutchinson used as a child were lacquered in an off-white paint, reupholstered, then placed in the oldest daughter’s bedroom. The sofas in the living and family rooms are also from Sea Island, but refreshed with new fabric. An inherited mirror in the girls’ bathroom received a coat of bright green paint. “Sometimes people get scared of change. They think, ‘Oh, I could never paint my grandmother’s side table,’ ” Knauf says. “But I think it’s OK if those pieces evolve within a family.”

The transformed antiques fit seamlessly with the rest of the house, a veritable study in daring pattern and color selections. The living room, painted Benjamin Moore’s cheerful Queen Anne Pink, is populated by chairs reupholstered in a peach zig-zag pattern and two inherited lamps updated with black-lacquered shades—just edgy enough to keep the room from feeling saccharine-sweet. The dining room sports a Bob Collins & Sons Chippendale navy wallpaper with a sprawling vine-and-flower motif.

The key to incorporating patterns, Knauf says, is fearlessness. She suggests experimenting in small rooms, where a busy design is less likely to feel overwhelming. In the girls’ bathroom, for example, she combined two patterns: The wallpaper is Albert Hadley’s Fireworks print, and the window shade shows off whimsical butterflies with touches of green that play well with the aforementioned mirror. “If we had done that in the living room, it would maybe have been overwhelming,” Knauf says. “With teeny-tiny rooms, I think you can take a little bit more risk.”

The final factor in a home that balances style with the needs of a lively family? Indestructible furniture in kid-centric spaces, from an IKEA bookcase in the nursery to a Bungalow 5 lacquered grasscloth coffee table that’s tough enough to withstand any toys hurled its way. The end result is a living space that ties the past to the present. “Seeing it all together, I’m glad we did it this way,” Lockwood says. “I knew that I wanted our house to feel vibrant and different. Jess helped push me to think about how that could come to life.”