Colorado history is about more than miners and cowboys and cannabis pioneers. To illustrate this textured record, we dug into Colorado museum collections to find out what some of their most treasured pieces reveal about our heroes and our lore.

How The West Was Won

American Flag | 1861
With the U.S. Navy blockading his shipping channels, Jefferson Davis, president of the Confederacy, dispatched the Texas Mounted Volunteers in 1861 to head toward California, where the rebels might find friendlier seas. They were met by the 1st Colorado Infantry, who carried this four-by-nine-foot flag (pictured above), in March 1862. Although the South claimed victory, a Union force led by Major John Chivington destroyed the rebels’ supply train, ending the South’s lone attempt at a Western invasion. Chivington’s legacy, though, was far from heroic: Two years later, the former preacher ordered his 3rd Colorado Cavalry to attack a peaceful camp of Arapaho and Cheyenne, killing more than 200 in what today is known as the Sand Creek Massacre. Find It: History Colorado Center, Denver 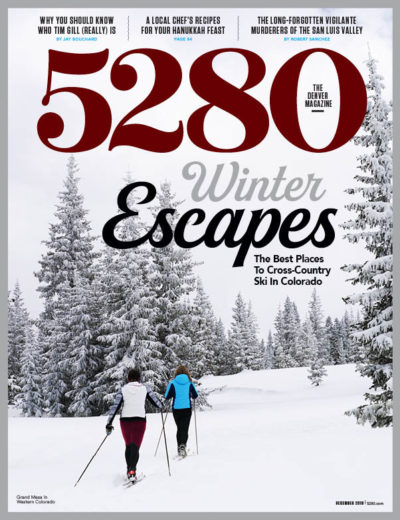 Chances are you’ve passed by this coat (or a version of it) without realizing it: In 1911, sculptor Frederick MacMonnies reportedly modeled the towering bronze horseman in Civic Center Park’s “Pioneer Monument” after Christopher “Kit” Carson, who first earned fame by serving as a scout during the covert mission to conquer California during the Mexican-American War. Dime novels seized on the diminutive frontiersman’s adventures, casting five-foot-four Carson as everything from a vicious fighter of Native Americans to the discoverer of California’s gold. There was some truth to the former: During the 1860s, Carson directed a ruthless strategy to starve Navajos in the Four Corners region and force them onto a reservation. Hundreds—maybe thousands—died. Although Carson didn’t profit much from the quasi-fictional tales, his purchase of this coat, likely from a store in Las Vegas, suggests that he attained a relative degree of wealth. At the time, most clothing in the West was sewn by hand. The maker of this jacket used machine stitching, an expensive novelty, to thread elaborate turquoise and coral designs that have since faded—unlike Carson’s personal legend, which still remains vivid 151 years after his death. Find It: History Colorado Center, Denver

U.S. Army 10th Mountain Division veteran Pete Seibert deserves credit for founding Vail Ski Resort in 1962. But it was Ann Bonfoey Taylor who transformed the quiet tract of ranch country into the glittering court of trendsetting elegance Vail is today, says Dana Mathios, curator of the town’s Colorado Snowsports Museum and Hall of Fame. By the time she arrived in Eagle County in 1963, Bonfoey Taylor had already trained pilots during World War II, served as an alternate for the U.S. Olympic ski team, and launched a clothing line. Her manor became the social nexus of Vail, entertaining the likes of Truman Capote. More important, the socialite tapped her fashion connections, such as Vogue editor Diana Vreeland, to publicize Vail’s growing glamor. She was more than happy to prove that style herself by posing for Life, Town & Country, and Harper’s Bazaar, which honored her as one of its “One Hundred Great Beauties of the World” in 1967.

This mostly handmade ensemble, built around a fur leotard, was one of 30 garments gifted to the Colorado Snowsports Museum following her death in 2007. The museum re-cataloged the clothing archive in greater detail in 2018, and Mathios’ resulting exhibition, 100 Years of Ski Fashion and Function Featuring: The Ski Couture of Ann Bonfoey Taylor, will run through November 2020. Find It: Colorado Snowsports Museum and Hall of Fame, Vail

When Spencer Penrose (along with 50,000 others) traveled to Colorado Springs to find his fortune during the 1890s Cripple Creek gold rush, the streets teemed with horse-drawn wagons. Three decades later, the mining baron’s 1918 Pierce-Arrow harnessed the power of 125 ponies to roar to the top of Pikes Peak. “The Penroses,” says Sarah Rogers, curator of the Penrose Heritage Museum in Colorado Springs, “saw the evolution of transportation, from carriages to race cars.” More than most, Penrose understood the role cars would play in shaping 20th century American society. In 1916, two years before he opened the Broadmoor Hotel, Penrose built a 19-mile highway to the top of Pikes Peak and started the Pikes Peak International Hill Climb, a race to the summit that is still held annually, to draw publicity to the region. He also purchased a fleet of 1912 Pierce-Arrow touring cars to chauffeur visitors around the scenic landscape—although he bought this newer one for himself. Modified into a race car, the Broadmoor Special, aka the Yellow Devil, ran the hill climb eight times. It never won, but thanks to a 2016 overhaul, Penrose’s ride still looks as if it could. Find It: Penrose Heritage Museum, Colorado Springs

In October 1962, with the country in the panicked grip of the Cuban missile crisis, U.S. Strategic Air Command moved into DEFCON 2—the second-highest threat alert possible—for the first time. Suddenly, the North American Aerospace Defense Command (NORAD), an organization based upon a strategic partnership between the United States and Canada, was staring down the exact type of in-bound, doomsday attack it had been created five years earlier to prevent. Headquartered at now-decommissioned Ent Air Force Base in Colorado Springs (NORAD wouldn’t move to the Cheyenne Mountain Complex until 1966), NORAD deployed 155 interceptor planes to 20 bases within five hours and 40 minutes. It also stationed 140 fighters in the eastern Gulf Coast region. Moreover, should American forces have needed to invade Cuba, the military tasked NORAD with escorting paratrooper-filled planes to a staging area in the Florida Keys. To direct these logistics from Ent, NORAD employed 22-inch-tall, high-security telephones to connect its defense units across North America. Although the U.S.-Canada coalition ultimately wasn’t called upon to show its full strength, it proved to both our allies and our enemies what it could do. Find It: Connections Museum Denver

Spaniard Francisco Vásquez de Coronado and his army of explorers were probably the first Europeans to wander into what would become Colorado, likely crossing the Eastern Plains during their 1540s quest to locate the mystical Seven Golden Cities of Cibola. (Spoiler alert: They didn’t find them.) It wasn’t until the Adams-Oñis Treaty of 1819, however, that Spain’s northern border was firmly established at the Arkansas River and Sabine River Mouth—which became Mexico’s northern border after it won independence two years later. Mexico feared Manifest Destiny–crazed Americans would push into the largely unpopulated territory, so the New Mexico governor promised free land to citizens who would settle it. This legal document afforded Gervacio Nolan, a French Canadian turned Mexican citizen, half a million acres stretching from near Pueblo to Trinidad. Unfortunately for Nolan’s descendants, the land was ceded to the United States in 1848 after the Mexican-American War. Despite the terms of surrender guaranteeing property rights to Mexican landowners, U.S. Congress reduced Nolan’s claim to 48,700 acres. Battles over a different grant, the Sangre de Cristo, lasted until 2002, when the Colorado Supreme Court ruled that the descendants of its original owner were entitled to grazing and other rights on a ranch that had since been purchased by a North Carolina millionaire. Find It: Pueblo City-County Library

Few artifacts encapsulate a culture’s values better than this headpiece. Its 35 eagle feathers pay homage to a sacred Ute animal that represents honor and strength; it’s threaded with horsehair, a tribute to the tribe’s most valuable possession; and four white ermine skins symbolize strength and purity. “This is what’s called a war bonnet,” says Chip Colwell, the senior curator of anthropology at the Denver Museum of Nature & Science. “It was only supposed to be worn by those people who’d achieved true status as warriors in their society—men who received honor and respect from their peers.” Colorado’s longest continuous residents, the Utes gained a reputation as adept fighters following their 16th-century introduction to horses, brought to the Southwest by Spanish explorers. They became skilled horsemen and used their new capabilities to expand from their traditional lands in Utah, Colorado, and New Mexico into Texas and Oklahoma. In the mid-19th century, the Utes found themselves outnumbered by settlers migrating west, and they signed a series of treaties that forced them onto reservations. Today, the Northern Ute Indian Tribe resides in northeast Utah, while the Southern Ute Indian Tribe and Ute Mountain Ute Tribes are based in southwestern Colorado, where this ceremonial war bonnet was made in the 1950s. Find It: Denver Museum of Nature & Science

Lucile Berkeley Buchanan Jones’ heels took her down the aisle at her wedding, to African American league baseball games, and to meet friends at the park after a long week of teaching English at a Kansas City high school. One place they couldn’t carry her, though, was across the graduation stage at the University of Colorado Boulder. In 1918, Buchanan, the daughter of emancipated slaves, became the first African American woman to earn a degree from the school, but the administration barred her from walking during the commencement ceremony. Compared to other states, Colorado was relatively progressive in the early 20th century. Many black residents—such as hair-straightening impresario Madam C.J. Walker, whom the Denver Star hailed as “the richest Negro in America”—owned businesses, and by 1938, nearly 40 percent of African Americans in Denver were homeowners. “Colorado didn’t have Jim Crow laws,” says Polly McLean, a CU Boulder media studies professor and author of Remembering Lucile: A Virginia Family’s Rise from Slavery and a Legacy Forged a Mile High, “but there was racism and colorism in the state.” Some blacks, including Buchanan, never found opportunity here. CU Boulder finally honored Buchanan during its commencement events in 2018, a century after her groundbreaking academic achievement and nearly three decades after her death at age 105. Find It: Museum of Boulder —Kim Habicht

Some 5,000 years ago—around the time construction began on Stonehenge—the owner of this sandal entered a cave in present-day Franktown. He had made the footwear out of Colorado’s yucca plant, threading its fibrous leaves together to construct what’s essentially a prehistoric Birkenstock, and wore it while walking the state in search of bison, deer, seeds, and berries. He likely returned to this central Colorado fissure for shelter during the winters and to pick up supplies his tribe had stowed there, but at some point, he left the sandal behind after wearing through the toes and heel. The cave kept the piece remarkably preserved for five millennia—until University of Denver archaeologists started excavating it in 1942. DU’s work at the Franktown site until 1957 resulted in perhaps the most preserved archaeological plot in eastern Colorado, and while we don’t know what exactly befell those inhabitants, DU archaeologists did discover that different tenants moved into the cavern 4,000 years later. Their relics, combined with tribal characteristics such as linguistics, allowed researchers to trace their lineage to the Athabaskan tribes of Alaska. Moreover, they seem to only have stopped temporarily in Franktown on their way to southern Colorado, New Mexico, and Arizona, where they became better known as the Apache. Find It: University of Denver Museum of Anthropology