The challenge was considerable: Design a brand new house with all the comfort of a place that has been in a family for generations, and that makes passersby wonder if it might be one of the original homes built in the Observatory Park neighborhood—once a country retreat for wealthy Denverites weary of the hustle and grime of 19th-century city life.

Lucky for Kim and Steve Davis, the husband-and-wife homeowners issuing this design directive, it was a task their residential designer Stephen Hentschel had tackled many times before—though this one would not only draw upon his classical training, but also upon his childhood memories of the beautiful old homes of France. 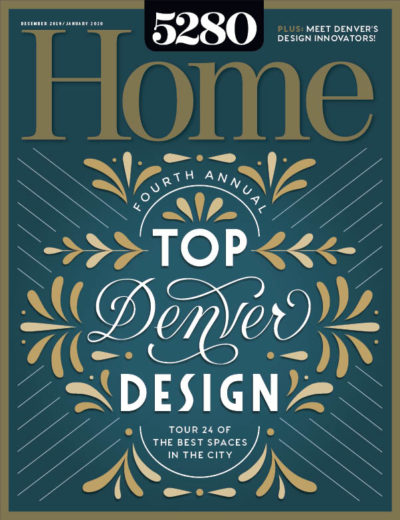 “When I lived in Barisis, France, as a child, our next-door neighbor had a simple, boxy, stone house with the most interesting front doors,” Hentschel recalls. “It was a pair of double carriage doors that the original owners would drive their horse and buggy through and into an interior courtyard, which was like a little cobblestone driveway through the house. Contemporizing that look for a modern lifestyle became the concept for this new house.”

From the outside, the Davis’ home looks quite similar to the one from Hentschel’s memory. Clad entirely in French limestone, it has a symmetrical front facade that frames a recessed front door, operable vertical-plank shutters, and a pair of chimneys that flank a hipped roof. In the entry hall, Hentschel paid homage to that cobblestone driveway with floors of thick, reclaimed pavers; he placed a formal dining room on one side of the passageway and a study on the other. But that’s where his adherence to tradition—and symmetry—ends. At the end of the hallway, and at the foot of a grand staircase, the floorplan loosens up into an open-plan gathering room, kitchen, and dining nook, and—just beyond a series of French doors—inviting outdoor gathering spaces by landscape architecture firm Elevate By Design.

Kim, an interior designer and artist, planned to fill the new rooms with the collection of patinaed antiques and textiles she and Steve have gathered over the years, creating a look she describes as “South of France meets Santa Fe.” Her approach: “I’m all about buying what catches my eye, and the softer and mellower the colors, the better. I also love a bit of crunch—texture!” To create a backdrop to highlight those treasures, she collaborated with another pro, interior designer Angela Coleman, who helped her select and implement the home’s finishes and fixtures.

“My design challenge was to get that palette [of materials and finishes] as neutral as possible in order to showcase the homeowners’ furniture and rugs, which have so much texture and pattern and color,” Coleman says, “and, just as importantly, to find homes for all the unique pieces that Kim fell in love with.” Among those finds was a French Directoire-style fireplace surround that Coleman and Hentschel painstakingly modified to fit the great room’s modern fireplace, and salvaged sets of antique doors that mark the entries to the dining room, study, wine room, and master suite’s dressing room.

In the kitchen, where nearly every design detail is new, Coleman and Davis took great care to give each finish a sense of permanence and age. Just below the room’s dormer window, a patinaed stainless-steel hood accented with brass straps is mounted above a handpainted-tile backsplash; to the right, copper pots and pans hang on the wall, just as they might in a French country kitchen. Distressed cherrywood cabinets designed to look like furniture pieces support soapstone countertops along the room’s perimeter and reclaimed wood planks on the island—two materials guaranteed to show evidence of use, which is exactly the look Kim was after. “ ‘The more imperfect, the better’ was our mantra,” Coleman says.

Creating a place for imperfection in a new luxury home may have felt natural for the project’s design minds, but for perfectionistic superintendent Doug Westfall, the unusual approach was a challenge. “When we asked Doug to install real, full-bodied floor pavers in the entry hall, he protested, ‘But that’s not going to fit with the threshold; how will we open those doors?’ ” Coleman recalls. “But we said, ‘That’s great; we don’t want it to be flush.’ The harder it was for him, the better it was for us.” And, as it turns out, the better it was for one of Denver’s most distinctive old neighborhoods, which feels a bit more like its old self with this new house in the mix.