You know a good home renovation is in store when the lead architect says he’s going to “raise the roof” on a project. And in this case, architect Scott Hamman of Nest Architectural Design meant that quite literally. In order to breathe new life—and lots of light—into this redbrick, 1959 ranch, he peeled off the entire gable roof and raised the ceiling on the back half of the house a full two-and-a-half feet. This single shift eliminated an awkward step-down into the kitchen and made way for a band of clerestory windows that washes the central living areas with natural light—bringing the once dark and dated house into the 21st century.

“We love midcentury architecture and the Park Hill neighborhood,” says the homeowner, who, prior to purchasing this house, lived in a cottage in Whittier with her husband, young daughter, and dog. “There’s not much available [in the neighborhood] that is midcentury, and this house had been on the market for a while before we bought it. I don’t think people could see its potential.” A series of unfortunate renovations in the 1980s and 1990s gave the interior a Frankenstein-esque vibe, and the home’s location—on Colorado Boulevard across from City Park—created some road-noise challenges. It would take a special person to envision what it could become. “Even now,” the homeowner laughs, “some people think it’s an office building.” 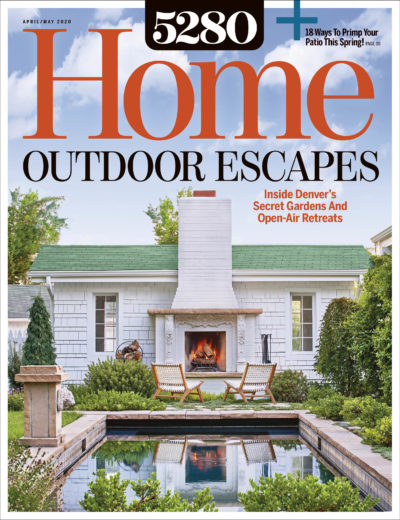 But for the homeowner, a hobbyist designer with an eye for modern style, and her husband, a former chef who is now in the wine industry, the home’s good bones and large lot were just the right fit. After seeing some of Nest’s work around the city—the celebrated architecture firm has been recognized for years for its renovation work—the homeowners brought Hamman and Nest founding architect Scott Parker on board. “We were tapped to restore the home to its original essence,” says lead architect Hamman. The collective vision? “A home about connection and light,” Hamman says.

The home’s footprint was about 4,300 square feet—a lot to work with—so an upstairs addition or major demo was immediately ruled out. Instead, Hamman played an intricate game of room Jenga to make all the pieces fit. He enlarged the sleek gourmet kitchen (with bifold window for indoor-outdoor entertaining) and added a proper master suite (increasing the home’s footprint by about 580 square feet). The original master bedroom and oversized study were turned into a home office and two bedrooms (one for the couple’s daughter and the other for guests). In the dining room, an accordion door creates a seamless transition to the large backyard and new patio area. And downstairs, the spacious basement got cosmetic upgrades to become a family flop area and guest quarters. In the center of the house, an elegant, walnut-paneled storage wall that Hamman now refers to as the “walnut core” provides an art niche and coat closet on the living room side, and cabinets and pantry for the kitchen. The wall is detached from the beamed roof, allowing natural light in and views of mature trees over the top.

On-trend finishes—such as floating walnut vanities and screen walls, elongated-hexagon backsplash tile, and sleek white cabinets—feel right at home in this contemporary setting. The furnishings, selected by the homeowner, are a mix of period and vintage-inspired pieces, including a Knoll coffee table, brass chandeliers, and white bucket dining seats.

At a time when seemingly everyone is painting brick exteriors white, the team wisely decided to preserve this home’s original redbrick facade. The architect modernized the look by adding new aluminum-clad windows, powder-coated-steel structural beams, and Thermory screen walls. He also tore off a clunky fascia from a former renovation to reveal the home’s original beam work, which he painted a warm taupe.

The home’s sharp angles and brick, steel, and walnut finishes were guiding themes for Paul Wrona, principal at Elevate By Design, the landscape design firm tapped to create an exterior living space equal to the home. For the new back patio, he designed a brick pizza oven inspired by European versions the homeowners had seen on their many trips overseas for work. Wrona also devised a handsome, low-profile concrete water feature that doubles as a seating area and white-noise generator to drown out the sound of traffic. A mix of Colorado-friendly plantings including miscanthus grass, English lavender, purple coneflower, lilacs, pear trees, and serviceberry soften the concrete architectural walls that Wrona designed to extend the home’s clean lines to the outside. An added bonus: “The walls provide additional seating for guests and entertainment for kids to play on or kick a ball against,” Wrona says.

The result is a hardworking family house that’s perfect for parties that spill outside. Says the homeowner: “We never wanted to change or erase the vibe of the house—the open dining and living area were there. We just wanted to update the house while keeping a midcentury feeling.” All thanks to a plan that began by raising the roof.