Imagine waking up at six in the morning for your 7:30 fencing lesson, running at least six miles at 8:30, swimming laps by 11 o’clock, heading to 2 p.m. shooting practice, and then finishing with strength and conditioning at 3 p.m. That was the daily itinerary of modern pentathlete Samantha Schultz Achterberg—give or take a physical therapy session or yoga class—as the Littleton resident prepared for the 2020 Summer Olympics in Tokyo. So imagine her disappointment when, in March, the International Olympic Committee (IOC) announced it was postponing the tournament until July 2021 due to the COVID-19 pandemic.

Be it a wedding, graduation, school dance, or Snoop Dog and Cypress Hill at Red Rocks, most everyone has experienced the disappointment of a much-anticipated event being canceled by the novel coronavirus. But chances are your mothballed event wasn’t an only-every-four-years worldwide smackdown featuring competitors from 205 countries.

So we were as surprised as anyone when we checked in with three Centennial State Olympians—and discovered them to be pretty OK about the whole thing. And if they can be upbeat after the deferral of their hopes and dreams, surely the rest of us can manage the stay-at-home order with a bit more positivity. But just in case you need a little help lighting your torch, we asked this trio of athletes to share advice about how to stay optimistic when it feels like someone pressed pause on your life.

When Colin Duffy found out about the IOC’s decision to postpone the Olympics, he felt relief. The 16-year-old Broomfield resident and member of the USA Climbing Team had spent the preceding weeks overwhelmed by the news of the spreading coronavirus, wondering how he could possibly travel to train for the competition.

But once someone else made the call to suspend the Games, Duffy could relax. He no longer had to weigh the risk of his own health against the potential reward of being in top condition for the July competition. Plus, Duffy—who, remember, is only 16—viewed the postponement as an opportunity to grow stronger and reach “peak strength” by 2021.

Achterberg also grew anxious about training as she watched gyms and other facilities—including the U.S. Olympic & Paralympic Complex in Colorado Springs—close due to the pandemic. “I’m supposed to be in tip-top shape,” she explains, “I’m losing ground every day.” Achterberg still held on to a show-must-go-on mentality, planning to head to Tokyo if the Games proceeded, so the postponement almost felt like a commuted sentence. And while she doesn’t deny that the news was still disheartening, she’s trying to remember that even the global Games are of small concern next to the global pandemic: “It’s hard to have that excitement when we’re just trying to get through day by day, week by week, and people are fighting for their lives.”

Athletes have had to improvise while exercising at home, where they don’t have access to the amenities they’re accustomed to using. For Achterberg—the modern pentathlete, whose event comprises shooting, fencing, swimming, riding, and running—that means converting her garage into her own personal fencing gym to practice her lunges and parries. She’s even posted a video of what her training looks like on her YouTube channel, where you can watch her vanquish tennis balls.

Keeping in shape as a climber takes even more imagination: Olympians and amateurs alike have taken to bouldering around their homes or apartments, using kitchen counters as handholds or treating patios as rock overhangs. Brooke Raboutou, one of Duffy’s teammates on the U.S. climbing squad and a Boulder native, posted a clip of herself scaling the exposed staircase in her home and then traversing her fireplace. Not to be outdone, Duffy recorded the first ascent of the “Contrived Pillar Problem,” a self-rated v4 (and stone patio pillar at his house), in an Instagram video.

That being said, if you’re not an experienced climber—and even if you are—we don’t recommend scrambling up the side of your house. Instead, check out Movement climbing gym’s online training classes or order a hang-board online.

Pre-COVID-19, half of Emily Stockman‘s day used to be dedicated to conditioning, recovery, massage therapy, and sports psychology. Now, the U.S. Beach National Team volleyball player (qualifying tournaments were canceled before the Olympic squad was decided) does all of that virtually. The Colorado Springs resident chats with her sports psychologist on the phone, does online yoga, and catches up with teammates regularly via text message and FaceTime. Despite the remote setup, she says that the team’s trainer still manages to push them through some “gnarly workouts.” (Don’t believe her? See the photos below.) 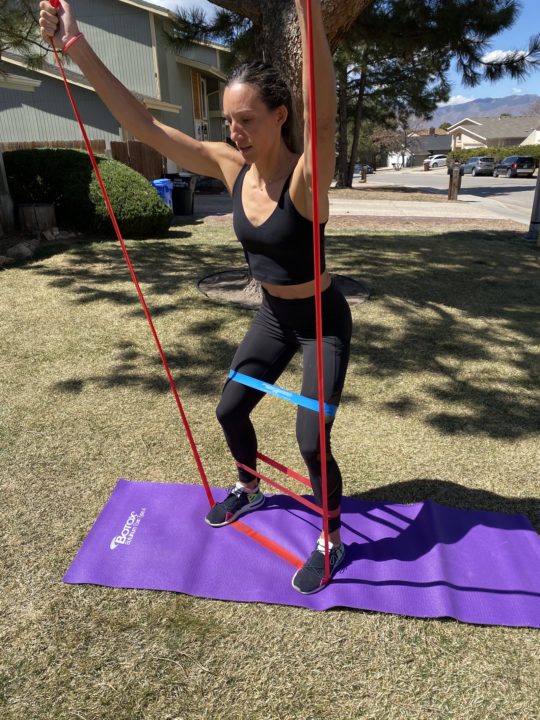 You’re probably not a world-class athlete (sorry to break the news), so you likely don’t need daily recovery treatment. However, since you’re forced to endure more rest days than normal during the stay-at-home order, you might as well take the opportunity to nurse lingering injuries back to full health. Fortunately, a number of local providers—the Fitness LAB, Atlas Physical Therapy, Pro Active Colorado, and Therapydia, to name four—offer telehealth physical therapy appointments, meaning you can be back to 100 percent by the time your racquetball league resumes.

But also don’t be afraid of doing nothing. Achterberg, who plans for the 2021 Games to be her last so she can start a family, says it’s nice to have an excuse not to go to the gym and spend more time at home. “And to sleep in a little bit!” she adds.