Jessica and Zach Zeldner love living in downtown Boulder. The area’s blend of young families, college students, and longtime residents creates an eclectic community in which the couple are glad to be raising their sons. “We’ve never wanted to live in a place where it’s the same type of family, house after house,” Jessica says.

But by 2015, the Zeldners faced an unpleasant fact: Their impeccably located home was proving to be too small for their family. Loath to leave the neighborhood, the couple hopped on the first viable home for sale, a 1920s one-story bungalow mere blocks from the Pearl Street Mall. “It had a backyard and gorgeous brick walls,” Jessica says. “It hit the market, and we were there before the day ended.” 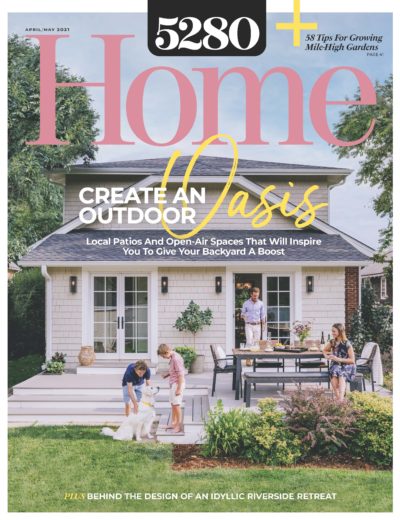 Despite its prime location and curb appeal, the home posed some problems. Years prior, it had been divided into a triplex, and the interiors hadn’t even been painted, much less renovated, in ages. “It was like a time warp when we first walked in,” Jessica says. Even so, the couple purchased the bungalow, then quickly called in reinforcements in the form of Steve and Lesley DeFrees, owners of DeFrees Design and Development in Boulder. Their assignment? Create a cohesive, functional home while maintaining the integrity of the original structure—and incorporating local artistry and a few nods to the Zeldners’ personal history to make it feel like their own. “It was important to me, as much as we could, to find pieces that either supported local artists or had a personal touch or meaning for us,” Jessica says.

But first came function. With two growing boys and a rambunctious English cream retriever, the Zeldner family needed more space than the cottage’s original 1,258 square feet provided on the main floor, so the DeFreeses built a 1,022-square-foot second story that contains three bedrooms, two bathrooms, and a laundry room. They also gutted the first floor, allowing for an internal revamp that prioritized natural light. To the basement, the team added a guest bedroom, exercise room, and game room. To maintain delineated spaces that still feel welcoming, Lesley eschewed a fully open floor plan and installed doorways to each room—minus the doors. “It creates a sense of coziness,” she explains, “and allows each member of the family to enjoy their own space.”

In the backyard, Steve created a deck where the family can hang out and enjoy meals; the lawn beyond provides plenty of room for the boys and dog to play. Plus, “being able to open up the double doors [in the back of the house] and create a kind of indoor-outdoor feeling for a good part of the year was super important to us,” Jessica says.

As the home came together, the design team turned to local artisans to blend an ageless aesthetic with the Zeldners’ personal history. Case in point: Lafayette’s Schacht Mill Works provided the trim and crown molding throughout the house, as well as the shiplap finish in the television room, mudroom, and kitchen—a nod to Jessica’s childhood in Maine. A Boulder-based custom furniture-maker, Chris Shutze, hand-welded the square dining table’s steel frame so it could seat eight people without requiring a center support.

Jessica grew attached to the wavy, bubbled glass used in some of the home’s original windows. “I think I drove everyone a little nuts because I was determined to have that glass reused,” she says. A local stained-glass repairman integrated the old panes into the pocket doors separating the dining and family rooms.

When the DeFreeses completed the shell of the home in 2016, the Zeldners called in interior designer Jennifer Rhode for the finishing touches. “They have busy lives and just wanted a space that felt really peaceful,” Rhode says. With that in mind, she employed a neutral palette punctuated by crisp black tones, leaning on lush fabric choices to add texture and warmth.

That subtle palette was the ideal backdrop for more of the Zeldners’ prized possessions, including a set of vintage caned chairs the couple had collected over time and prints Zach’s grandmother purchased during her travels through Southeast Asia. Four portraits of their sons (two of each boy) painted by William Irving Singer, an artist the couple discovered at the Boulder Creative Collective, received prominent placement in the sitting room at the front of the house. “I love starting with the pieces that have meaning,” Rhode says. “It wraps your home up in your family’s story more.”

And now, as the pandemic has reestablished the importance of home, the Boulder bungalow has become the backdrop for the Zeldners’ new stories. “All of a sudden, all four of us were home,” Jessica says. “We really expanded into all four corners.”