When Dara Deshe first encountered the Denver Country Club house that would become her home, she found it to be “very castle-y, in almost an over-the-top kind of way,” she says. The stone structure was handsome and stately on the outside, but indoors, the rooms were shrouded in dark colors, heavy fabrics, and Gothic details. Even so, Deshe—the founder and CEO of Simply Framed, an online custom framing company—loved the historical architecture and the large property. “Plus, having a ton of wall space was fun because I could collect and collect [art] and still have walls to fill,” she says. With a little help, Deshe knew, she could transform the house into something bright and sophisticated, with room for her growing family and her artwork.

On a mission to find help, Deshe and her mother took Los Angeles–based design firm Atelier AM’s book—full of photos of a home similiar to the one Deshe envisioned—and headed to the Denver Design District to ask which local interior designer could deliver such a look. “In Kneedler Fauchère, someone told me, ‘Call Kirsten Brundage,’ so I did,” Deshe says. “We met that day and hit it off.” 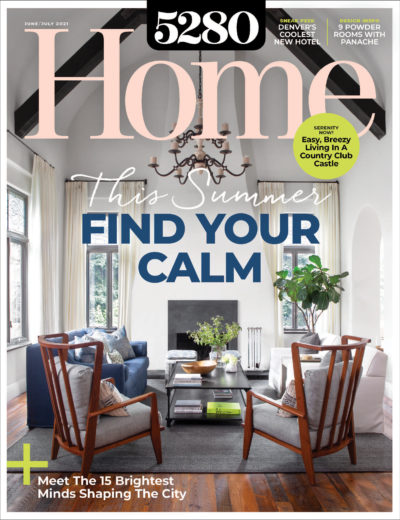 Deshe had already begun peeling back the evidence of an early 2000s renovation: She removed window mullions to let in more light and pulled up wall-to-wall carpet in the living room, which revealed 12-by-12-inch pink marble tiles. She covered that dated flooring with barnwood from Reclaimed DesignWorks that matched the original floors throughout the rest of the main level.

Then Brundage stepped in and chose furnishings that “get better with time,” she says, and high-quality textured fabrics including silks and heathered linens in muted tones. In the great room, for example, where the old stone fireplace surround was transformed into an elegant, ceiling-height monolith, Brundage opted for a clean-lined Cisco Home sofa in Mokum fabric and a pair of Michael S. Smith wood-frame chairs upholstered in a durable Perennials fabric. Similarly, a vintage console in Deshe’s office is a grounding counterpoint to her gallery wall and sleek Room & Board desk. “We picked pieces to make the house feel more youthful and to balance the weight of the architecture,” Brundage explains.

Against the backdrop of this easy elegance, Deshe’s art collection is especially compelling. She has always been drawn to art, she says, and the idea for Simply Framed came because she found framing artworks frustrating. “I’ve tried it all: high-end custom framing shops, Ikea, getting custom mats cut for Ikea frames,” she says. Her work at several web-based businesses, including 20×200.com and Facebook, combined with this desire to collect and hang art she loves, led to a years-long brainstorm: “I was looking at businesses that take complex shopping experiences—like buying eyeglasses or a bra—and make them very simple,” she says. “I thought there was an opportunity in custom framing. I wanted Simply Framed to be like your best friend with great taste who knows how to help you get your art framed.” In 2013, that metaphorical best friend was born.

It’s no surprise, given her profession, that Deshe’s home is full of beautiful artworks. Some pieces are originals—she has works by Ethan Cook and William Powhida—and some are less conventional: She framed a tea towel by Alex Katz and a “doodle drawing” by her then-2-year-old son. “We had a piece of paper sitting on a Fisher-Price play table and every day, he’d draw on it,” she says. “Friends would come and scribble on it. In the end, I loved it so much, I wanted it hanging in our home.”

Deshe moves her artworks around her home as she feels inspired—or as she gets new pieces. Her renovated spaces make it easy to switch things up, but, she says, she doesn’t worry too much about coordinating her art. “You can think about art as decoration, but I think it’s a lot more fun and more meaningful to think about it as a collection grown over time. It’s not just for your current place. It’s something you want to live with irrespective of the space.”