In-flight stroopwafels and paltry packages of pretzels won’t sustain you. Thankfully, several local restaurants, as well as some beloved chains, have added outposts at Denver International Airport, so you can properly fuel up before you take flight. The newest arrivals this summer are Shake Shack, Snooze, and Atlanta-based SweetWater Brewing Company. But more restaurants are coming soon: Voodoo Doughnut and Big Red F concepts’ Jax Fish House & Oyster Bar and the Post Chicken & Beer are all in the queue.

Ready for a concourse food crawl? Here are the best places to eat and snack at Denver International Airport, ranked by deliciousness.

Airports are full of fast-food chains—but some of those chains are loved far more than others (see: the lines at Chick-fil-A on the B concourse rival those at security). Now fan-favorite Shake Shack joins the mix. The New York fast-casual burger chain made its DIA debut this month, serving crinkle-cut fries, angus burgers, and thick, creamy shakes to hungry travelers. B Gates, Center Core, Mezzanine Level

Wine and cheese is an ideal way to kick off any vacation. For a cosmopolitan afternoon snack, head to Crú Food and Wine and order the Around the World Cheese Flight, which comes loaded with rustic bread, honey, jams, and cheeses like zesty manchego from Spain and creamy goat cheese from California. Near Gate B51 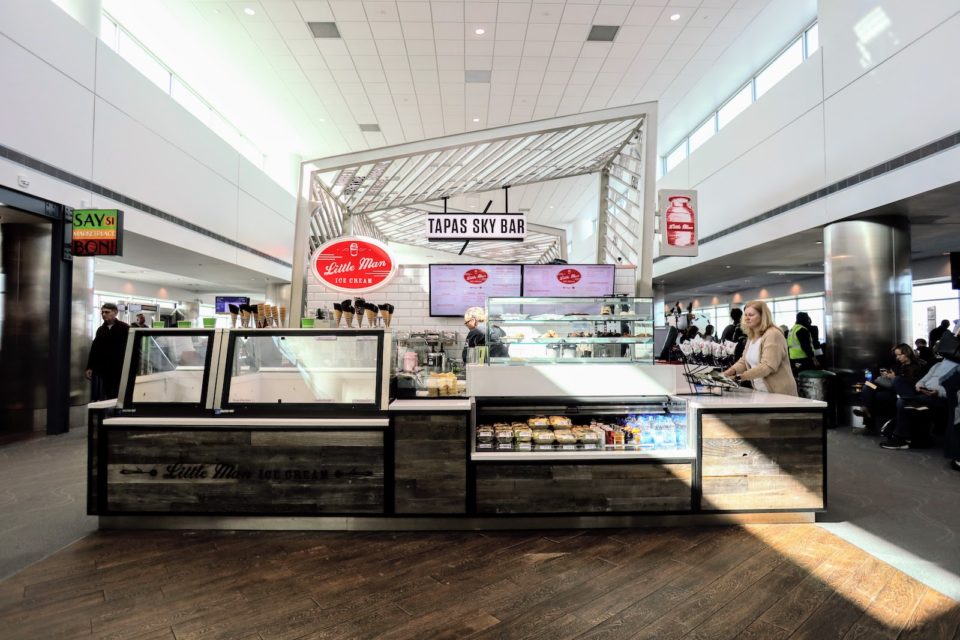 The menu at Steve’s Snappin’ Dogs is a geography lesson through the lens of hot dogs, which includes the dragged-through-the-garden Chicago dog and a Dallas dog smothered with chili con carne. Round out your lunch with sweet potato tots. Near Gate B24

This Boulder-born shop that’s won over sandwich lovers across the Front Range with its fresh-baked bread now has more than 20 locations, including one inside DIA. Snarf’s staples range from an Italian sandwich loaded with meats and cheeses to a vegetarian sammie stuffed with artichokes and feta. Near Gate A73

Most importantly, Root Down has a fantastic veggie-forward menu that’s peppered with globally inspired dishes like banh mi turkey burgers and vegetarian shoyu ramen. But this funky Denver restaurant didn’t take any shortcuts on its design when it added a DIA location. Those waiting for their flights can take a seat at reclaimed butcher block tables surrounded by travel-inspired decor like hanging globes and mini metal airplanes on the walls. C Gates, Center Core

One of the most underrated spots in the airport is Tamales by La Casita. This no-frills Highlands institution has a DIA location, selling Frito pies, green-chile-smothered tamales and burritos as well as affordable margaritas (especially by airport standards). C Gates, Center Core

Denver Central Market opened a petite food hall in DIA, which provides the perfect solution for when you’re traveling with a group and everyone has different cravings. Culture Meat & Cheese, Sushi-Rama, Vero Italian, and more can all be found here. Near Gate A48

Enjoy a preflight pancake flight at Snooze with choices like pineapple upside down, blueberry Danish, and sweet potato. Or, take your tastebuds on the savory route with a Smashed Avocado Benny layered with poached eggs, tomatoes, and smoked cheddar hollandaise. The iconic Denver-born breakfast chain known for commanding long wait lists opened its DIA outpost in June with a sprawling 30-seat bar. Concourse B

Travelers passing through Denver can get a quick introduction to our city’s renowned craft beer scene by taking a seat at Great Divide and ordering a pint of Hazy IPA or Yeti Imperial Stout. If you live here, it’s a little taste of home. But not only are there lots of tasty beers on tap, the hometown brewery serves delightfully beer-centric menu items like French toast with a dark stout mascarpone and ale-battered fish and chips. Near Gate C32