If you logged onto Instagram in early spring 2021, you might have spotted a video of a pregnant Cait Pappas and her husband, Jason, standing in the garage of their suburban Arvada home, surrounded by enormous cardboard boxes. These contained custom kitchen cabinets that Cait designed and ordered from online retailer Cliq Studios, and the couple was giddy about them. They jokingly debated the terms of the damage-return policy (neither could remember the timeframe the company gave them) when suddenly they heard a clatter in a corner of the garage where their then-2-year-old son, Joe, was playing. There was laughter (Joe was fine; the cabinets were fine), and the video ended.

This is one example of the controlled chaos associated with home renovations—particularly the DIY kind. And for Cait, a seventh-grade teacher turned interior decorator, Instagram influencer, and DIY design blogger (known online as @Nest.Out.West and @CaitPappas), documenting that chaos is part of the design process. Cait’s 80,000-plus Instagram followers are invested: They’ve been watching over the last three years as she and Jason, a self-taught builder, have transformed the unremarkable yellow-pine-, black-granite-, and beige-carpet-clad interior of their 1990s fixer-upper into the photo-ready dream house it is today, and they’ve even weighed in on some design choices (voting for the kitchen’s brass drawer pulls from Rejuvenation in an online poll, for example). 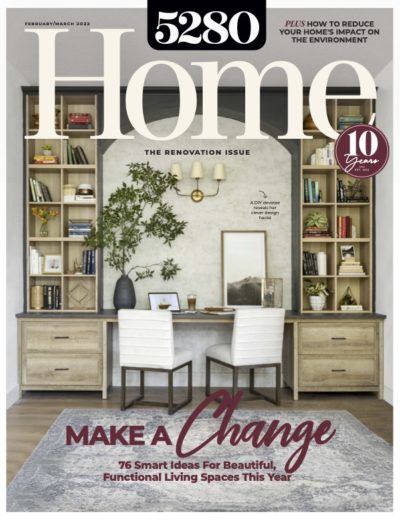 “Jason and I are very hands-on people, mostly because we’re also incredibly frugal people,” Cait says. “We both grew up in families where our parents did all of their house projects themselves, so it was a bit foreign for us to pay someone to do something we could tackle ourselves with enough research and planning. Most of our knowledge came from our dads and YouTube, to be honest.” Though she admits there are a few things she always hires subcontractors for: “drywall finishing, electrical that requires a licensed electrician, and paint, when it’s a ceiling or more than just a little bedroom.” Other than that, this renovation is a product of the Pappases’ sweat equity. “We’ve pretty much spent 90 percent of our weekends working on our house since moving here,” the designer says.

The week the family moved in, they ripped out wall-to-wall beige carpeting to make way for wide-plank French-oak floors. Since then, they’ve reimagined the function of certain spaces, like the barely used formal dining room, which they transformed into an open-concept office (after reserving some of the space for a larger laundry room). An old office became a cozy music room, where Jason, an accomplished musician, can play music and the couple’s two kids can dance to bluegrass records. The ultra-1990s main bathroom got a freestanding bathtub (in lieu of the old alcove tub) and elegant teak double vanity with brass finishes. And the all-pine kitchen received a well-dressed makeover.

There is something universally appealing about the mix of neutral organic materials, white walls, and metal accents that define Cait’s family-friendly design aesthetic. “I’d describe it as sort of cottagey, but with a definite modern-minimalist spin,” she says. “Looking deeper, some rooms have perhaps a more Scandi vibe, while others might have a more art deco feel to them.” She says she’s “loath to cut and paste” a look from the internet into her own home (or the homes of her design clients), but she does turn to fellow online designers for jolts of inspiration, including Shea McGee of Studio McGee, Joanna Gaines of Magnolia, and Shelby Girard of Denver’s Havenly.

In turn, Cait’s followers look to her for design ideas and guidance. “My best advice for an aspiring DIYer is to trust yourself and go with your gut,” says the designer, whose online persona is the picture of confidence. But also, “Ask lots of questions, and do your research,” she adds. “We’ve learned a lot through trial and error.”