When the eventual homeowners first laid eyes on this then-overgrown, 1920s Spanish Colonial in Denver Country Club, they had visions of restoring the house to its former glory. They’d strip away incongruous 1970s-era additions and reintroduce Moorish finishes and fixtures. Architect Carlos Alvarez had another idea.

Alvarez, founder of Denver- and Bilbao, Spain–based AlvarezMorris Architectural Studio, believed that a run-of-the-mill restoration wouldn’t cut it. “In America, people often want to make their home look like an old home—a Tudor, a Colonial—while in Europe, the approach with architecture tends to be much more honest with the time,” he says. “Europeans don’t shy away from giving 15th-century buildings supermodern interiors. With this project, we decided to take a softer version of that European approach, leaving the exterior intact and then building a modern mirror image of it with an addition.”

Welcome to the next wave of historic restoration, an approach that marries a home’s history with contemporary design ideas to create a space that feels both fresh and storied. In this case, Alvarez and his wife and business partner, Carolyn Morris, an interior designer, worked to meld the home’s Spanish Colonial–style with modern materials, floor plans, and finishes. The result reveals and restores the original home’s bones but contrasts them with right-angled, steel-structured additions and contemporary interiors.

In the living room, the design team removed heavy, textured plaster from the walls and refinished the red-stained floors in ebony, creating a high-contrast envelope that adds a modern vibe to the existing wooden beams and Mediterranean-rustic pendant lights.

The team relocated the kitchen to the true heart of the home, where it unites the original house and the 1,200-square-foot addition. “Because it’s literally the intersection between the old and the new, it’s about as modern as it can be,” Alvarez says. Bulthaup cabinets—synonymous with modern European efficiency—complement the Carrera-topped island, constructed with waterfall edges to highlight its angularity. And on the floors in the kitchen, Alvarez and his team laid concrete tiles. While they look modern, the tiles actually hail from historic Spanish homes, so “they unify the old and the new,” the architect says.

The kitchen’s floor-to-ceiling glass doors open to the backyard, creating an easy indoor-outdoor vibe that is as fitting for Colorado as it would be on the Spanish Mediterranean coast. In the courtyard, a 16-foot-long dining table is a perfect reason to dine alfresco; it’s a study in streamlined simplicity that’s echoed in the courtyard’s steel-framed pergolas and slat-fenced walls.

“In each space of the house, one style has to be more powerful than the other,” Alvarez says. “In the front of the house, the old style is stronger and the modern aspects are minimal, serving as kind of the stitching to tie the design together. In the courtyard, all of the details are steel and it’s 75 percent modern, 25 percent Colonial. The Colonial is the backdrop.”

And that was the key to modernizing this historic home, Alvarez says: The old and the new couldn’t be evenly weighted. Instead, they were woven together, with elements of one bringing substance to the other. If done right, Alvarez says, “taking something old and bringing modern life to it—the contrast of the two ideas—can make both better.” 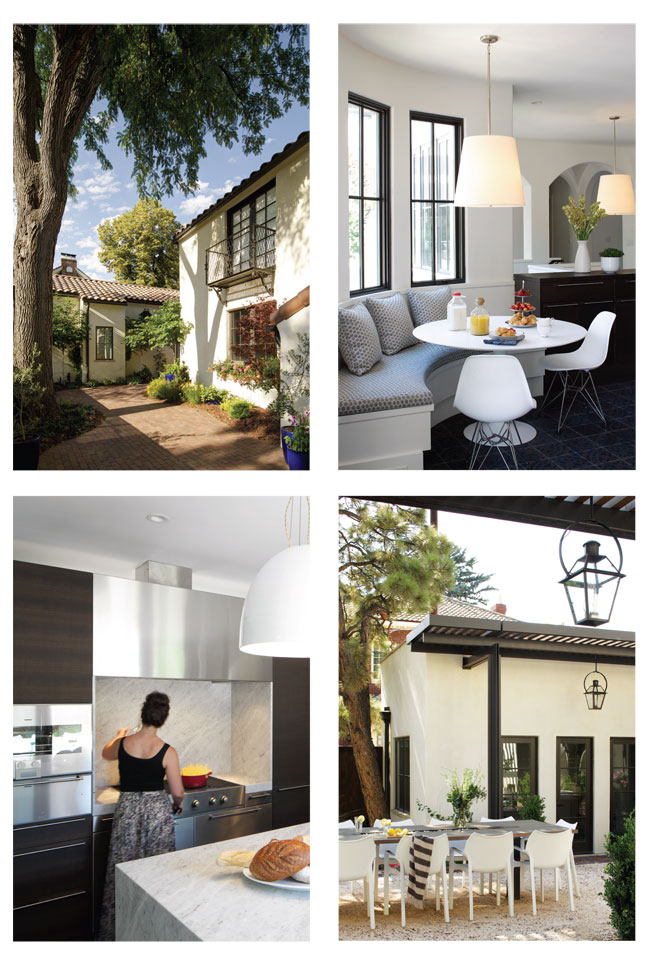 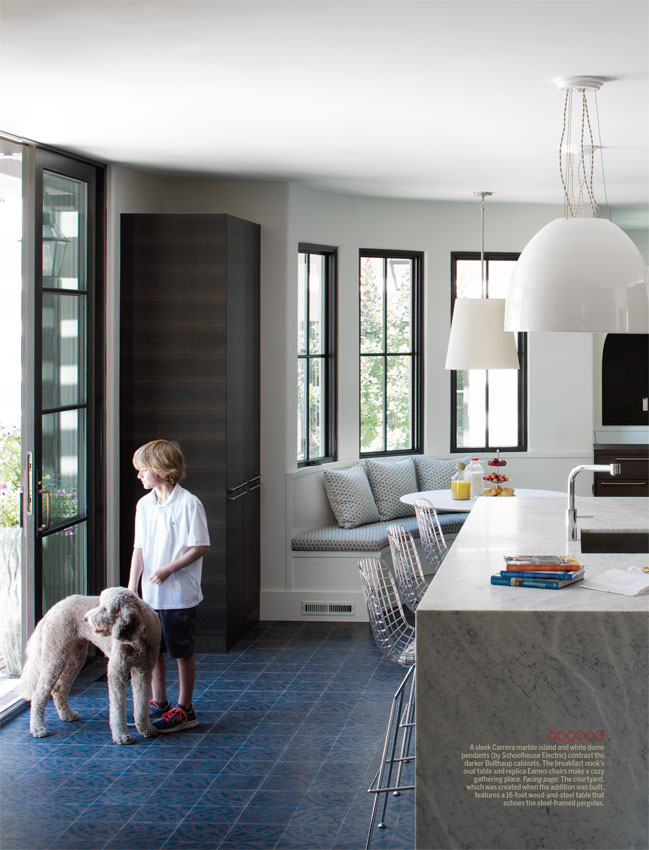 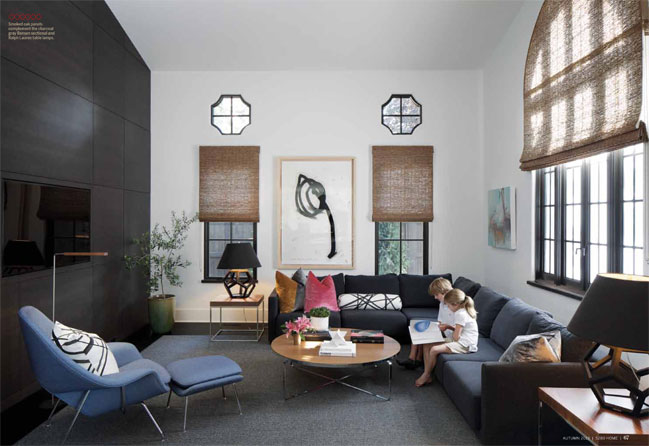 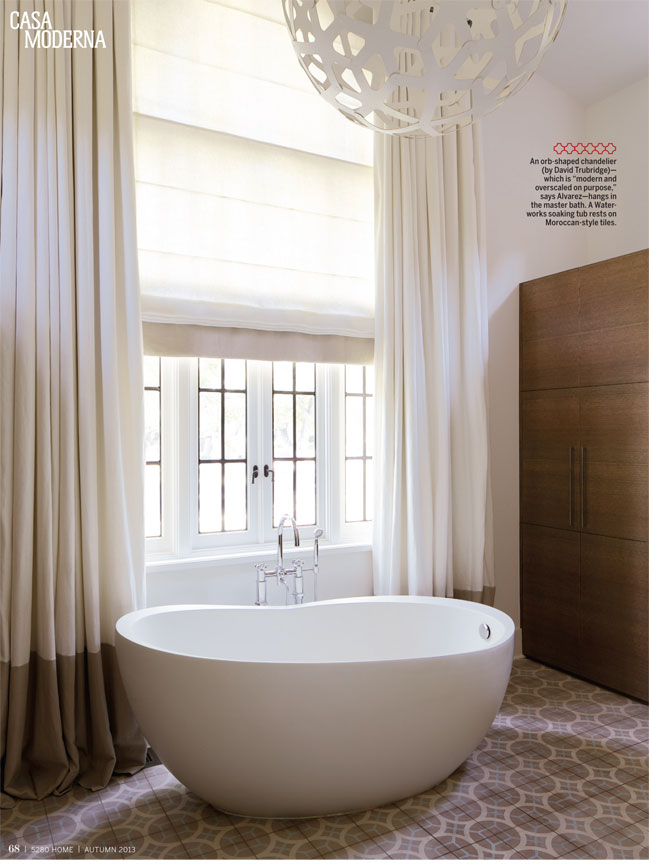 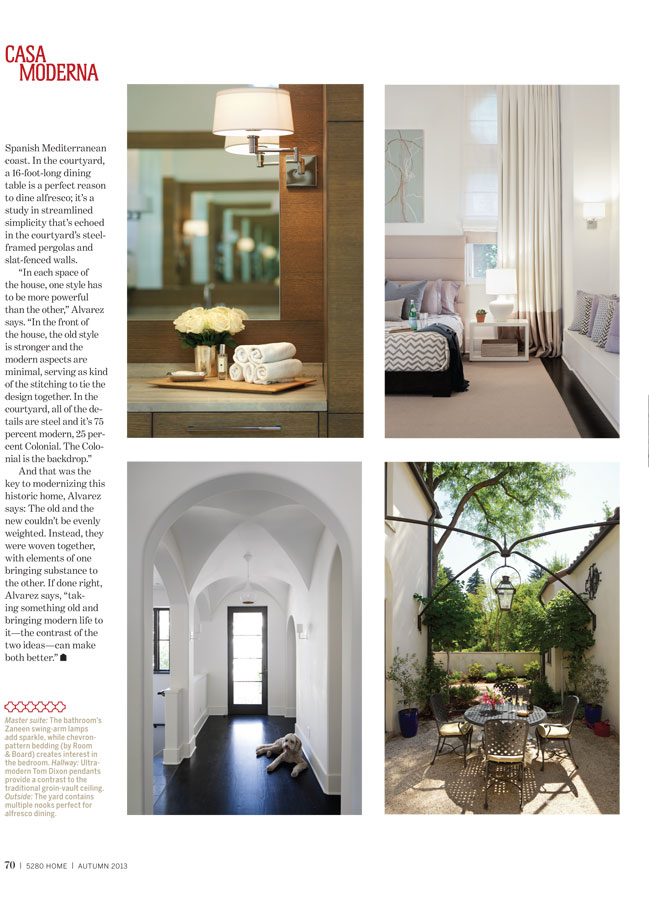