Sullivan is no stranger to making people feel at home. She’s co-owned and operated some of the most successful restaurants in Denver—including TAG and TAG Raw Bar—and now, as the principal of Leigh Sullivan Enterprises, she oversees branding and marketing for many of the biggest names in the local hospitality scene. But when it came to revamping a 1920 Congress Park bungalow for Sullivan and her husband’s newly blended family of three kids and three dogs, even Sullivan needed a little assist. “Leigh’s kind of a tiny blond bombshell, but she’s also tough as nails,” says her friend and designer Sasha Moinzad. “I’m glad we got to make her home fun and feminine, but with some of it tough and edgy—because that’s her.”

Sasha and her brother John Moinzad, who together make up design firm Thorn & French, were tasked with marrying bursts of retro glam with quirky and irreverent cultural references and objects. As the daughter of a collector (whom she lovingly calls “a high-end hoarder,”), Sullivan came to the project with a few distinctive pieces she wanted featured in the home: ornate antique mirrors and a long Chippendale dining table that had been her father’s and a tall Buddha statue from one of her former restaurants. “All the objects had to have meaning to me,” Sullivan says of her selections. “My husband and I have known each other for a long time, and we’re bringing our homes together here, so I wanted to find a way to make the uniqueness of the furniture and everything else work together—kind of like our family.”

Custom benches—built by another Moinzad brother, Armand—flank the fireplace, whose mantle showcases a painting (by Centennial-based artist James Thorpe) that was a 40th birthday gift to homeowner Leigh Sullivan from her father. The large ottoman, from the Sullivan family collection, was reupholstered by Tom’s Upholstering in Morrison. Above right: Sullivan and her husband, Travis, with their dog Tag. 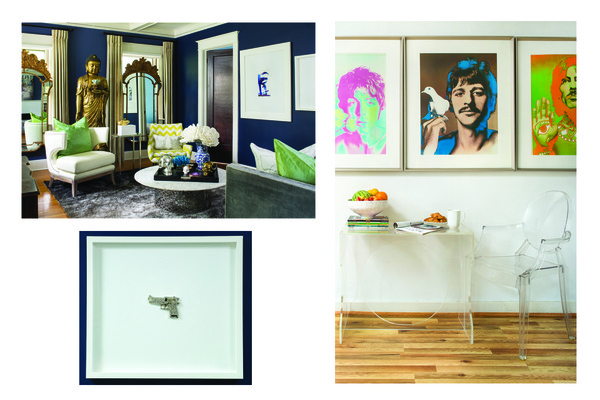 It may be unusual for designers to build rooms around accents, but the Moinzads were up for the challenge. “We took all the staples Leigh had and then added the lipstick and rouge,” Sasha says. In the living room, deep navy paint (a custom tint) complements grays in the Popcows shag rug and Jonathan Adler couch. The designers tossed lime green pillows on the club chairs and hung an abstract painting next to a gun-shaped belt buckle bedazzled in rhinestones—both custom-framed.

Philippe Starck’s Louis Ghost Chair (by Kartell) sits next to a Lucite table Sullivan bought from an antique store years ago—it’s estimated to be from the 1970s. Sullivan is an avid Beatles fan, and the photos on the wall were a gift from her father. 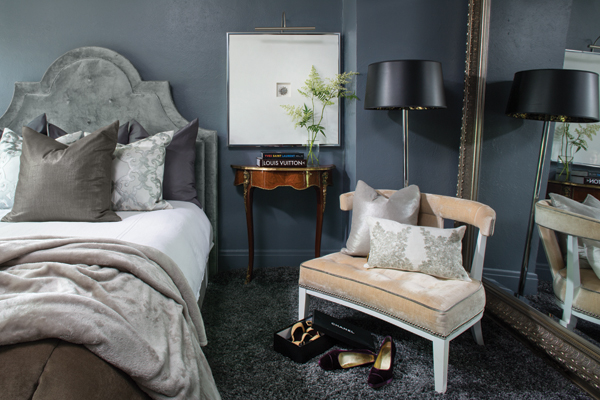 The most personal room of the house is glamorous with lush fabrics and deep tones. The walls’ rich color (Benjamin Moore’s Wolf Gray) is a mid-range hue that finds lighter and darker contrasts in the custom bedding. A combination of textures on the bed, including the chenille duvet and custom champagne silk pillow shams, gives the scheme depth and interest. In keeping with the theme of distinctive pieces, the Moinzads hung framed antique brooches on either side of the bed. 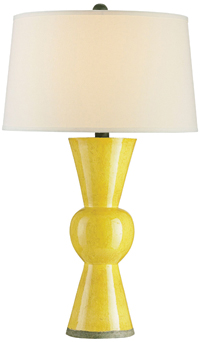 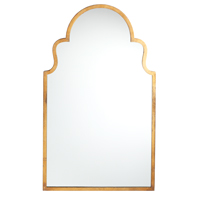 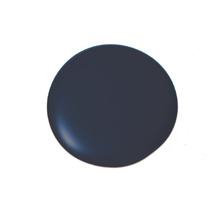 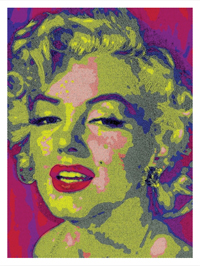