The momentum has been building in Colorado Springs for years now, and not even the pandemic could slow it down. The entrepreneurial spirit is clearly alive: in 2021 alone, a record 38 street-level businesses opened downtown, bringing in new ideas, fresh concepts, and a welcoming crop of young business owners. But perhaps more important, the city’s renewed culture is now coalescing around that growth, inviting people from all walks of life to join in. Whether you’re an early bird or a night owl, a live music lover or a patron of local galleries and shops, the Springs has something new for you.

“We want to create a vibe,” says Matt Baumgartner, purveyor of alleyway cocktail bar Shame and Regret and a native of the Springs. “With the growth of the community lately, we’re also growing our knowledge and education; we’re meeting people and exploring cultures.”

That vibe Baumgartner talks about can be felt across downtown these days, whether at an up-and-coming comedy club, a speakeasy-style lounge, or at a bevy of new dining spots and boutiques. While the entire downtown district is walkable and bikeable, there’s so much to see you’ll likely need a couple days to take it all in. So, here are the highlights to help you create an itinerary for a weekend away in Olympic City USA. 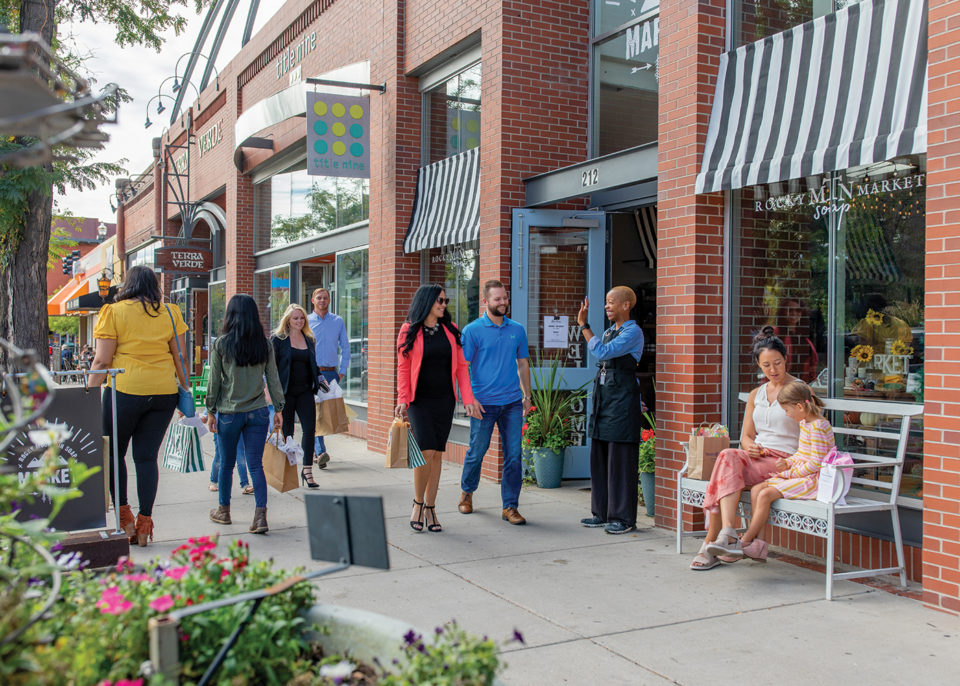 Any hour of the day, downtown Colorado Springs is humming. A few of the newest businesses, including Epiphany—which brands itself as a cafe, a bar, a restaurant, and a jazz music venue—epitomize the city’s around-the-clock buzz. A second-floor joint on Tejon Street with a large performance area, Epiphany opened in November 2021 and built its business around an “all-day” model. At 8 a.m. on a Saturday morning, you might find yourself participating in a boozy Zumba brunch; at lunch you can snack on diverse offerings like baked plantains, and by nightfall, you can return and find the place transformed into a jazz or salsa club.

“We’re committed to and focused on the idea of ‘both—and’. We’ve steered away from trying to identify ourselves as a restaurant, or a bar, or a coffee shop. We’re all of those things,” says managing partner Mandy Todd. “It’s a community gathering space that brings people, ideas, and experiences together.” 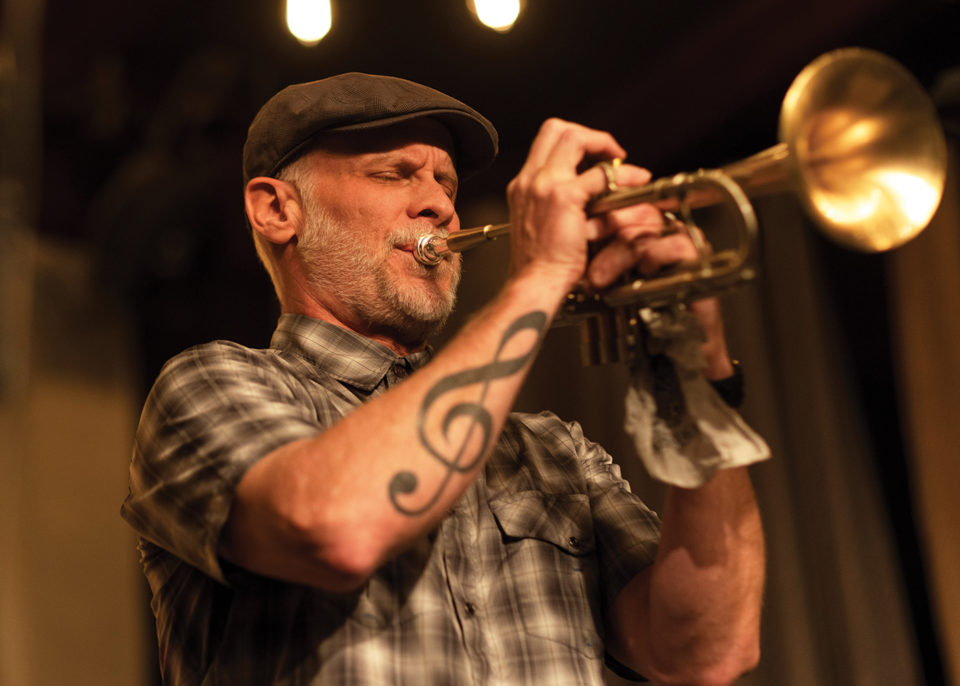 One part food hall, one part philanthropic collective, the newly-opened The Well houses four food concepts plus a bar, coffee shop and outdoor patio with great views. The idea is novel: While one half of the building is dedicated to food and beverage service, the money generated by The Well’s coffee shop and bar—Gift Horse—goes back to the adjoining philanthropic collective of 10 nonprofit funders next door. This effort to build an even stronger community means part of enjoying good food and drink is giving back to the community. 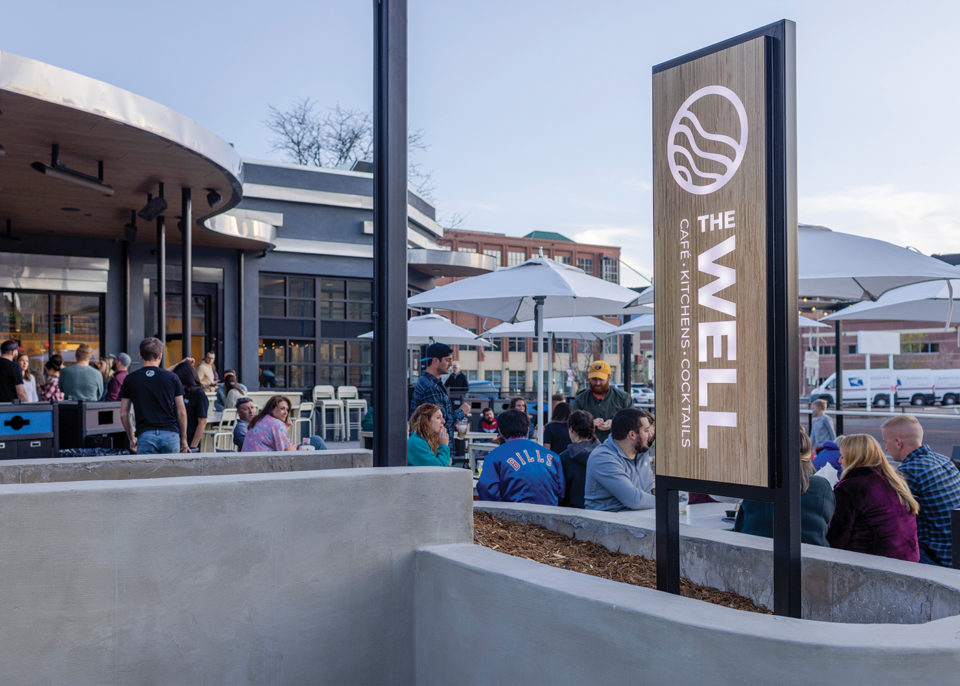 If you really want to see the Springs like a local, you’ll need to get off the beaten path when the sun goes down. In fact, you’ll want to abandon the main drags altogether and take a stroll down the alley between E. Platte Avenue and E. Bijou Street, behind the storefronts on Tejon Street. Keep your eyes peeled and you’ll find a black door with “D11” painted in small red font, beckoning to wanderers who want to go back in time. Open that door, and you’ll feel like Jay Gatsby walking into a 1920s-era speakeasy. It’s an intimate space, but District e11even makes the most of it with several booths, a small side room, and a bartop in the main room where a team of pros—dressed to the nines—are all mixing an array of exciting cocktails and grooving to the bass-infused jazz music. Looking to escape from the woes of the world for a moment? Track down that nondescript entrance and enjoy one of the best cocktail menus around.

Once you’ve filled your cup at District e11even, wander down the alley one block south, where you’ll find the more obvious entrance to Shame and Regret, Matt Baumgartner’s take on the modern-day speakeasy. The big neon sign—it’s one of the most photographed in the city—directs patrons through the alleyway door into a main room filled with busy bartenders working one of the city’s largest menus of scotch, American whiskey, and sweet liquors. While sipping cocktails, patrons admire oil paintings by local artist Brett Andrus as they settle into booths and barstools. Shame and Regret, which opened in 2019, revived the space that once housed 15C, an older speakeasy that kept irregular hours and ultimately shut down. “We wanted to really re-establish the place as a go-to spot,” Baumgartner says. “The basis of our concept is to have great customer service, great staff, and really talented bartenders.

Though it’s not in an alleyway, Brooklyn’s On Boulder is easy to miss. That’s because, unless you’re looped in on the secret, you’d think it’s really just a “fine haberdashery” as the sign on the front door indicates. Walk through that door, though, and you’ll notice a few suits hanging on the wall. Nothing to see, right? Wrong. Press the button on the wall and wait for the “employees only” door to open—then follow the hostess into a charming barroom with a gin-focused menu and talented staff.

You won’t know quite what to expect when you walk into Allusion Speakeasy, and that’s pretty much the point. Located behind a brick wall within Rooster’s House of Ramen, the cocktail bar operates with a “revolving popup concept,” meaning its theme changes every few months—as does the menu and decor. Allusion recently donned a Harry Potter theme featuring a “Polyjuice Potion,” but by time you get there, who knows where they’ll have taken things.

If you’re looking for an even more upscale escape, stop by Cork & Cask, a sophisticated whiskey and wine bar, a few blocks south of the others and well worth the walk. The brainchild of business partners Lucas Frye and Joe Campana, Cork & Cask boasts plush velvet seating, a gothic theme, and a refined food menu, in addition to the wide-ranging cocktail list. It’s not a speakeasy, but if you’re looking for pre-dinner drinks or a nightcap, it’s worth a visit.

Find any location mentioned in this article in the map below.

While the Springs has long had a reputation as a military town, the growth of the downtown district indicates the city may be known for a whole lot more in the years to come. Eric Phillips, owner of 3E’s Comedy Club, knows about that transformation. He first came to Colorado Springs in the late ‘80s when he was in the Army; he returned a decade later and has called the city home for the past 20 years. When he first returned, he says, the city didn’t have much to capture outsiders’ attention. But as new bars, food halls, and hotels have opened over the past few years, he’s recognized the change—and that’s why he capitalized on a concept he’s had in mind for years. He opened 3E’s amidst the pandemic in an effort to bring big-time headliners into the heart of downtown. While the club’s popularity is still growing, he plans to make a splash this fall when he organizes the Colorado Springs First-Annual Comedy Festival, bringing nationally renowned comedians to locales all across the city the third week of October.

Everything will be within walking distance when you book a room at any one of the trendy new hotels downtown. Kinship Landing, which opened in early 2021, is a de facto trailhead for downtown recreation, welcoming any kind of traveler in its mixed-concept rooms. Moreover, a new Hyatt Place opened in November 2021, and the SpringHill Suites and Element by Marriott will open its doors—and rooftop restaurant—in June 2022.

The culture shift can also be seen at the many art galleries throughout downtown, which is a state Certified Creative District. Among the standouts, Kreuser Gallery is operated by Abigail Kreuser, who has lived in the Springs for nearly 40 years and has curated hundreds of exhibitions throughout the region. Her gallery features a variety of works, including paintings, pottery, jewelry and more. The neighboring gallery, G44, is not only another woman-owned business, but an example of the topflight artistry the region has to offer. Gundega Stevens, who grew up in the Springs and founded G44, has also curated countless shows, elevated the profile of local artists, and helped put the city on the map as a destination for art lovers. If you want to get a fuller taste of the thriving art scene, visit on the First Friday of any month to see unveilings of new art and enjoy live music.

While you’re exploring the galleries, it’s worth also popping into a few of the shops that have been staples in Colorado Springs for decades. Terra Verde, which opened 30 years ago, has a wide inventory of women’s clothing, jewelry, home goods and other gifts. If you’re looking for books, gifts and toys, or a glimpse into the city’s history, you can’t miss Poor Richard’s, which has been operating in the Springs as a bookstore and cafe since 1975. Or perhaps your kitchenware needs a refresh. Sparrow Hawk Gourmet Cookware is the largest distributor of Le Creuset west of the Mississippi River. 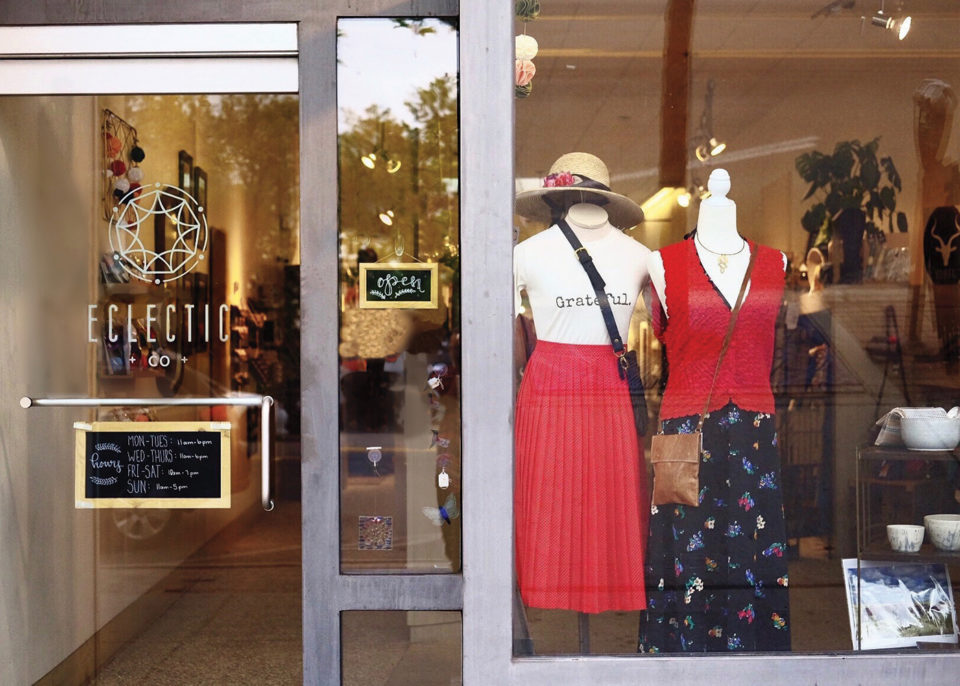 In addition to the mainstays, a few new shops are making waves in the downtown shopping corridor. Eclectic CO., a women-owned business that began as a holiday pop-up concept several years ago, has grown into a co-op-style retail space where you can find sustainable handmade goods, greeting cards, as well as apparel and art from local makers. If it’s new threads you’re looking for, swing by The Local Honey Collective, which was founded by close friends in 2019 and is now an affordable women’s clothing boutique in the heart of downtown. There’s also plenty for men at INHERENT Clothier, a premier suit tailor that launched amidst the pandemic and not only helps men look the part, but helps them focus on mental wellness while they’re at it.

One of the biggest downtown developments over the past few years was the construction of Weidner Field, home of the Switchbacks FC soccer team. The grand opening was in May 2021, and this summer features a packed schedule of affordable soccer games, concerts, and other family-friendly events.

The revitalized downtown isn’t only about shopping and a diverse bar scene. In fact, there are several cultural institutions within walking distance that chart the city’s evolution—including the free Colorado Springs Pioneers Museum and the U.S. Olympic & Paralympic Museum, which has become a top attraction since it opened in 2020. New to the lineup this year is the Rocky Mountain Motorcycle Museum, which relocated into the second floor of the mixed-used Tejon Eatery building. If you’re interested in classic machines and the history of motorcycles, stop by and enjoy a bite to eat at one of the adjacent restaurants.

Check out some of our partners.

Want more? Check out the June issue of 5280 for the full article.