Step through Amory Lovins’ front door and 36 stuffed orangutans stare down at you from the walls. They’re here for the food.

“We’ve harvested 26 banana crops in this space,” Lovins tells me, waving at the indoor garden adjacent to his 4,000-square-foot, passive-solar home and office in Old Snowmass, which doubles as the headquarters for the Rocky Mountain Institute. 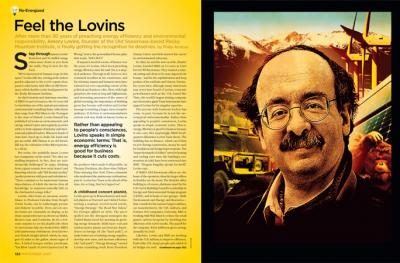 As chief scientist and chairman emeritus of RMI’s board of trustees, the 60-year-old Lovins helms one of the nation’s preeminent environmental consulting firms, with clients that range from Wal-Mart to the Pentagon to the state of Hawaii. Lovins himself has published 29 books on environmental- and energy-related topics and regularly provides advice to both captains of industry and international political leaders. Nineteen heads of state have lined up to shake his hand and get an earful. Bill Clinton is an old friend. Bill Joy, the cofounder of Sun Microsystems, is a client.

But today, the painfully smart Lovins has orangutans on the mind. “Yes, they are stuffing-impaired. In fact, they are taxidermically challenged,” he quips, drinking from a giant ceramic beer stein (water) and flaunting what he calls “full frontal nerdity” (pocket protector with pens and calculators). “There continue to be mysterious banana depredations, of which the interns deny all knowledge, so suspicion naturally falls on the forehanded orange folks.”

Lovins, who bears an uncanny resemblance to Professor Calculus from Hergé’s Tintin books, can be witheringly precise and didactic in public. Even one-on-one, his brains are constantly on display, as he drops casual references as diverse as NASA, Moore’s Law, and Confucius. So it’s a welcome surprise to see his playful side when we meet in late July, two weeks before RMI’s 25th anniversary celebrations. Even his two-seat Honda Insight hybrid, which, he says, gets 65 miles to the gallon, shows signs of fun: A faded bumper sticker proclaims, “Eat More Lamb! 50,000 Coyotes Can’t Be Wrong,” next to the personalized license plate that reads, “IGO-ECO.”

If anyone’s needed a sense of humor over the years, it’s Lovins, who’s been preaching energy efficiency since the mid ’70s to a skeptical audience. Through it all, however, he’s remained steadfast in his convictions, and his visionary smarts and business savvy have nurtured an ever-expanding coterie of the political and business elite. Now, with high gas prices, the wars in Iraq and Afghanistan, and increasing awareness of the causes of global warming, the importance of thinking green has become self-evident and Lovins’ message is reaching a larger, more receptive audience. If Al Gore is environmentalism’s current rock star, think of Amory Lovins as the producer who’s made it all possible. As Thomas Friedman, the three-time Pulitzer Prize-winning New York Times columnist who moderated the anniversary celebrations, puts it, Lovins has “been so far ahead of his time, for so long, that he’s lapped us.”

A childhood concert pianist, Lovins grew up in Massachusetts and studied physics at Harvard and Oxford before writing a seminal, 10,000-word article, “Energy Strategy: The Road Not Taken,” for Foreign Affairs in 1976. The piece spelled out the divergent strategies the United States faced for meeting its growing energy demands: Build more coal and nuclear-power plants and increase dependence on foreign oil (the “hard path”), or make better use of existing energy supplies, develop new ones, and increase efficiency (the “soft path”). “Energy Strategy” earned Lovins consulting work from President Jimmy Carter and kick-started his career in environmental advocacy.

In 1982, he and his now ex-wife, Hunter Lovins, founded RMI on 3.5 acres at 7,100 feet in Old Snowmass. They wanted a natural setting and chose to be near Aspen for its beauty—and for the sophistication and deep pockets of its residents and visitors. Twenty-five years later, although many Americans may never have heard of Lovins, economic powerhouses such as the U.K.-based Rio Tinto, the world’s largest mining company, and electronics-giant Texas Instruments have tapped Lovins for his singular expertise.

His success with business leaders has come, in part, because he is not the stereotypical environmentalist. Rather than appealing to people’s consciences, Lovins speaks in simple economic terms: That is, energy efficiency is good for business because it cuts costs. Not surprisingly, RMI’s headquarters illustrates Lovins’ basic thesis. The building has no furnace, which saved him $1,200 during construction, money he used for insulation and design improvements. The “many thousands of dollars” saved in heating and cooling costs since the building’s construction in 1982 have been reinvested into RMI. “Elegant frugality speaks for itself,” Lovins says.

If RMI’s Old Snowmass offices are the heart of the operation, then the larger offices in Boulder are the head. The Boulder office building is, of course, platinum-rated by the U.S. Green Building Council’s Leadership in Energy and Environmental Design program (LEED), and is home to two groups—Built Environment and Energy and Resources—that consult for the nation’s largest utilities, car manufacturers, the U.S. military, and Fortune 500 companies. Currently, RMI is working with Wal-Mart to reduce the retail giant’s carbon footprint by doubling the efficiency of its 6,800 trucks. The payoff for the company: $494 million in gross savings annually by 2020.

Likewise, Lovins and RMI are working with the U.S. military to improve efficiency. Half of the U.S. Army’s people and a third of its budget are used for logistics, which account for 50 percent of the Army’s casualties. “The American people are paying very dearly in both blood and treasure for the inefficiency of military platforms,” Lovins told me, noting that gas-guzzling armored vehicles get 1.5 miles to the gallon. “The Pentagon is eager to address this.”

Understatement notwithstanding, it’s clear Lovins wants to solve the military’s problem, too. But his ambitions are much broader. His larger agenda includes improving national security by reducing dependence on foreign oil—and oil in general, for that matter—and reducing greenhouse gasses. His 2004 book, Winning the Oil Endgame, doubles as a road map for getting the country off foreign oil by 2025, using oil twice as efficiently as we do now, and then substituting biofuels, saved natural gas, and hydrogen. The world currently uses about one cubic mile of oil per year at the cost of $2 trillion, Lovins says. That doesn’t even take into account the costs of military action and environmental damage needed to secure petroleum. To Lovins’ mind, the solution, in concept at least, is simple: If we decrease demand for oil, we’ll save money, lives, and the environment in the process.

Two weeks from when we first met amid his orangutans, Lovins is standing in for a tardy Bill Clinton, the inaugural speaker of RMI’s Celebrating Solutions symposium at the venerable Hotel Jerome in Aspen.

“I believe in the conservation of mass, and he is surely somewhere in the near universe,” jokes Lovins, eliciting chuckles from the packed room.

The First Husband-in-training, tanned and casual in an open-collared shirt, eventually appears and takes the podium. “Two days before I was to give my first speech about energy policy as president of the United States, I called Amory and asked him what it should be,” says Clinton, who studied with Lovins at Oxford 30 years ago and hired him as a consultant when Clinton was governor of Arkansas. “Mr. Lovins, you have lost a lot of battles since I met you, but you are winning the war.”

Throughout the weekend, Lovins is ever-present, despite his tendency to hide behind his mustache and the myriad facts he can access when speaking. But at the $500-a-plate gala fund-raiser that culminates the 25th anniversary celebrations, Lovins lets his guard down during his closing remarks. Perhaps in frustration at the slow pace of progress, or perhaps in relief and gratitude at the positive consensus that finally seems to be emerging for his ideas, Lovins gets tears in his eyes as he quotes his mentor, Friends of the Earth cofounder David Brower.

“Optimism and pessimism are different sides of the same irresponsible simplistic surrender to fatalism,” he says. “Hope has its sleeves rolled up and is working hard to change the odds.” And, so, as the RMI’s anniversary celebrations come to a close, Lovins does what he does best—rolls up his sleeves and gets back to the important work of saving us from ourselves. m