Can one city, or for that matter one person, make a difference in the great conflict in which we are now engaged: the struggle to achieve energy security and energy independence? I believe the answer is yes. As one of the nation’s renewable-energy centers, Denver is uniquely situated to do what must be done to ensure that future generations of young Americans will not fight Gulf Wars for someone else’s oil. 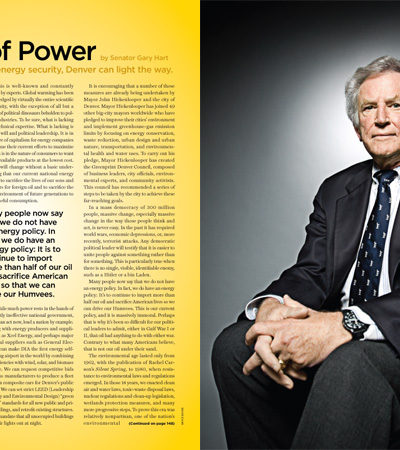 Presently the United States imports 60 percent of its oil, at the annual cost to consumers of some $420 billion. We are borrowing money from the Chinese and Japanese to finance that cost. That money will have to be repaid, with interest, at some date. Meanwhile, a large portion of our military budget is spent protecting and acquiring Middle East oil. If we internalized the costs of that military budget into the costs of gasoline, we would be paying $6 to $8 for a gallon of gas. And that cost does not include more than 30,000 American casualties (wounded and killed) in Iraq.

Only in this recent Congress, after more than 25 years, did we mandate increased fuel-efficiency standards for automobiles sold in the United States. Our government could begin to withdraw subsidies for oil companies and increase subsidies for alternative, renewable fuels such as ethanol from glucose (switch grass, corn, sugar cane, etc.) and biodiesel from animal waste and carcasses. Our policymakers can require automakers to produce much greater numbers of plug-in hybrid cars and mandate the use of carbon composites that are much lighter, and stronger, in automobile bodies and parts. These and other steps can bridge the 25-year gap from here to the age of hydrogen.

All this is well-known and constantly repeated by experts. Global warming has been acknowledged by virtually the entire scientific community, with the exception of all but a handful of political dinosaurs beholden to polluting industries. To be sure, what is lacking is not technical expertise. What is lacking is political will and political leadership. It is in the nature of capitalism for energy companies to continue their current efforts to maximize profits. It is in the nature of consumers to want readily available products at the lowest cost. Neither will change without a basic understanding that our current national energy policy is to sacrifice the lives of our sons and daughters for foreign oil and to sacrifice the global environment of future generations to our wasteful consumption.

But while much power rests in the hands of a presently ineffective national government, Denver can act now, lead a nation by example. Working with energy producers and suppliers, such as Xcel Energy, and perhaps major industrial suppliers such as General Electric, we can make DIA the first energy self-sustaining airport in the world by combining new efficiencies with wind, solar, and biomass methane. We can request competitive bids from auto manufacturers to produce a fleet of carbon composite cars for Denver’s public vehicles. We can set strict LEED (Leadership in Energy and Environmental Design) “green building” standards for all new public and private buildings, and retrofit existing structures. We can mandate that all unoccupied buildings turn their lights out at night.

It is encouraging that a number of these measures are already being undertaken by Mayor John Hickenlooper and the city of Denver. Mayor Hickenlooper has joined 49 other big-city mayors worldwide who have pledged to improve their cities’ environment and implement greenhouse-gas emission limits by focusing on energy conservation, waste reduction, urban design and urban nature, transportation, and environmental health and water uses. To carry out his pledge, Mayor Hickenlooper has created the Greenprint Denver Council, composed of business leaders, city officials, environmental experts, and community activists. This council has recommended a series of steps to be taken by the city to achieve these far-reaching goals.

In a mass democracy of 300 million people, massive change, especially massive change in the way those people think and act, is never easy. In the past it has required world wars, economic depressions, or, more recently, terrorist attacks. Any democratic political leader will testify that it is easier to unite people against something rather than for something. This is particularly true when there is no single, visible, identifiable enemy, such as a Hitler or a bin Laden.

Many people now say that we do not have an energy policy. In fact, we do have an energy policy: It’s to continue to import more than half our oil and sacrifice American lives so we can drive our Humvees. This is our current policy, and it is massively immoral. Perhaps that is why it’s been so difficult for our political leaders to admit, either in Gulf War I or II, that oil had anything to do with either war. Contrary to what many Americans believe, that is not our oil under their sand.

The environmental age lasted only from 1962, with the publication of Rachel Carson’s Silent Spring, to 1980, when resistance to environmental laws and regulations emerged. In those 18 years, we enacted clean air and water laws, toxic-waste disposal laws, nuclear regulations and clean-up legislation, wetlands protection measures, and many more progressive steps. To prove this era was relatively nonpartisan, one of the nation’s environmental leaders was President Richard Nixon, the heir to the party of the great conservationist and preservationist Theodore Roosevelt.

As a young lawyer, I worked for Department of the Interior Secretary Stuart Udall, who, more than any other individual, moved this country from the age of conservation to the environmental age. I have been engaged in energy and environmental issues for more than 40 years. I served on the Senate Environment Committee for 12 years. In two Senate races and a contest for the presidency, I made energy security and environmental issues central to my campaigns. In my presidential campaign I repeatedly warned that, unless we made ourselves secure from Persian Gulf oil we would go to war for it. We have done so twice since then. I cochaired the U.S. Commission on National Security for the 21st century, which made energy security central to 21st-century national security. Some of us have been at these issues for a very long time. The battle never ceases.

Even beyond defeating terrorism, energy security is our most immediate national-security priority. And it is true that both are inextricably linked. While oil lubricates our economy, it drives the engine of terrorism and division. A percentage of the at least $4 billion that we pay to Saudi Arabia for its oil goes directly into Saudi support for Wahabbist madrasas, schools where young children throughout the Arab world are trained in radical fundamentalist Islam and thus made subject to recruitment into jihadist cells preparing to attack America. Wasteful energy practices are financing our own national destruction. Our oil dependency is a much greater danger to the survival of our republic than the entire present furor over immigration.

By our imagination and initiative, Denver can demonstrate to our great nation how things should be, indeed how things must be. There can be no greater service to our country, its economy, and its security in the early 21st century than to light the path toward true energy security and away from dangerous dependence on foreign oil supplies.

If we do so, we will enable our city and future generations of Americans to benefit from our sacrifice, our foresight, and our courage. We may also save their lives.

Gary Hart is the Wirth Chair Professor in energy, environment, and sustainability at CU. He served in the U.S. Senate from 1975–1987.