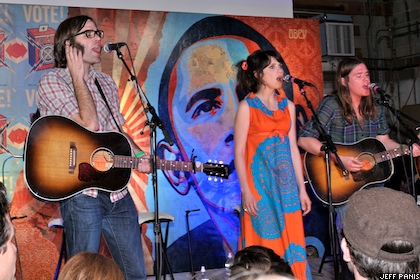 Hundreds of sweaty hipsters dancing in an art gallery isn’t exactly the first thing that comes to mind when you think of a political convention party, but that’s exactly the way the night ended at the Manifest Hope Gallery on Wednesday. Unconventional was organized by Manifest Hope, a joint collaboration between MoveOn.org, Upper Playground, Evolutionary Media Group, and Shepard Fairey, the artist responsible for the Hope and Progress Obama posters (as well as 5280’s August cover), along with San Francisco mayor Gavin Newsom. The evening began with an outdoor street concert, as 29th Street was blocked off between Larimer and Walnut to create a stage area outside the gallery. We arrived too late to see Nada Surf or Cold War Kids, but just in time to catch Newsom take the stage to introduce Clap Your Hands Say Yeah, and caught some of their set and the follow-up act, Silversun Pickups, in between browsing the Obama-inspired artwork in one of the galleries (where we ran into Moby, camera crew in tow). But the real party was yet to come.

After a bit of confusion about which gallery was actually hosting the VIP party, we got into line in a velvet rope scene straight out of a Hollywood movie and literally made it into the gallery just as it reached capacity and the doors were closed. Once the show got going inside, Sarah Silverman started things off with a brief comedy set, then introduced Gavin Newsom once again, who gave the night’s only real speech, exhorting the audience to make sure all this positive energy turned into actual votes in November. He then passed the mike to Greg Nickels, mayor of Seattle, who introduced the musical entertainment for the evening: an alterna-rock supergroup consisting of Ben Gibbard of Death Cab for Cutie, Zooey Deschanel of She & Him, Johnathan Rice, Jenny Lewis of Rilo Kiley, and Matthew Caws of Nada Surf. The band took turns playing acoustic versions of each others’ songs, as well as a few choice covers (Rice and Lewis dedicated “Love Hurts” to Obama and Hillary). Despite the occasion, it was a surprisingly apolitical performance. Maybe the band felt like the audience had heard enough speeches this week, or maybe they just wanted to stick to the music. They did close the set with a cover of Graham Nash’s “Military Madness,” but that was as political as things got.

Following the band’s performance, DJ Z-Trip took over the musical entertainment. Shepard Fairey made a brief pass through the crowd, and Daniel Dae Kim of the TV show “Lost” watched the band’s set from behind the stage, but mostly, the crowd seemed to consist of young conventioneers and artist-types looking for an excuse to let their hair down, and Z-Trip gave them the chance, spinning a mix of pretty much every danceable hit from the past 30 years (plus a few I wasn’t aware you could dance to), and keeping the crowd moving until the wee hours.