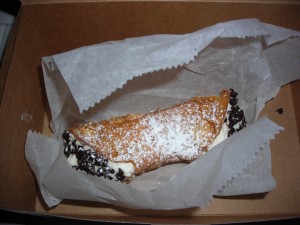 I can’t quite remember when I had my first cannoli from Mike’s Pastry in Boston’s North End. Maybe it was the trip in sixth grade. Or high school? Perhaps it was during college? Honestly, I’m embarrassed that I can’t remember. Who forgets the first time Mike’s big yellow signs invited them in off Boston’s raining streets? Or the saucers full of creamy cappuccinos that Mike and his family have served for the last 50 years? Or the groups of tourists and locals that crowd the display case? But I suppose my attention has been divided at Mike’s. Yes, I go to the shop for its historied vibe, but once I’m there, I head straight for the cannoli. Indeed, that’s what I did this weekend when I was in Boston. I walked past the golden macaroons, glanced briefly at the carrot cake, and ordered a cannoli. In my first bite, the crispy, golden pastry shell cracked into the super sweet ricotta cheese filling, and with the second, the miniature chocolate chips appeared, dense and dark in the sweet cream filling. It is Boston in a bite. A warm, Old World flavor rarely enjoyed at Denver dinner party. Last time I was in Boston, in late spring, I was so enchanted by Mike’s that I decided to bring home a few of the Italian pastries. I hoped that in the neatly tied blue-and-white pastry box I might also carry back a bit of big-city crowd and true Italian cooking. So, through airport security and airplane turbulence, I shuttled a box of Mike’s cannoli, planning to share them with dinner guests. Once back in the dry Denver air, I whisked open the package and pulled out the pastries. But when I picked up the first crispy shell, it sighed between my fingers. Having absorbed the humidity of its cream filling and the long ride home, the cannoli was limp. In the first bite, its shell disintegrated into the cream filling. The chocolate chips were pooled along the bottom of the box. My edible Boston had not traveled well, and it was with apologies that I served the much-hyped cannoli to my guests. I asked my diners to imagine crispy pastry shells and creamy smooth filling, explaining that the overnight flight and temporary refrigeration had not been kind to the pastries. Next, time I promised, I would arrange a morning flight so that we could eat cannoli the same day they were purchased. Later that night, though, alone washing the dishes, I acknowledged, with a blend of melancholy and sadness, that eating locally would probably have to apply to cannoli, too. Note: This trip, I did not bring any cannoli back from Boston with me.