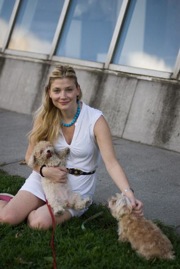 Like so many artists who don’t rest on convention, Marnie Stern is an acquired taste. Though her sometimes screechy voice and caffeinated, angular songs aren’t often love-at-first-listen, she’s well worth some attention.

Stern is analogous to Tufnel in a couple of ways. Her playing is impressively savage, creative, and cathartic, and she adopts Tufnel’s tools, using them progressively elsewhere.

For texture, she employs the hammer-on technique (think of the guitar line that runs through AC/DC’s “Thunderstruck”), which is difficult to use excessively without implications of cheesy gimmickry, but she pulls it off. In Stern’s hands, it’s percussive, weaving head-spinning rhythmic threads with the equaled talents of a technically accomplished and eccentric drummer (Hella‘s Zach Hill).

Stern’s lyrics, however, easily transcend the guitar-hero mold. A quick subject matter sampling of stereotypical metal music includes sex, drugs, and rock and roll clichÃ©, or teenager-inspiring taboos, like hell and nihilism. But Stern’s songs are endearingly philosophical–like pep talks for people who think too much, pushing for optimism and against lethargy.

This line from “Steely” is a good example of her positive thinking via abstract existentialism: “I’m like a raging animation/ I’m wondering what it’s like to be one/ I’m hoping it’s true / I’m hoping for you!”

Also on the bill tonight is Gang Gang Dance, a Brooklyn-based group pushing on the expectation of electronic indie rock and world music, and achieving inspiring results.