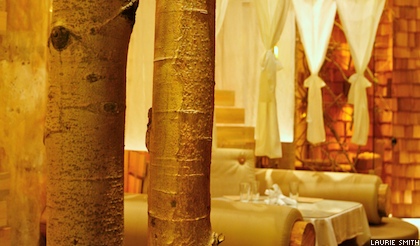 Kevin Delk and his business partner John Skogstad opened two restaurants, Two Fisted Mario’s and Double Daughter Salotto, before they tackled Beatrice and Woodsley. Experience had taught them that, when opening a restaurant, many factors are out of their control. So when construction frustrations and contractor setbacks slowed them down at their Baker location, they simply waited for the problems to sort themselves out. After almost a year of building the 20th-century, log-cabin-style restaurant, Delk and Skogstad opened Beatrice and Woodsley in mid-May.

When I moved out here [from Atlanta], I saw cowboys, but I knew that Denver and Colorado had more history. The state was a major thoroughfare during Western migration. I wanted to open a restaurant that showed this other history. Gathering the recipes for Beatrice and Woodsley, I looked at tons of cookbooks from the early 1800s. There were a lot of people bringing recipes over from the motherland. These recipes were from a time before measuring. They call for things like a “walnut of butter.” Pete [List, our chef] was a friend of a friend. He’s from Boulder and worked as a sous chef at Papillon with Radek Cerny for years before moving to Chicago. He was really longing to come home when we talked to him. We reinvented how the sink works for our bathrooms. We had to talk to seven different departments in the city offices to get it approved. Finally, they sent out someone in a wheelchair to test it. Our sink is now on file with the city engineering office as an alternative way to build a sink. The first night, like at the first audition for a school play, all our servers were very tense, even though they are seasoned veterans. There are a couple of points about the restaurant that really confuse people. We don’t allow people to just sit at the bar–actually we call it a counter.Â We designed it for dinner service, for people who didn’t necessarily want an intimate dinner but wanted to talk, dine, and learn. A lot of people are adamantly opposed to being seated there. But if they’re seated there once, people will request it again. For the first six months, we had a really steady group of regulars. Now, we are starting to get new guests again.