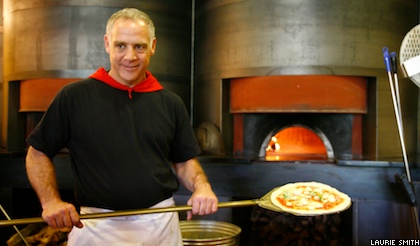 Just a year and a half ago, Mark Dym, his wife Kristy, and their three kids were living in Ft. Lauderdale, Florida. Dym owned a commodities company and lived three blocks from the ocean. But in all the 18 years he lived there, he could count on one hand the number of times he’d been to the beach. Finally, fed up with his life, Dym decided to open a pizzeria, and he planned to do it in Denver–close to the snowboarding his family sought out every winter during the holidays. Marco’s Coal-Fired Pizza opened in early June 2008.

I got online when we were still living in Florida to find out if you could even use coal in Denver–in some areas of the country, you can’t–and I found Jocelyn Robinson in the Mayor’s Office of Economic Development. Two weeks later she told me we could use coal in Denver, and that solidified it. [Editor’s note: Marco’s uses coal to cook its chicken wings and toppings, and wood ovens for its pizza.] We moved to Denver in May 2007 and bought our building in July 2007.

I’ve gotten lucky with the people I’ve connected to. When I arrived in Denver, I went to see Jocelyn and she told me about the different enterprise zones in the city. She sent me to go see [Ballpark], and I just loved it. It was edgy enough and really urban.

I went over and met John at Snooze. Through John, I got my designers, Xen Design, and a contractor. I dabbled in the restaurant business 30 years ago, but really everything I know I learned from Roberto Caporuscio [pizza consultant and president of Associazione Pizzaiuoli Napoletani]. I went to visit Roberto in New Jersey for three or four weeks when I was planning the menu, and he came out and helped me for two months when we first opened. It’s five days before our opening, I don’t know a soul, but I know I’m supposed to throw a pre-opening party. I called Leigh Sullivan, who now does my PR, and in six days, she organized a VIP party. Everyone was there: Patty Calhoun (editor of Westword); Gabby Gourmet. I made the decision to open when everything was right. We trained for three-and-a-half weeks. I call myself a pizzeria, not a restaurant. I wanted to keep it simple. No chefs. Pizza–I have it. Veal milanese–I don’t. This is the first professional thing I’ve done out of passion. I work 9 a.m. to 10 or 11 p.m., but I’ve never had such a good time. Before I worked four to five hours a day, and I was sick to my stomach. Here, I love coming in everyday.