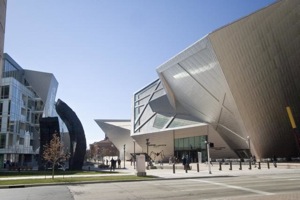 The Denver Art Museum will cut $2.5 million from its budget due to the tightening economy, according to The Denver Post, which writes that the amount represents about 12 percent of the museum’s 2009 fiscal-year budget. Visitors are not likely to notice any changes, director Lewis Sharp says, unless they planned to see a now-canceled exhibition of 17th-century Indian paintings from Ireland’s Chester Beatty Library, which was scheduled to start in July. Sharp says no layoffs are planned for the museum’s 200 employees, but the budget trimming is a precaution given anticipated drops in funding to the museum’s endowment and declining revenue via the Scientific & Cultural Facilities District sales tax.