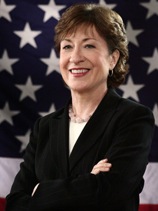 Last night, President Obama took his case for an $800 billion economic recovery package to national television in a final push to sell the public, and Congress, on a bailout to rescue a struggling economy in recession. That’s according to myriad news sources, including The New York Times, which reports that Obama warned “a failure to act will only deepen this crisis.”

Meanwhile, the plan spurred drama in the Senate. Colorado’s U.S. senators, Mark Udall and Michael Bennet, huddled in a room with a group of about 20 centrist lawmakers, who have qualms with the big price tag. Majority Leader Harry Reid claimed the senators, led by Susan Collins, a Maine Republican, were holding “the president of the United States hostage,” according to The Denver Post.

Senator Collins (pictured) wanted a stimulus of about $600 billion and was in a position to lead a filibuster, but instead relented. A final vote on the bill is expected today. Udall and Bennet both say they will support packages that trim billions.

For supporters of the plan, jobs are at stake. Yet Bob McGowan, a professor of management at the University of Denver, says even when the package passes, it will be months before jobs trickle in, according to 9News.