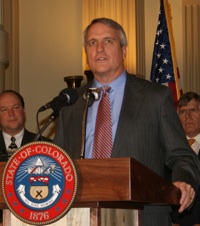 Governors across the country, including Colorado’s Bill Ritter, are doing battle to keep or bring jobs to their states in an effort to hedge unemployment, according to The Wall Street Journal, which reports that despite the slashing of state budgets, company bosses are still able to graze at a buffet of generous tax breaks and financial incentives.

While Ritter, a fellow Dem, says good schools are the “most effective vehicle for bringing jobs” to Colorado, he still seeks to cut more than $225 million from public education. Meanwhile, he’d double spending on business tax credits and incentive funds to about $18 million. Still, Ritter calls the number comparatively tiny.

A recent effort brought 500 Charles Schwab Corp. jobs to Douglas County in exchange for up to $1 million in incentives. And last month, Ritter fought to keep incentives in the budget for bioscience startups, according to the Denver Business Journal.