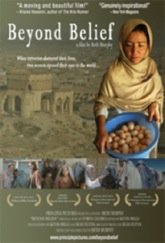 Bostonians Susan Retik and Patti Quigley forged a quick bond after September 11, 2001. The attacks on the World Trade Center killed both women’s husbands, leaving the two alone, pregnant, and at the heads of their households. Determined not to dwell on their pain, Retik and Quigley created a nonprofit to help Afghan women who were similarly suffering. Beyond Belief, a documentary that screens Thursday at the FilmCenter, captures Retik and Quigley’s heartbreak as well as the inspiring strength that women can draw from one another. Bonus: Beyond Belief filmmaker Beth Murphy will be at this week’s program. Thu, Mar. 5, 7 p.m. Starz FilmCenter; 900 Auraria Pkwy., 303-595-3456 $9.50, $25