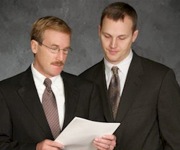 For four years, Colorado Senate Minority Leader Josh Penry worked as a staffer for former U.S. Representative Scott McInnis. Six years later, Penry might be soon taking on his former boss in a Republican primary race for governor of Colorado. Both Penry (pictured right) and McInnis are considering a run next year against incumbent Democrat Bill Ritter. A victory by either of them would mark the first Colorado governor from the Western Slope since Gunnison rancher Dan Thornton (namesake of the suburb) was elected in 1950. McInnis says he’s not relishing the prospect of facing Penry, who worked under him as a staff assistant, press secretary, and senior staffer from 1999 until 2003.

“Josh is somebody I have high regard for, so yeah, that makes it a little awkward,” McInnis says. “But I’ll tell you this,” he quickly adds. “If I go in the race, I go in the race to win.” Penry said earlier this week that he’ll decide whether to jump in the race for governor after the current legislative session ends in May. McInnis says he’ll announce his decision later this year. The two have clashed before. In 2006, Penry ran for state Senate against Matt Smith, McInnis’ brother-in-law. After McInnis backed and campaigned for Smith, Penry took swipes at McInnis–throwing back previous words of praise in his former boss’ face and saying McInnis only backed Smith because they were family.