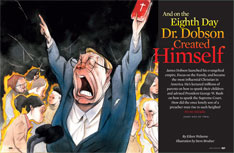 Women who work for Focus on the Family can ditch the dresses and pantyhose if they want. The Colorado Springs-based evangelical Christian organization has relaxed its “Leave it to Beaver”-like dress code so that the ladies may now wear Hillary Clinton-style pantsuits and the men can skip the neckties. Sorry, though, no 1980s-style spandex, writes the Colorado Springs Gazette, which reports that a tie-less Jim Daly, Focus’ president and CEO, received a standing ovation after the announcement was made. “During exit interviews, people always complained about the dress code,” Daly says, adding that the new code might help attract young tech workers. The Denver Post recently featured Daly, who told the story of his difficult childhood and being handpicked by James Dobson as a replacement to lead the organization so that Dobson could focus on other matters, such as his radio show. Dobson launched the empire to become the most influential Christian in America, as 5280 wrote back in 2006. And while Focus employees might be dressing down, the organization hasn’t backed down in the nation’s culture war. Just yesterday Focus criticized President Barack Obama for extending benefits to the same-sex partners of federal employees.