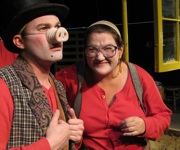 Some words, when tossed between men, act as knives, cutting into the soul as well as the deepest of insecurities. Most certainly not among them is the word “goose.” Unless of course you’re reading the absurd Ukrainian story The Tale of How Ivan Ivanovich Quarreled with Ivan Nikiforovich–or watching its recent theatrical adaptation, TheÂ Squabble, at Buntport Theater. In this 1835 story by Nikolai Gogol, compare a man to that fat, waddling bird and all hell breaks loose. Buntport’s latest production follows Bob Boxinoxingworth and Bob Luggalollinstop as one calls the other a “goose,” starting an argument that eventually involves the entire town, including the pig (also the play’s narrator). The story is told with Buntport’s usual Monty-Python-esque touches and has garnered widespread audience acclaim since it opened last month. Through June 20. Thu-Sat 8 p.m.; Sun 3 p.m. $16 Buntport Theater, 717 Lipan St., 720-946-1388