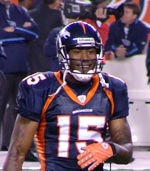 It appears Brandon Marshall’s time in Denver is coming to an end.

“Life is filled with change, and where I am in my life now change is probably best,” Marshall wrote to Denver fans on his website yesterday. He didn’t leave much doubt.

“It’s hard leaving an organization ran (sic) by one of the best owners in all of sports, and someone who’s been there for me through my ups and downs.”

Team owner Pat Bowlen apparently told Marshall’s agent over the weekend that he would do everything in his power to trade him, according to Fox 31.

The Baltimore Sun reports that the Baltimore Ravens are interested in Marshall and would possibly give up first- and third-round draft picks to get him. They’re also reporting that the Chicago Bears are interested in reuniting quarterback Jay Cutler and Marshall. The Denver Post says there’s no indication the Broncos will deal Marshall, with coach Josh McDaniels saying he’s going to continue to talk with Marshall and looks “forward to having Brandon at training camp.”