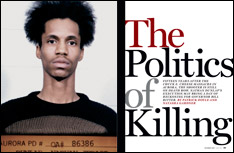 Against the backdrop of the state Legislature’s failed attempts to abolish the death penalty, Arapahoe County District Attorney Carol Chambers defended her decision to seek lethal injection for Robert Ray. Jurors were convinced that death was just and placed Ray, already convicted in the 2005 murders of Javad Marshall-Fields and his fiancÃ©e, Vivian Wolfe, on death row with his co-conspirator, Sir Mario Owens, according to The Denver Post. Marshall-Fields was set to testify against Ray and Owens in a separate slaying case. Asked about a tattoo on 23-year-old Ray’s back that reads, “Crime Pays,” Marshall-Fields’ mother commented, “It does pay. He’s going to pay with his life.” The jury voted unanimously for the death penalty in Marshall-Fields’ death, but Ray received life without parole for the murder of Wolfe. Ray had asked to be spared, arguing that he experienced a tough childhood in the projects on the south side of Chicago (via 5280). Before the case, Nathan Dunlap, who was convicted of a shooting massacre at a Chuck E. Cheese in Aurora more than 15 years ago, sat alone on death row (via 9News). Delivering death in Colorado is complicated, as Dunlap’s case illustrates in 5280’s “The Politics of Killing.”